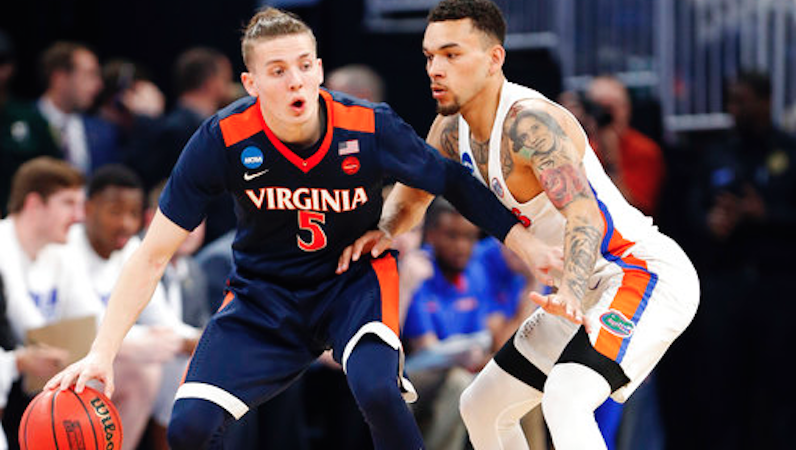 Kyle Guy connected on 49.5 percent of his three-pointers during his freshman season.(AP Photo)

The 2016-17 season was an up-and-down affair for Virginia freshman Kyle Guy. As a rookie, Guy was in and out of the rotation and went through a prolonged midseason shooting slump. For the most part, though, it was a productive immersion to the ACC.

Guy finished No. 7 in the nation in three-point shooting percentage, per KenPom: 49.5 percent. According to Synergy Sports, Guy scored 1.3 points per possession (46.3 percent) on spot-up possessions, which ranked fourth in the ACC. Guy shot 45 percent on catch-and-shoot opportunities, too. This is the profile of a prolific shooter, which is also the perfect complement for Virginia’s mover-blocker offense.

Guy’s shooting and off-the-ball movement can space the floor and warp defenses. Let’s take a look at a play Virginia ran in its 53-43 victory over North Carolina in February.

What’s a pindown screen? How did they utilize it here?

At its core, a pindown is a simple off-the-ball screen that’s used to free up a player for open catch of the basketball. It can be referred to as a down screen, too. Teams can use this basic motion action to get players clean looks for catch-and-shoots. Pindowns can also be used as the initial action at the outset of the play — the first movement before going into a pick-and-roll or swinging the ball back to the opposite side of the player. It forces defenses to fight through screens, rotate and, at times, switch.

On this play, freshman forward Mamadi Diakite sets the pindown for Guy. Diakite doesn’t do the best of job screening Nate Britt, but he forces the UNC guard to at least take a wide angle running around the screen. Guy, an explosive athlete, stutters like he will initially come off a down screen from Isaiah Wilkins before darting toward Diakite on the opposite block. He flies off the pick and makes sure to get both feet planted beyond the arc for the trey. Boom.

Get used to seeing this

According to Synergy, Guy used 100 possessions in 2016-17 coming off screens — more than any other play type (42.2 percent). He was one of just three players in the ACC this season to hit triple-digits when it comes to this distinction; the other two guys won’t surprise you, either. Per Synergy, Justin Jackson recorded 140 off-screen possessions, which was the most in the conference. London Perrantes, Guy’s teammate at UVA, used 132 possessions coming off of a screen.

Despite playing far less than both Jackson and Perrantes, Guy racked up a preposterous number of off-screen possessions. Not only that, Guy shot a higher percentage and was more efficient than two of America’s best last season.

Now, of course, not all of these screens were of the pindown variety. However, it’s one of Guy’s preferred play types. In games when Guy cooked from deep, he squared up at least one or two long balls coming off pindowns — his 19-point outburst against NC State stands out in this regard.

Next season, Guy will play a lot more, and without Perrantes, he may be the central figure in Virginia’s offense, with Ty Jerome running the point. Get used to seeing the sophomore wing flying off an endless barrage of screens.