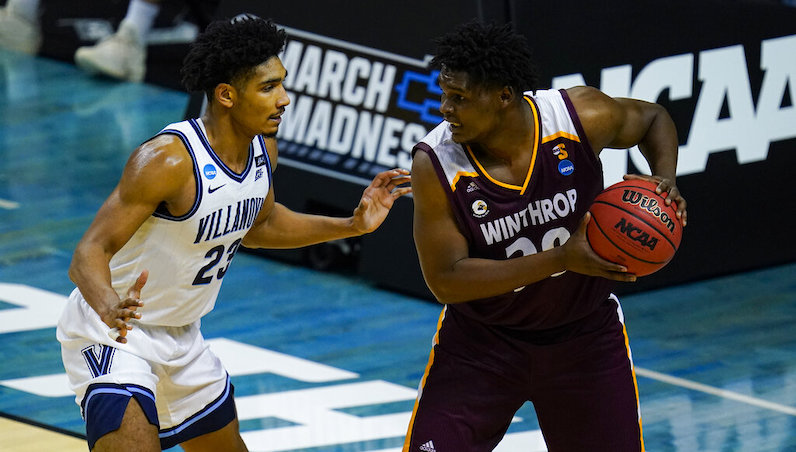 DJ Burns will head back to a Power 6 conference for the 2022-23 season. Burns started his college career with Rick Barnes at Tennessee; however, he emerged as a player over the last three seasons for Winthrop. Now, Burns has committed to NC State

The 6-foot-9, 275-pound center is a highly-productive offensive player, on a per-possession basis. Burns can really score and make plays inside of 17 feet. As a junior, Burns averaged 15.0 points per game, while playing a career-high 20.9 minutes per contest — with a massive usage rate of 32.0 percent.

Burns shot 62.6 percent from the floor this season, another career-best number, including 76.4 percent at the rim. For his career, Burns (30.7 percent usage rate) has made 60.0 percent of his field goal attempts. Burns is an efficient interior finisher despite playing below the rim: he finished with only four dunks this season.

As efficient as Burns can be in the paint, his play style is a departure from the prototypical NC State center under Kevin Keatts. NC State’s offense featured most post-ups down the stretch of the 2020-21 season; however, Wolfpack centers over the last five seasons have primarily been screen-roll divers.

NC State, under Keatts, is a high-volume pick-and-roll offense. Omer Yurtseven was a pick-and-pop 5-man, who could also dive to the cup. Lennard Freeman, another holdover from the Mark Gottfried era, was a screen-roll diver and offensive rebounder. Sacha Killeya-Jones never suited up for NC State, but he was in this mold, too.

Currently, Ernest Ross and Ebenezer Dowuona fit that mold as well. Prior to his de-commitment, it looked like 2022 center Shawn Phillips would be next.

Look at this gorgeous, manipulative effort from Smith, working out of the pick-and-roll. Georgia Tech puts two on the ball — given Smith’s pull-up abilities. Smith leverages that gravity, GT’s help defenders space out and Dowuona is open for the spike.

Previously, Keatts used one other ground-bound center at NC State: Wyatt Walker in the 2018-19 season. Most of his other centers, though, are of the run-jump variety. Screen and roll the rim on offense, then protect the paint on defense while playing drop coverage.

Historically speaking, Keatts’ offenses don’t feature many post-ups — dating back to his time at UNC Wilmington.

This isn’t to say Burns is unable to roll. In fact, he has the ability to create opportunities as a screener with his size and strength. Winthrop ran snug pick-and-roll action with Chandler Vaudrin and Burns, as the screener. On this possession, Winthrop runs Vaudrin (No. 52) off a shuffle cut and into an inverted post-up look for the 6-foot-6 point guard. Once Vaudrin has the ball, Burns comes over and sets a snug ball screen, with an empty corner.

Burns may even have untapped short-roll potential, especially if Smith returns as one of the more explosive on-ball creators in the country. However, Burns is most comfortable on that side of the floor working as a low-post hub.

DJ Burns: On The Block

By comparison, NC State used 105 post-up possessions this past season, scoring 75 points, per Synergy Sports: 0.71 points per possession. The majority of those post-ups went to Jericole Hellems, who liked to isolate in the mid-post area.

Now, Burns is a good face-up/midrange shooter. He connected on over 50 percent on his long 2-point attempts over three seasons with Winthrop. His range, however, stops there. Burns attempted only five 3-pointers in his college career, so far, missing all five shots.

Since he offers no real stretch potential to NC State’s frontcourt, things may be tough. It’ll be borderline untenable for the offense to play any combination of Ross, Burns, Dowuona and Dusan Mahorcic together at the same time. (Keatts, however, doesn’t have many options. 6-foot-8 La Salle transfer Jack Clark is the one wing/hybrid forward on the roster, now that Hellems is gone.)

Plus, NC State switches 1-4 defensively. Pairing Burns and Dowuona together would force one of those guys to switch around and defend in space. Dowuona has some ground-coverage skills and he works hard, but that’s not his forte. The 6-foot-9 Ross (6.4 percent block rate) has upside as a switch defender, which is a possible defensive boon.

Unfortunately, Ross and Burns together creates spacing concerns for the offense. This is similar to the issues NC State ran into with Bates and Funderburk on the floor together, although Keatts didn’t lean on that duo as an on-floor partnership until a Jan. 2021 injury to Devon Daniels forced his hand.

NC State was +24 in 302 minutes with Bates and Funderburk on the floor together in the 2020-21 season, per Pivot Analysis. Pick-and-roll actions don’t hit the same when another big man is already in the paint, clogging up the lane for a potential rim-run.

The majority of those minutes, with Bates and Funderburk on the floor together, occurred over the final eight games of the season: +25 in 176 minutes, including an offensive rating of 117.2 points per 100 possessions. This stretch overlapped with the first emergence of Dereon Seabron as a redshirt freshman, a hint of things to come for him as a sophomore.

Missed too many open looks, but this was a clinic in terms out-of-bounds play design from the Wildcats

Ross and Dowuona played only two minutes together in the 2021-22 season, according to Pivot Analysis.

Assuming Burns translates to the ACC as an efficient low-block scorer, then NC State can use him as a fulcrum of sorts. For his career, Burns shot 57.3 percent on 2-point attempts vs. Top 100 opponents. And if Burns commands a double team in the post, then someone else is open. Burns, who has a career assist rate of 14.7 percent, has shown an ability to pass from the post.

This presents a new, interesting scenario for Keatts and NC State. The Wolfpack could, essentially, run two different offenses. When Ross or Dowuona are in, it’s heavy spread pick-and-roll looks. With Burns on the floor, NC State could alter the offensive blend and run more post-up actions.

Here’s a designed after-timeout set from NC State — from its “Buckeye” action — to create a post-up for Funderburk.

This could work; Burns functioned in a platoon system at Winthrop. Some of that may be related to his conditioning; however, this structure was also by design.

During the 2020-21 season, before Pat Kelsey left for the College of Charleston (replacing current Boston College coach Earl Grant), Winthrop (23-2) was one of the premier go-go teams in college hoops. According to KenPom, the Eagles ranked inside the Top 15 nationally in both average offensive possession length (15.0) and adjusted tempo. Winthrop’s bench accounted for 42 percent of the team’s total minutes, another Top 15 number in Division I.

It’s established: Burns is a productive player, one that can do a lot of damage in a relatively short amount of time. Burns would also work as a solid target in the dunker spot for Smith (if he’s back) and Jarkel Joiner.

Raising The Floor and The Ceiling: Baby T

Ultimately, so much of next season’s potential depends on what Smith decides to do: Remain in the 2022 NBA Draft or play in college for another season. Both are good options. Smith is a ridiculous talent; an enterprising NBA franchise would/should consider the “pre-draft” approach with Baby T, and give him a first-round guarantee now. If returns to the Pack, though, Smith will make a lot of money via NIL and get full control of NC State’s offense.

Regardless, it’s hard to state just how much of a game-changer Smith is for NC State. If he’s back, Smith is arguably the best player in the ACC next year. He’d also return as one of the top draft prospects in the country, with the upside to become a 2023 lottery pick. Hypothetically, this approach is similar to what we saw this season with Jaden Ivey, Bennedict Mathurin, Johnny Davis and Keegan Murray.

The addition of Burns would provide Smith with another high-usage/gravity target on offense. The two-man actions and combination play between those two is something to dream on — for now at least.

If Smith remains in the NBA Draft — he has until June 1 to decide — then Burns takes on added offensive importance. All of a sudden, Burns becomes the best bucket-getter on NC State’s roster. In crunch-time and other leverage situations, Burns has the ability to be a go-to guy.