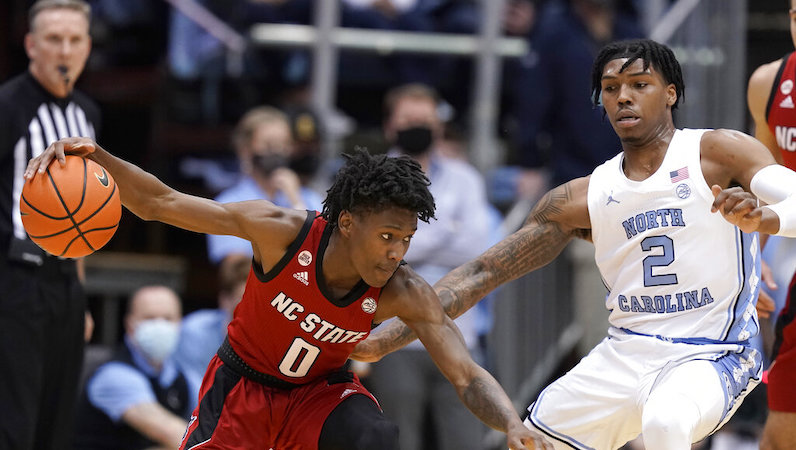 It’s been an incredible rise for Terquavion Smith. After just cracking the Top 100 of the 2021 recruiting class, Smith put together a monster freshman season for NC State. Now, Smith (as expected) will enter the 2022 NBA Draft, while maintaining his college eligibility.

What a rise for Terquavion Smith: some of the best handles in the 2022 Draft class — plus a dynamic shot-maker with unlimited range, off the catch and with his own handle

Early in the season, Smith started to flash as a potentially special scorer; however, his game grew and grew as the year progressed.

Armed with some of the best handles in college basketball this season, Smith can create his own shot with ease: over 76 percent of Smith’s 2-point field goals were unassisted. According to Synergy Sports, Smith scored 1.05 points per isolation possession.

Smith, who averaged 18.3 points per game in ACC play (40.1 3P%), is a nutty shot-maker. He will take and make tough, contested looks from multiple levels of the floor.

However, when Smith needs to press the Turbo Button, the freshman from Farmville can get downhill and attack north-south in a hurry.

When Smith drives, he really wants to get to his left hand. I didn’t watch every NC State game this season, but I caught the vast majority and charted Smith with 13 dunks attempts this season — successful dunks, misses and shooting fouls. All 13 came with his left hand.

(This is something that former All-NBA point guard John Wall, another product of North Carolina, became known for in the NBA.)

Smith is one of the premier shooting talents for this draft cycle, too. As a freshman, he led all ACC players with 260 3-point attempts, making 96 (36.9 3P%), which was the most of an ACC player during the regular season. Those 96 3-point makes shattered the previous freshman record at NC State, which was set by Maverick Rowan with 81 3s in the 2015-16 season.

Smith has a quick release and absolutely bonkers shooting range. He won’t hesitate to let it fly, either, which results in crazy 3-point attempt volume: 15.2 3-point attempts per 100 possessions.

Unsurprisingly, Smith was the only player in the country this season to attempt 15+ 3-pointers per 100 possessions, shoot 35+ percent on those attempts and record 10+ dunks.

According to Synergy Sports, Smith scored 1.19 points per spot-up possession this year (60.2 eFG%), a Top 8 number in the ACC among players with 100+ possessions.

Dereon Seabron and Smith formed a beautiful partnership. With Seabron — a dynamic downhill driver — collapsing the defense, Smith could float around the perimeter, looking to snipe.

NC State paired Seabron and Smith together in actions, looking to scheme up some designed slash-and-kick opportunities, including this Ram Spain pick-and-roll set at Wake Forest.

Smith’s quick release and deep range translate to his ability to shoot off the bounce, too. This is really nice patience from Smith in the pick-and-roll vs. Wake Forest. He keeps his dribble vs. Wake Forest’s Ice coverage; when Dallas Walton drops to the paint, Smith gets to his step-back jumper over Daivien Williamson.

When the ball screen comes in the middle of the floor, Smith looks to do damage from distance. If the screen defender isn’t at the level, Smith let it rip.

If an opponent switches that ball screen action, Smith can get busy in a number of ways, including his step-back 3-pointer. Anthony Walker is an excellent frontcourt athlete, with great length; however, Smith makes this step-back attempt look effortless.

This time, Virginia’s Jayden Gardner switches out on Smith, which produces the same result: 26 percent of Smith’s 3-pointer this season were unassisted.

With that handle, Smith has the ability to create space and separate from defenders. Mix that with his shooting range, creativity and scoring institution and you have a really

Here, Smith goes to work vs. John Butler, an impactful 7-foot-1 switch defender. When a player can shoot off-the-dribble from this far away, it puts tremendous pressure on his defender.

When the pick-up point for a defense comes high or early in the possession, a player like Smith can leverage that pull-up gravity and use it to get downhill.

Ideally, Smith (26 percent usage rate) would’ve gotten to the line more this season: 3.4 fouls drawn and 3.4 free throw attempts per 40 minutes. He can be jumper-dependent at times, or look to avoid contact when attacking while going for a more artful finish.

This could be low-hanging fruit for Smith to grab, though. He has the craft and twitch to create advantages; the next step will be using those tools to create pathways for easier scoring opportunities.

Smith’s shot and handle can also help open up the floor for his teammates as cutters. He dished out 2.7 assists per 40 minutes this season.

The range and fluidity of Smith’s jumper speak to his upside for the next level. Smith will obviously need to get stronger and improve his overall processing on offense, but there’s no denying his skill level and potential high-end development curve.

Hypothetically, Smith may offer an NBA franchise drafting later in the first round a shot at unearthing possible star with a lesser-value pick.

Smith left the door open to return to college; if he comes back to NC State, he’ll enter the 2022-23 season as one of the best players and arguably the top prospect in the country. Nowadays, this pathway at least comes with some serious money via name, image and likeness.

However, if he feels ready to make the jump, or if a team gives him a promise, then he should make the jump. All it takes is one team.

With Smith in the draft, NC State and Kevin Keatts must continue to push for additions in the transfer portal. Ole Miss transfer Luis Rodridguez, a versatile wing defender, enjoyed his visit to NC State’s campus last week. The Wolfpack need more, though, especially with Dereon Seabron going to the draft, too, Manny Bates in the portal and Cam Hayes headed to LSU.