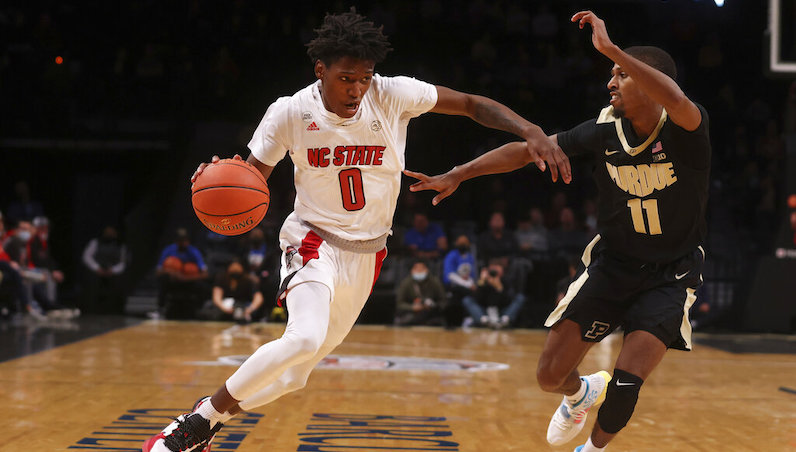 Terquavion Smith hit the ground running when NC State opened the 2021-22 season. In wins over Bucknell and Colgate, the freshman guard scored 32 points in 55 minutes. As the first two months of the season have unfolded, Smith has shown the makings are an intriguing guard prospect — a volume-scorer, wired to get buckets.

When the calendar flipped to December, NC State seemingly started to play only chaotic basketball games. The four-overtime win vs. Nebraska. The late-game, shot-clock beating 3-pointer from Matt Cross as Louisville escaped Raleigh with a victory. One week later, the near-victory/overtime defeat vs. Jaden Ivey and then-No. 1 Purdue up in Brooklyn. Less than a week later, in another neutral-sit matchup, NC State fell in a back-and-forth affair with a veteran Richmond squad.

During this stretch, Dereon Seabron has been a constant for the Pack: relentlessly attacking downhill and pounding the offensive glass. (According to Synergy Sports, Seabron is shooting 70 percent on put-back attempts this season.) Ebenezer Dowuona continues to improve as a defensive anchor — playing nowadays with a little more restraint. Cam Hayes has shown signs of life with his pull-up 3-ball after a frigid start.

Smith is coming along, too, which is a potentially crucial development for an offense that needs secondary playmaking.

One of the most accomplished scorers in North Carolina high school basketball history, Smith is a bucket and a problem, as the kids would say. The process of acclimating to college basketball isn’t easy, though, even for talented guards.

At 6-foot-4, 160 pounds, Smith isn’t an overwhelming physical presence, either. He’s not Paolo Banchero; Smith can’t just go to the block looking for contact and fouls when the jumper isn’t falling. Instead, he must pick his spots and find other ways to contribute. This balancing act is a real challenge.

Smith is by no means slow or plodding, but he’s more of a glider with the basketball. He uses his craft and handle to get to places on the floor.

This means that Smith will take plenty of tough shots. Some nights, those shots simply won’t go in, which will lead to some unpleasant box scores. For the season, Smith is shooting under 43 percent on his 2-point attempts, including 48.3 percent on attempts around the rim and 22.6 percent on off-dribble jumpers in the half court, per Synergy Sports.

(What is encouraging about Smith’s rim finishing, though: there’s decent volume and 71 percent of his makes have come unassisted.)

Smith’s shot selection will improve over time, and there are other ways he can help keep the offense moving. After attempting only 14 free throws across the first nine games, Smith went 15-of-18 (83.3 FT%) from the stripe vs. Purdue and Richmond.

By leveraging his scoring prowess, Smith has also shown some intriguing flashes as a passer.

Get In Formation: PnR

There’s no shortage of ball screens in NC State’s offense, which works to Smith’s favor, too. According to Synergy Sports, Smith is scoring 0.82 points per pick-and-roll possession this season. This ranks third among ACC freshmen with 25+ possessions — behind Duke’s Trevor Keels and Blake Wesley of Notre Dame.

One of the ways Kevin Keatts opens up pick-and-roll opportunities for his secondary creators comes from NC State’s Iverson ball screens set. It’s a simple design, one that NC State will use frequently, with a few small wrinkles to throw at defenders.

The Wolfpack start in a 1-4 High alignment. To launch the action, the targeted pick-and-roll initiator will run across the formation — going over the top of of two screens from NC State’s 4 and 5, at the elbows. That’s the Iverson cut; it’s used to then flow into empty-side pick-and-roll/pop action.

Seabron has been awesome as a ball-handler/driver (especially going to his left) with this action this season. However, when Jericole Hellems is on the bench and Seabron is the de facto 4-man, the electric wing from Norfolk can be used as a screener for Smith.

Of course, Smith can dip into his inner Allen Iverson — when the situation calls for it. If his defender trails him tightly across the Iverson screens, then Smith doesn’t need to wait for the pick-and-roll; he can immediately turn the corner and get into the paint.

This is an area where Smith can have an impact: shooting off the catch.

According to Synergy, Smith has scored 1.05 points per spot-up possession this season, including an effective shooting rate of 56.9 percent on spot-up no-dribble jumpers.

Smith, who is shooting 34.8 percent from beyond the arc, leads NC State with 8.2 3-point attempts per 40 minutes.

Hayes struggled right out of the gate, although he’s done damage in recent games when opponents have gone under him on ball screens.

Virginia transfer Casey Morsell got off to a great start shooting the ball. Unfortunately, Morsell sprained his ankle vs. Nebraska and has made only one 3-pointer over the last four games, two of which he missed due to the injury.

As awesome as Seabron is, he’s limited as a jump-shooter. That doesn’t mean he’s afraid to shoot it; Seabron will get shots up. For now, though, NC State’s offense is at its best when the ball is in his hands, which means NC State needs as much shooting/spacing around Seabron as possible.

As ACC play looms, more teams will continue to focus coverages on Seabron — extra defenders and extra attention. Smith will get his fair share of open 3s. He’ll need to make opponents pay.

The majority of those minutes (62) have come with Hellems on the floor, too. The Wolfpack are +31 in 62 minutes with Hayes, Smith, Seabron, Hellems and Dowuona playing together. That’s been the starting lineup for the last four games.

These are all small samples to draw from, but it’s rather encouraging. NC State has pretty good offensive personnel on this roster; there are multiple players that can run a pick-and-roll and create.

Dowuona helps solidify the defense, while also setting dozens of ball screens per game on offense. If Dowuona can continue to emerge as roll finisher — catching lobs, diving hard to the rim — the more opposing defenses will factor his movements into their rotations.

In turn, this will help open driving lanes up for Hayes, Smith and Seabron, which will generate shots at the rim, free throws and kick-out 3s.

NC State has a narrow rotation: less than 26 percent of the team’s on-floor minutes this season have come from bench players, according to KenPom. With Morsell Back, though, along with the emergence of Smith and the versatility of Seabron, it’ll be interesting to see how often Keatts uses the quartet of Hayes, Smith, Morsell and Seabron together.

The numbers aren’t great, but this could be an important group when Hellems needs to sit or is in foul trouble. So far, that group -13 in 25 minutes, per Pivot Analysis.

With POY aspirations, how Dereon Seabron plays at an All-ACC level