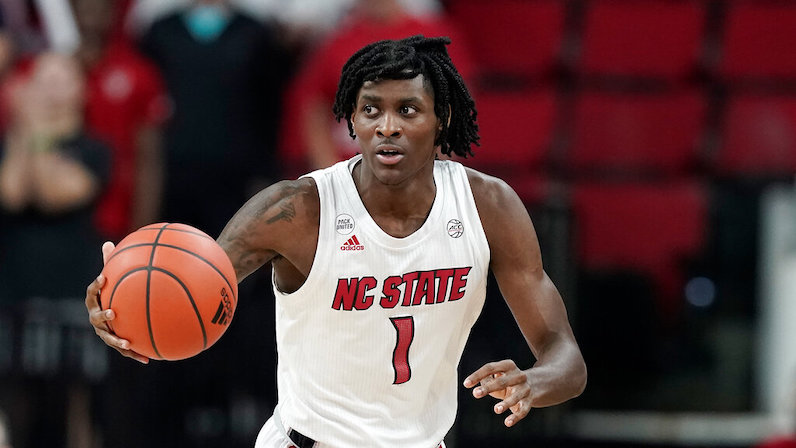 With a limited rotation and a slumping point guard, NC State is trending in the wrong direction. However, the Wolfpack changed up the rotation, leaned on Dereon Seabron and nearly took down Florida State over the weekend in Raleigh.

Let’s take a quick look at how Kevin Keatts deployed Seabron and how Florida State countered with Malik Osborne and a small-ball solution.

When NC State hit the floor vs. FSU, the Wolfpack looked structurally different. Sophomore point guard Cam Hayes, who started the game on the bench (for the first time all season), played only 14 minutes. That’s the fewest minutes in a game for Hayes since midway through his freshman year.

Instead, the ball and the offense were placed in Seabron’s hands.

However, in the Florida State game, the redshirt sophomore took over primary-creator duties, essentially functioning as the team’s point guard.

Keatts went with more shooting around Seabron, who responded emphatically: 32 points, 11-of-12 on shot attempts at the rim, 11 free throws attempts and seven assists.

It was nice to see Seabron attacking downhill and getting into gaps from off the catch — when the ball was swung around vs. a scrambling defense.

He’s just so good at applying his length and using his strides to slither around defenders. For a second, it’ll look as though a defense has Seabron bottled up, but he’ll counter with Euro-step or side-step into a pocket of space and finish.

All seven of Seabron’s assists resulted in 3-pointers, including five triples from freshman gunner Terquavion Smith. Add it up: Seabron scored or assisted on 53 of NC State’s 81 points.

The Seabron-to-Smith connection is becoming a really fun slash-and-kick partnership, too.

To that point, the majority of Seabron’s production vs. Florida State — and every other team, really — came off his ability to get downhill with his dribble, either in transition or in the half court, or when he went to work on the offensive glass.

Seabron plays the game with an attitude that’s hellbent on getting to the rim. For the season now, he’s shooting a ridiculous 59.3 percent on his 2-point attempts.

According to Bart Torvik’s shot data, 83.6 percent of Seabron’s field goals have come around the basket this season. He’s shooting 61.4 percent on those looks. The majority of those finishes — nearly 75 percent — have come unassisted, including put-back buckets.

Seabron is shooting 70 percent on put-back attempts after an offensive rebound this season, per Synergy Sports.

Cam Hayes is a talented young guard — one with intriguing pull-up shooting potential and vision as a pick-and-roll passer. Unfortunately, he struggles getting to the rim and creating advantage. More often than not, Hayes has to play off the gravity of his pull-up jumper to force coverage rotations.

When the shot is rolling — as it was vs. Richmond — Hayes will punish teams that go under the screen on pick-and-rolls.

Unfortunately, it’s been a chilly start for Hayes. He’s shooting just 23.7 percent from downtown (14-of-59 3PA) and 37 percent on long 2-point attempts. According to Synergy Sports, Hayes has connected on just 27.6 percent (32.9 eFG%) of his off-dribble jumpers this season.

Moreover, less than 19 percent of his field goal attempts have been close 2-point attempts this season, per Bart Torvik’s shot data. Hayes is drawing only 3.4 fouls per 40 minutes and his free throw attempt rate is down slightly from last year: 24.5 percent.

Hayes is a pick-and-roll guard; it’s not like he’s allergic to getting in the lane, either. He’s capable. However, if Hayes isn’t consistently touching the paint with his dribble, forcing rotations and kicking out, then it gums up the rest of the offense.

If the rock is going to be in Seabron’s hands, then Hayes needs to show that he can play off the ball. Hayes has the ability to be a good catch-and-shoot target; he’s scored 1.06 points per spot-up possession on no-dribble jumpers this season, according to Synergy. With that said, he’s shown little as a cutter or attacking closeouts.

Hayes flashed some closeout/catch-and-go abilities during his freshman season. NC State needs more of this, though.

There’s some version of NC State’s offense where both Seabron and Hayes are able to collaborate and split the playmaking duties. In this scenario, the Pack wouldn’t have to overburden Seabron and would force opposing defenses to fret over dual ball handlers.

However, until Hayes shows that he can produce as the offense’s primary engine or as a second-side creator next to Seabron, Keatts can roll with Smith, Casey Morsell and Thomas Allen. (Breon Pass has had some nice moments in recent games, too.)

The hope should be for Hayes to find a groove in these situations — playing off Seabron. Once that happens, it’ll open up other aspects of his game. Hayes is a good shooter; the pull-up efficiency will improve. When that happens, though, Hayes must capitalize by getting into the lane with greater frequency.

Florida State’s defense can be one of the most intimidating collective forces in all of college hoops. Once again, Leonard Hamilton’s club is huge; Florida State ranks No. 1 nationally in average height, per KenPom. FSU picks up full court, switches all actions — up-the-line, 1-5 — and aggressively denies passing lanes.

Keatts entered the matchup with a solid game plan to poke at Florida State’s switch scheme. NC State organized half-court pick-and-roll for Seabron (or Hayes) by using screen-the-screener action into a ghost screen.

In many ways, this setup looked similar to how Seabron was used down the stretch vs. Louisville: give him the ball, give him a screen and let him work.

On this possession late in the second half vs. FSU, while Seabron dribbles high, Jaylon Gibson screens off the ball for Jericole Hellems, who lifts up seemingly to set a ball screen for Seabron. (This type of screen-the-screener action can be referred to as “Ram” action.) However, before Hellems screens RayQuan Evans, he ghosts out — or slips out. This is a nice counter vs. Florida State’s switch.

FSU handles the action pretty well here, but Seabron goes to work on a switch vs. Caleb Mills.

Here’s that same action again: this time, though, Smith runs the ghost action. Seabron attacks the switch with Mills, draw help and sprays it out for a Smith 3.

Once more, Ebenezer Dowuona sets the Ram screen for Hellems, which causes FSU to switch off the ball. Hellems then runs the ghost action vs. a scrambling/switching Florida State defense. This creates a lane for Seabron, who is so freaking good at using his long strides to slink into gaps in the final third of the floor.

Even Hayes managed to get into the paint off this same Ram Ghost screen action, which essentially catches Florida State in between two switches. Hayes gets matched up with the 7-foot-4 Naheem McLeod and burns him to the basket.

This is the Hayes NC State needs to see more off, too.

NC State opened the contest, though, with another type of screen-the-screener (STS) pick-and-roll action. Allen sets a little brush screen on John Butler, the man guarding Hellems, which causes Mills to switch on Hellems. As that happens, Hellems lifts to set an empty-side screen for Seabron. Instead of actually screening Anthony Polite, though, Hellems ghosts out to the corner; Seabron drives left and off a ball screen from Dowuona.

NC State successfully went to this action several times on Saturday. (When the screen-the-screener pick-and-roll action takes place on a side screen-roll look, I like to refer to it as “Wedge” action.)

The Wolfpack will run this Wedge look against gap defense, too, like Virginia and Louisville. Here’s a little roll-replace action with Seabron last season vs. UVA, which results in a corner 3 for Hellems.

This is good on-ball defense from Louisville’s Jarrod West, who is darn good at the point of attack. However, Hayes shows off some of his shot-making skills.

NC State also dialed up some Spain/stack pick-and-roll after a timeout in the second half. From an after timeout (ATO) look: Dowuona sets a ball screen for Seabron, which FSU switches. As the big man rolls, Allen sets the back screen on Dowuona’s new defender, which FSU switches again.

The end result: Seabron wins another race to the rim.

For three years now, Malik Osborne has been one of the better role players and two-way frontcourt pieces in the ACC. Osborne guards every position, 1-5, rebounds the hell out of the basketball and shoots a great ball. While predominantly working as a play-finisher, Osborne rarely turns the ball over (10 TOV%), too.

Essentially, Osborne helps amplify the talent around him and takes almost nothing away. He’s an ideal low-mistake veteran leader.

Hamilton and Stan Jones can feature Osborne in a plethora of manners, including as a “small-ball” center. Yes, the tallest team in the country — as has been the case all three years with Osborne in the rotation — can go marginally smaller (take a 7-footer off the floor) and use the 6-foot-9 Osborne as a tool for opening up the offense.

The lineup with Osborne as the lone true big man on the floor were huge for FSU vs. NC State.

With 7-footers Tanor Ngom and Quincy Ballard out of the lineup, the reliance on downsizing is even greater.

During the NC State game, FSU played 21 minutes with Osborne on the floor and McLeod and John Butler on the bench. (Butler isn’t really a true center, but the 7-footer is super talented and intriguing as a defensive prospect. At times, he functions as FSU’s center.)

Florida State outscored NC State by 12 points in those 21 minutes, including an offense that produced 1.52 points for possession. Here, the extra spacing spreads out NC State’s defense, which opens up the rim for stud rookie Matthew Cleveland.

Osborne even took advantage of NC State mixing up pick-and-roll coverages. NC State usually switches 1-4 and plays the center to the level of the screen in pick-and-roll looks. However, the Pack looked to switch more liberally 1-5 vs. FSU (and some with Ernest Ross in the Miami game).

Those exchanges weren’t handled with flawless execution, though, including the back-side help. With Dowuona primed to switch and the weak side lifted, Osborne took advantage and slipped this empty-corner screen.

For the season now, Florida State is +35 in 156 minutes with Osborne as the de facto 5. During those minutes, Coach Ham’s crew have scored 119.1 points per 100 possessions.

Once again, Malik Williams rounds back into elite defensive talent