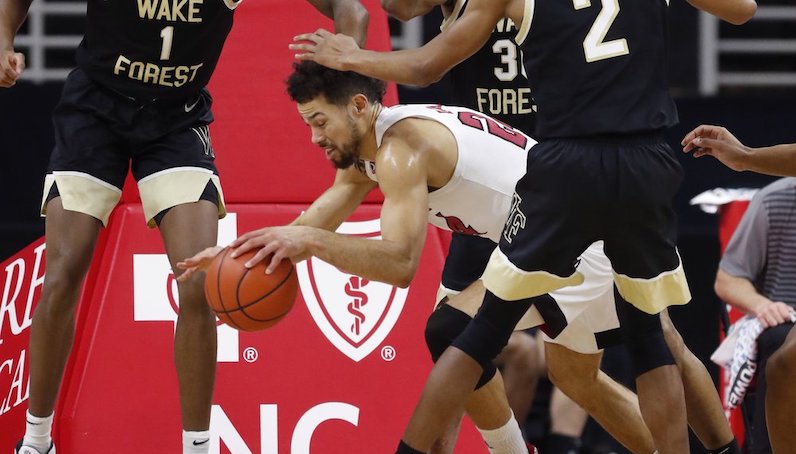 The news may not have come as much of a surprise, but that didn’t make it hurt any less when it broke. On Thursday, NC State announced that veteran combo guard Devon Daniels tore is left ACL in the second half of Wednesday’s win over Wake Forest.

The departure of starting point guard Markell Johnson, following the 2019-20 season, meant a changing of the (point) guard for NC State basketball. One of the premier, high-volume pick-and-roll offenses in the country would need a new creator (or creators) to pull the strings.

Several different players have spent time initiating offense this season for NC State; senior Braxton Beverly has worked as a caretaker, while rookies Cam Hayes and Shakeel Moore have taken turns, too. However, Daniels was Option 1 from the jump this season. It’s why his decision to return for a fifth year of college ball was so crucial to the Wolfpack. And it’s why his absence could prove costly for an NC State team fighting for its postseason life.

Prior to the injury, Daniels was enjoying an All-ACC-caliber season. Daniels played this season with a far greater workload, and more playmaking responsibilities; however, the 6-foot-5 wing balled out and averaged 16.5 points (54.8 FG%), 5.1 rebounds, 3.1 assists and 1.7 steals per game.

As the Wolfpack look to move forward, the team will have to replace more than just numbers; Daniels is this team’s engine. His half-court on-ball creation is the catalyst for an offense that can turn from explosive to rote all too quickly.

More than that, though: after five years of college ball, four of which have taken place in Raleigh, Daniels is mere months away from a professional basketball career that should have him playing for money somewhere around the globe. It would be a serious bummer this injury create any real setbacks for Daniels as he works to achieve any of his basketball dreams.

Before we close the book on the 2020-21 season for Devon Daniels, let’s take a look at just how good he was this season — what he meant to NC State’s offense, and where things go from here.

For the season, Daniels leads the Wolfpack with a usage rate of 25.7 percent (up from 21.6 percent last season); he’s also been on the floor for nearly 82 percent of NC State’s total minutes. Currently, Daniels is one of only three players in the ACC to have played in 80 percent of his team’s minutes with a usage rate of at least 24.5 percent. (Louisville’s Carlik Jones and Prentiss Hubb of Notre Dame are the other two.)

Furthermore, Daniels is one of only six ACC players shooting above 35 percent on 3-point attempts — with 22 percent usage and 15 percent assist rate. The only other ACC guards that hit these benchmarks include Jones, MJ Walker, David Johnson, Jose Alvarado and Michael Devoe.

Of course, plenty of his activity centers around ball-screen usage. According to Synergy Sports, Daniels has scored 0.97 points per pick-and-roll possession (53.8 FG%) this season.

During his redshirt junior season, Daniels turned a corner as an offensive player when he started to put more pressure on the rim. Already a dangerous transition scorer, Daniels attacked the rim with more frequency in the half court.

Wrote about this some this year: Devon Daniels dropped his 3PA rate, but also started getting to the rim way more frequently this season – fewer pull-up long 2s and awkward floaters from the middle of the lane https://t.co/jrXcHG805q

Instead of settling for difficult runners and floaters — from weird angles — Daniels was hellbent on getting to the bucket. As a result, Daniels became a more efficient offensive player, while getting to the line at a higher clip, too.

Those trends continued this season; even with an uptick in usage, Daniels played the most efficient basketball of his career.

The ability to pressure the rim against a set defense — with the help one ball screen — is incredibly valuable. That’s the easiest way to force defensive rotations and create open shots, while avoiding turnovers. This can be a foundational element for an offense.

Daniels, Jones and FSU’s Scottie Barnes are the only three players in the ACC with 24 percent usage, 15 percent assist rate and sub-18 percent turnover rate.

As a driver, Daniels kept defenders off balance with a barrage of quirky shot-making tactics. With his size, shooting touch and handle, Daniels bailed out NC State on plenty of clunk half-court possessions. We should appreciate just how absurd some of his finishing has been the last two seasons.

Or, how about this one: late-clock, reject the ball screen and jump off the wrong foot for another layup?

For the season, over 91 percent of Daniels’ field goals at the rim have been unassisted, according to Bart Torvik’s data. Overall, 52 of Daniels’ 57 2-point field goals this year have come unassisted: 91.2 percent.

The shot creation here is real — from all levels of the floor. Daniels, according to Synergy, has an effective shooting rate of 54.1 percent on off-dribble jump shots, which is No. 1 in the ACC (30+ FGA).

(Oh, by the way, Daniels also has an effective shooting rate of 70 percent on spot-up jumper this season. These are absolutely monster numbers.)

NC State is a high-volume pick-and-roll offense, but Kevin Keatts likes to mix-and-match with pre-screen actions, screen location, player combinations and secondary actions. However, one of the base sets for NC State is this simple 1-4 High look with one of the wings crossing the formation over the top of (or under) two Iverson screens, located at the elbows.

NC State: 1-4 high Iverson cut (one of the Pack's go-to half-court sets), into screen-the-screener side pick-and-roll.

From there, the Pack look to run side pick-and-roll, with a couple different permutations: screen-the-screener, pick-and-pop (Jericole Hellems), roll-replace, among others. Plenty of opponents will look “Ice” these side ball screens and keep the action on one side of the floor.

Occasionally, that will cause a logjam for NC State’s offense. However, if you allow Daniels to have the opportunity, he’ll gladly take the middle of the floor every time it’s offered. Daniels used that space to attack or create for his teammates against a bent defense.

According to Synergy, NC State scored 66 points (fourth most in the ACC) when Daniels passed out of a pick-and-roll to a teammate who finished the possession: 0.89 points per possession.

Those numbers do a decent job telling us a portion of the story; it’s just one data point, though. You really have to watch NC State to know how much secondary offense the Pack received from Daniels’ ability to get a piece of the paint and force help off a live dribble.

According to Pivot Analysis, NC State was +62 in 400 minutes with Daniels on the floor this season. During those minutes, NC State scored 110.8 points per 100 possessions — with a net rating of +9.3.

NC State will continue to run its spread pick-and-roll offense, which means others must step up with Daniels out. Here are the options.

One of the ongoing subplots of NC State’s 2020-21 season has been how to best utilize both Manny Bates and DJ Funderburk, together. Now that Daniels is out, though, that duo becomes even more important. It’s worth kicking the can on the possibility of taking a page out of UNC’s playbook: play big and beat the crap out of teams on the offensive glass.

In theory, Keatts could play those two together more often, try to work through some of the duo’s deficiencies and look to find offense by loading up on the glass. With Bates and Funderburk on the floor together this season, NC State has an offensive rebound rate of 32.8 percent, according to Pivot Analysis. That’s a lot, and could prove to be a new avenue for scoring.

Of course, that strategy may not jibe with NC State’s preferred 4-around-1 spread offense and 1-4 switch schemes on defense. It could also create some rotational concerns by moving Hellems more to the 3, while leaning harder on inexperienced bench depth in the frontcourt — if foul trouble or an injury occurred.

This season, in a smaller sample, the numbers are less friendly. The Wolfpack are -10 in 71 minutes with Bates and Funderburk playing together. NC State has scored under 102 points per 100 possessions in those 71 minutes, too.

To be clear, these are two excellent basketball players. However, it’s just a tough situation when two of a team’s five best players don’t complement one another well. It can make for challenging lineup configurations.

Bates is one of the most impactful defenders in the country. Those talents will earn him a shot to play in the NBA, at some point. He also offers a useful discrete set of skills on offense: set screens and roll to the rim.

Despite his limitations as a shooter, Funderburk is an efficient offense player. He’s shooting 80 percent at the rim this season, while drawing a lot of fouls.

(Quick note: I love when DJ occasionally breaks out that little Euro move.)

Funderburk’s defense is a little more hit-or-miss; he takes bad angles guarding ball screen and isn’t always in good position around the rim as a help defender. But, to be fair, he’s asked to do a lot defensively, including switch 1-4 or 1-5 at times, depending on the matchup or lineups.

Injuries and COVID-19 cost this duo valuable time together on the floor, which could’ve been used to build chemistry or tinker with what works best. It’s not a seamless pair to go with at the same time — specifically on offense. Both guys are non-shooters, though Funderburk is on Year 3 of flirting with a 3-point jumper. At this point, though, it’s probably not happening. These limitations aren’t ideal from a spacing standpoint, obviously.

The lack of any pick-and-pop threat from Bates and Funderburk makes it way easier for opponents to Ice side ball screens and keep NC State’s pick-and-roll offense on one side of the floor. Without Daniels to dribble around and navigate these waters, looks could get worse, too.

This is why Hellems is such a crucial offensive piece for the Wolfpack. As the small-ball 4, he provides shooting and passing the in middle of the floor, which works as a helpful counter against Ice coverages or traps.

Complicating matters, neither Bates nor Funderburk are passers; both are finishers and rebounders. Bates, for whatever it’s worth, shows the occasional passing flash, but at this stage, he’s pretty limited. In 212 minutes of action this season, Funderburk has yet to register a single assist. Funderburk has a lowly 2.5 percent assist rate during his three-year run in Raleigh.

Unfortunately, it’s not possible to augment the spacing issues created by the Funderburk/Bates pairing with savvy big-to-big or big-to-wing passing. Things could really get tricky for an offense that doesn’t have a lot of off-ball movement and needs efficient pick-and-roll play to get north-south. So far this season, NC State is -5 in only seven minutes with Daniels off the floor, while Bates and Funderburk are on together.

How Manny Bates brutalizes opposing offenses at the rim