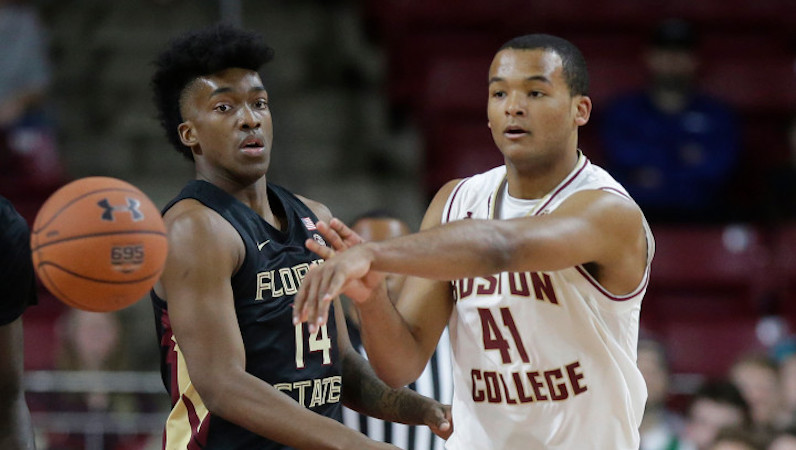 It seems self-evident that Boston College and Jim Christian worked to address several discrete needs via the transfer market this offseason: rebounding and shooting. Urgency is of the essence for Christian, who will return for his seventh season in Chestnut Hill, yet to make an NCAA Tournament. Christian’s overall record with BC sits at 75-119 (.387).

This can explain the additions of guard Rich Kelly (Quinnipiac), and forwards Frederick Scott (Rider) and James Karnik (Lehigh). All three are grad transfers, ready to help in the 2020-21 season.

This is all part of a downward trend. Boston College wasn’t very good during the 2016-17 season (9-23), but the Eagles ranked 10th nationally in defensive rebound rate.

During the 2019-20 season, according to Synergy, Boston College allowed 5.8 points per game on opponent put-back attempts (57.7 FG%), fifth worst in the ACC.

These numbers are far from ideal, especially for a team that ranked 39th nationally in weighted average height, per KenPom, and featured Steffon Mitchell, one of the top two-way rebounders in college hoops. Mitchell, an excellent defender, was one of seven ACC players this season with an offensive rebound rate of 10 percent and a defensive rebound rate of 20 percent.

Scott, on the other hand, averaged 9.0rebounds per 40 minutes over the course of 96 games at DePaul and Rider. With his efforts to space out and look for spot-up 3-pointers (or closeouts to drive), which should pair nicely with Steffon Mitchell, Scott isn’t much of an offensive rebounder. However, he’s solid on the defensive glass, which is more important; during his sophomore and junior seasons, combined, Scott posted a defensive rebound rate of 20.1 percent.

Make it, Take it

Cut to the chase: Boston College ranked No. 296 nationally in 3-point percentage (30.8 3P%) this season. According to Synergy, Boston College scored 0.85 points per spot-up possession (45.1 eFG%), which ranked No. 263 in Division I and 13th among ACC teams, ahead of only Virginia and Pittsburgh.

Over the last two seasons, since Jerome Robinson left for the NBA, Boston College has scored under 0.84 points per spot-up possession (33.4 FG%), combined. That’s less than ideal.

Enter Kelly, who may not be the cure-all but he’s a career 38.7 percent 3-point shooter. During the 2019-20 season, Kelly connected on 39.4 percent of his looks from deep. Kelly also scored 1.09 points per possession (54.4 eFG%) on spot-up no-dribble jumpers this season, per Synergy.

Now a senior, Steffon Mitchell has never been a high-usage player that scores lots of points on a night-to-night basis; he has a career scoring average of just 6.3 points in 31.8 minutes per game. As a junior, Mitchell posted a career-high usage rate of 15.7 percent, which is still quite low.

Earlier in his career, Mitchell looked like he could develop into a stretch-4; however, he went just 1-of-18 on 3-point attempts as a sophomore. This year, Mitchell again flashed some stretch potential — 32.2 percent of his field goal attempts came from beyond the arc. Mitchell shot 30.9 percent on his 3-point looks, too: 17-of-55.

There’s still some room for optimism; Mitchell could turn into a big that shoots in the mid-to-upper 30s on his 3-point attempts, with decent volume. However, even if that doesn’t come, well, he’s still an incredibly useful two-way player.

At 6-foot-8, 220 pounds, with quick hands and feet, Mitchell is a versatile defender, one of the best in the ACC. Along with his strength on the defensive glass, Mitchell averaged 2.7 steals per 40 minutes last season — 1.9 per 40 for his career.

During the 2019-20 season, Mitchell was one of seven players nationally — along with NBA prospects Paul Reed and Tyler Bey — to have 19.5 percent defensive rebound rate, three percent block rate and three percent steal rate.

Going back to the 2007-08 season, only five other ACC players, including Bonzie Colson and Ray Spalding, hit those numbers all in the same season.

While Mitchell has the ability to check 4-5 different positions in college, he’s also a highly competent team defender who can make plays and help efforts in space, too.

Mitchell is a connector on the offensive end, which is incredibly valuable, especially from a frontcourt position. Mitchell can facilitate from the post or elbows, help reverse the ball to different sides of the floor after a pop or slip, or make plays on the short roll. It’s this last trait that really stands out.

With High Point in pick-and-roll recovery mode, Mitchell has an advantage when Jay Heath swings the ball back to him. Mitchell is able to catch and immediately transition to a short roll drive, which draws help defenders. In traffic, with his off hand, Mitchell finds Kamari Williams on the baseline ghost cut. This is really skillful; not every 4/5 can do this.

Mitchell dished out 3.1 assists per game (3.8 per 40 minutes) last season. He was one of only three ACC players, 6-foot-7 or taller, to post an assist rate above 18 percent. (The other two players were Clemson’s funky small-ball 5 Aamir Simms and Landers Nolley of Virginia Tech.)

Thanks to his handle and vision, Mitchell has the ability to grab-and-go and play-make, too: transition pushes that result in efficient offense. As Boston College’s half-court offense has struggled the last two seasons, these efforts from Mitchell were necessary sources of scoring.

With Mitchell and Scott, who can pass some as well (2.1 assists per 40 minutes over the last two seasons), on the floor together, BC can access some intriguing 5-out/4-around-1 lineups. Scott can space out and help open the floor up for Mitchell to create in the middle.

It’s really tempting to visualize that duo in drag screen action, with Scott popping and Mitchell rolling into space. Boston College can establish better half-court spacing on offense without having to sacrifice the defensive glass.

According to Synergy, Scott scored 1.5 points per possession (75 eFG%) on pick-and-pops this season, which ranked No. 3 nationally in efficiency.

In theory, this was was hope for Illinois State transfer Deontae Hawkins. However, after playing in just seven games during the 2017-18 season (right knee), Hawkins turned pro and left the program. BC now has a frontcourt floor-spacer to partner with Mitchell.

Round Out The Roster

Along with Mitchell and the trio of new grad transfers, Boston College has some talented pieces returning — or set to enter the program — too.

Due to a knee injury, promising combo guard Wynston Tabbs missed the entire 2019-20 season. Assuming Tabbs is healthy in 2020, that’s a major boon for the Eagles.

Providence transfer Makai Ashton-Langford, a former top-50 recruit who redshirted this season, is ready to roll. Jay Heath, who averaged 13.1 points per game as a rookie (37.6 3P%), has nice offensive upside.

It’s not hard to visualize an interesting rotation in The Heights: Mitchell, Scott, Tabbs, Heath, Ashton-Langford, Kelly, Langford and Karnik. Add in sophomore forward CJ Felder and BC has some decent depth up front, too. Felder struggled with his shot and turnovers this season, but he’s 6-foot-7 and bouncy: 13 dunks, 2.4 percent block rate.

The 2020-21 season could be Christian’s final stand at Boston College. Things are never easy in the ACC, and the landscape surrounding college basketball (and the world) due to the COVID-19 global pandemic only adds to the existential uncertainty. If and when basketball is played, though, Christian will have pieces and one of his best rosters to work with at BC.

Stock Report: Which ACC teams made out the best in this year’s transfer window?