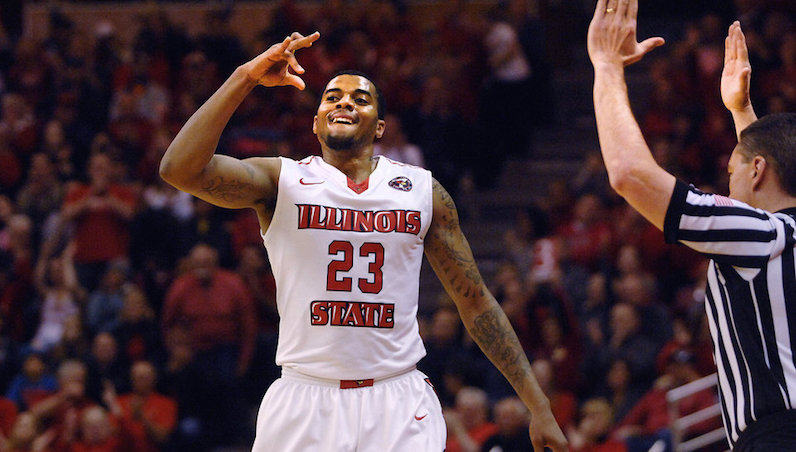 Illinois State forward Deontae Hawkins (23) celebrates after sinking a 3-point shot against UC Irvine during an NCAA college basketball game in the first round of the NIT on Wednesday, March 15, 2017, in Normal, Ill. (David Proeber/The Pantagraph via AP)

After initially electing to transfer to Boston College, Hawkins reneged and reopened his recruitment. National runner-up Gonzaga was in the mix to land Hawkins, too. On Monday, however, Hawkins made it official.

He will be immediately available for BC, which is big news for a program that hasn’t made the NCAA Tournament since 2009. Here’s a look at what Deontae Hawkins brings to the table.

Boston College had all kinds of issues last year. The results weren’t pretty, either: nine wins, 23 losses and the season ended on a 15-game losing slide. Per KenPom, the Eagles ranked outside the top 160 nationally in both offensive and defensive efficiency.

However, it wasn’t all bad. There are some signs for encouragement.

Point guard Ky Bowman is an absolute force on offense; and along with Jerome Robinson, who does a little bit of everything for BC, they form a nifty backcourt for the Eagles.

Hawkins fills a position of need for this team. Boston College had little in terms of returning scoring production along its frontline. Well, they just added a guy that averaged 14 points in a strong conference — the Missouri Valley Conference, which still had Wichita State at the time — and has over 1,000 career points.

Last season, Hawkins was one of only 26 players in Division I basketball to average at least 13 points per game on fewer than 12 field goal attempts while also shooting above 40 percent on three-pointers (min. 150 attempts) and posting a PER above 22.

It feels like Boston College could trot out a pretty nice starting five: Bowman, Robinson, Jordan Chatman, Hawkins (as a stretch-4) and Popovic.

In 2016-17, 36.4 percent of Boston College’s field goal attempts came from beyond the arc; as a team, the Eagles shot 37.4 percent from deep — No. 66 in the nation, per KenPom. Hawkins will only improve this team’s overall shooting and spacing.

According to Synergy Sports, Hawkins shot 45.1 percent on catch-and-shoot opportunities last season — with an effective field goal rate of 65.6 percent, which adjusts for the added value of a three-pointer.

He scored 1.31 points per possession on catch-and-shoots — good for No. 52 in the nation amongst players with at least 100 attempts.

On “unguarded” catch-and-shoots, Hawkins posted a ridiculous effective field goal rate of 96.8 percent, scoring 1.95 points per possession — No. 3 in Division I.

Hawkins should be able to do some serious damage when he partners up with Bowman to run pick-and-pops. Bowman shot 50.8 percent from the field when he was a ball-hander in pick-and-roll action, per Synergy.

Hawkins, on the other hand, shot 44 percent and scored 1.25 points per possession on pick-and-pops for Illinois State. That combination should be incredibly tough for opponents to stop; unless the opposing defense can switch, someone has to be open.

Deontae Hawkins is more than just a shooter, though. He can work on smaller defenders in the post, too.

Hawkins shot 46.7 percent on a high-volume (116 possession) number of post-up attempts. When he was a passer out of a post-up, Illinois State scored 1.76 points per possession, according to Synergy.

This should hopefully help free up Bowman, Chatman and Robinson to bomb from the perimeter.