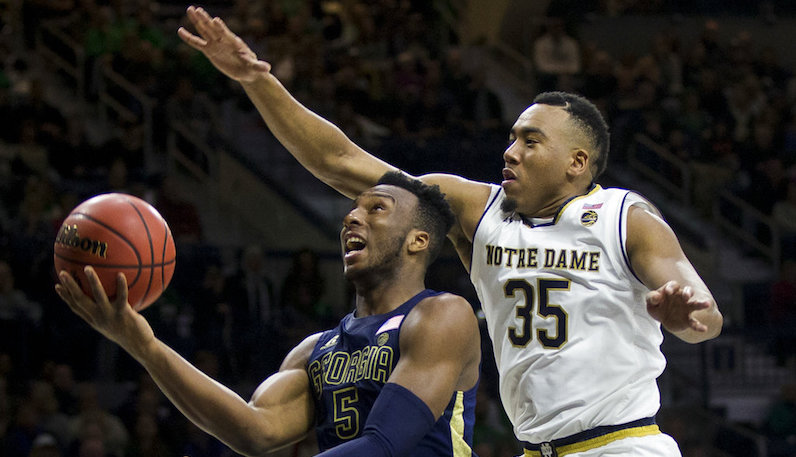 This week Notre Dame basketball was hit with some really disappointing news: All-American power forward Bonzie Colson will miss the next eight weeks, due a a fracture in his left foot. The injury occurred in practice — only a few days after Colson went for 22 and 17 against Georgia Tech.

Bonzie Colson is one of just two players in America currently averaging 20 points and 10 rebounds, per Sports Reference. The only other player also hails from the ACC: Duke’s Marvin Bagley.

But his production and contributions to this program go much deeper than just those really obvious counting statistics. Here’s a look at what Colson brings to this lineup every single game.

What Notre Dame will miss

You will be hard-pressed to find a player with more experience and competitive drive than Bonzie Colson. The 6-foot-6 senior forward has logged nearly 3,000 career minutes across 118 games. He’s been a part of an ACC championship team, played in three different ACC Tournaments in three different cities and a rotation player on two Elite Eight teams.

Colson has seen it all, and he’s clearly the fire that drives Notre Dame.

One of the best scorers in the nation, Colson can get it done in a variety of ways on offense; however, he’s especially skilled around the basket. According to Synergy Sports, Colson scores 1.23 points per possession on post-ups this season (No. 6 in Division I basketball), on 67.6 percent shooting.

Notre Dame has an excellent pick-and-roll offense; Colson obviously plays a serious part in that, too. He partners with his roommate, Matt Farrell, to form one of the best pick-and-roll partnerships in America.

As a roll man this season, Colson has shot 56 percent and scored 1.29 points per possession (No. 4 in the ACC), per Synergy. Farrell, who shoots 46.6 percent out of the pick-and-roll, will need to raise his level of play without Colson soaking up defensive attention. The degree of difficulty in his shot-making will likely increase.

Gravity: An unnatural phenomenon in basketball

Notre Dame is one of the best spot-up offenses in college hoops; according to Synergy, the Irish score 1.15 points per possession — No. 10 in the nation, No. 2 in the ACC.

Matt Farrell and Temple Gibbs are the team’s top two perimeter shooting options. On spot-up attempts, Notre Dame’s starting backcourt has combined to shoot 49.4 percent (44-of-89) and score 1.35 points per possession, according to Synergy.

Now, Farrell and Gibbs are really good players. However, it’s important to remember the gravity that Bonzie Colson possesses. Those post-ups, cuts and rim runs draw defensive attention away from shooters on the wings. It will be a challenge for Notre Dame to remain as hyper-efficient without Colson’s gravity.

Part of Bonzie Colson’s effectiveness derives from his simple refusal to turn the ball over. Colson is one of only nine players in the nation (minimum 200 minutes played) with a usage rate over 30 percent and a turnover rate under 10 percent. That’s an incredible combination.

Piecing this thing together

While Notre Dame has one of the more egalitarian offenses in college basketball. The same concept, however, doesn’t exactly apply to the team’s rotation. Mike Brey prefers a tight rotation that would make Mike D’Antoni proud.

Bonzie Colson has played 470 minutes across 14 games so far this season — nearly 84 percent of Notre Dame’s available minutes. He’s also one of four players averaging over 32 minutes of action per game.

This will likely require more minutes for D.J. Harvey as a small-ball 4, and increased time for Martinas Geben, John Mooney, Elijah Burns and Austin Torres.

Inside The Playbook: Mike Brey proves that not all heroes wear capes