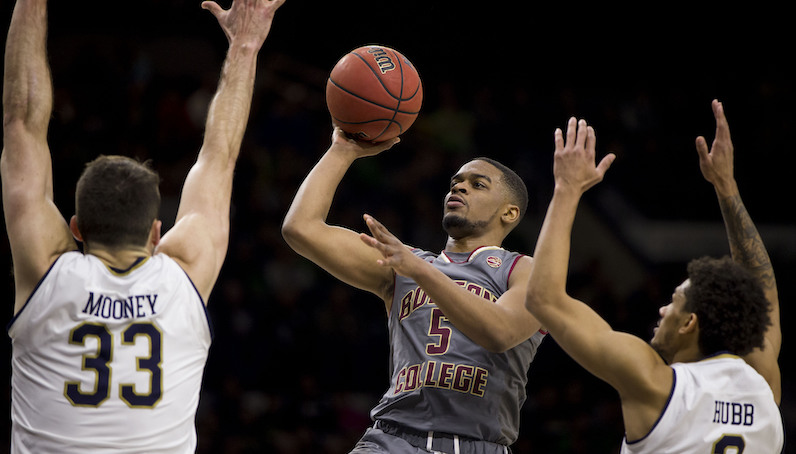 Boston College's Wynston Tabbs (5) goes up for a shot between Notre Dame's John Mooney (33) and Prentiss Hubb (3) during the first half of an NCAA college basketball game Saturday, Jan. 12, 2019, in South Bend, Ind. (AP Photo/Robert Franklin)

About three weeks after Boston College’s 2018-19 season concluded, junior guard Ky Bowman declared for the 2019 NBA Draft. The decision was the opposite of a surprise; Bowman of course tried his hand at testing the NBA waters a year prior, too. After electing to return for his junior season, Bowman put up huge usage numbers — 26.4 percent usage rate, 16 FGA and 5.1 FTA per 40 minutes. While his efficiency lacked (48.6 eFG%), as opponents loaded up their coverages against Bowman, the 6-foot-1 guard came to the combine this year better prepared.

The departure of Bowman, though, brings about a bit of a culture change for Boston College Basketball. Yes, head coach Jim Christian will return for his sixth season at the program; however, for the last four years BC has been led by a pair of North Carolina guards: Bowman and Jerome Robinson. That time period, which included a 19-win season and a top-50 offense in 2017-18, is now over, though.

Change is on the horizon for the Eagles, and for that to go as smoothly as possible, big things will be expected of sophomore guard Wynston Tabbs.

Early on in his freshman season, Wynston Tabbs was a quick hit for Boston College. The 6-foot-3 guard started right out the jump, and averaged 13.9 points, 3.9 rebounds and 2.7 assists per game. While Tabbs struggled at times with his shot (49.4 eFG%), he was lights out from the free throw line (82.5 FT%), which led to a solid true shooting rate of 54.7 percent.

However, about two weeks after he was named ACC Rookie of the Week in mid-December, Tabbs suffered a knee injury in a surprising loss to Hartford. Tabbs returned to play in three conference games, but he was shut down for the season in late January.

Without Tabbs to alleviate some of the play-making duties from Bowman, opponents could blitz and trap BC’s star guard. In return, his pick-and-roll efficiency remained flat, after dropping off following his freshman season.

The Eagles were 10-5 in the 15 games that Tabbs played in, which included a home win over an excellent Florida State squad — one of Bowman’s best games of the season. In the 16 games without Tabbs, BC went 4-12, of course much of that came against stiff ACC competition. Over the final 10 games of the season, Boston College posted a lowly adjusted offensive efficiency of 103.6, according to Bart Torvik.

When Tabbs worked as a secondary creator — 19.3 percent assist rate — it allowed Bowman to get off the ball, too. This was a luxury BC lost when Tabbs went down; Bowman had to play huge minutes (40.1 minutes per game in ACC games), and register fewer spot-up opportunities.

As opposed to running straight 1-5 pick-and-roll with Bowman and Nik Popovic, BC would try to bring Bowman of floppy actions or down screens, and use that to get him into screen-roll actions. However, that’s requires a lot of effort/running for a guy that’s already dealing with a crazy workload. Plus, teams can still trap those types of actions.

Boston College would also let Bowman isolate, but it’s tough to generate reliable offense when matched with the friskiest defenders the ACC has to offer.

Safe to say, those isolation looks are nowhere close to as easy as chilling in the corner, waiting to snipe on the second side of the play.

Through the first 15 games of his college career, Tabbs proved to be a solid transition player, and a good spot-up asset in the half-court offense. According to Synergy Sports, Tabbs (3 dunks) shot 54.3 percent and scored 1.12 points per possession in transition, which ranked 17th in the ACC (minimum 50 possessions).

Tabbs got up 3.7 3-point attempts per game (4.8 3PA per 40 minutes), which is a healthy number, though he shot just 32.1 percent from deep. When he was able to shoot off the catch, though, Tabbs was pretty darn good: 1.18 points per possession (58.8 eFG%) on catch-and-shoots in the half court, per Synergy.

It may be more of a challenge to generate some of those looks without the play-making gravity of Bowman; however, Tabbs did also post an effective shooting rate of 43.1 percent on off-dribble jump shots.

Next Season: What’s Ahead in The Heights?

Along with the return of Wynston Tabbs, Boston College will add at least one more playmaker to its roster this offseason. The Eagles welcome a four-man 2019 recruiting class, which ranks No. 61 nationally, per 247 Sports. Included in that bunch is 3-star combo guard Jay Heath — who hails from Washington D.C.

BC landed Heath over a host of other prominent programs: Georgetown, Kansas State and VCU. Obviously, it’s a bear to play as a point guard in the ACC. However, Christian and the Eagles may need Heath to produce. It would be a significant boon if Heath can work in concert with Tabbs.

Leaky Black, Jay Huff looks to emerge as some of the ACC’s top prospects in 2020