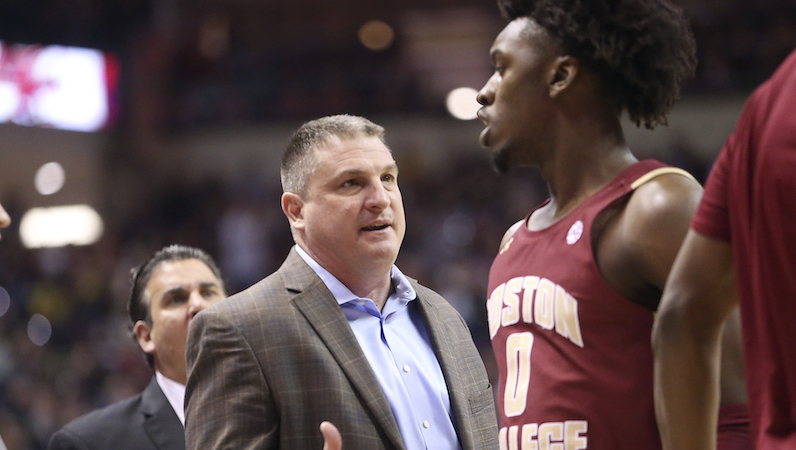 Jim Christian will be back in The Heights for a seventh season; according to tweet from Jon Rothstein, Boston College plans to return Christian as its head coach.

With Christian as their head coach, the Eagles have posted just one winning season. Christian’s overall record with BC sits at 75-119 (.387). Christian has never taken the Eagles to the NCAA Tournament; their only postseason appearance with him at the helm included the 2018 NIT.

To his credit, however, Christian has recruited and helped develop a couple NBA guards: Jerome Robinson and Ky Bowman. With those two controlling the offense, Christian’s best squad — 19 wins during the 2017-18 season — finished 52nd nationally in adjusted offensive efficiency, per KenPom.

On only on other occasion have the Eagles posted a top-100 offense under Christian. In the first season sans Bowman, the Eagles finished with the No. 228 offense in the country.

Prior to his arrival at BC, Christian won 69 percent of his games over two seasons at Ohio (2012-14). Christian has also coached at TCU (2008-12) and Kent State (2002-08). Led by defense, Christian turned Kent State into a power in the MAC; however, that same fortune hasn’t followed him to Boston College.

This will likely not be a unique scenario in college hoops, but Boston College AD Martin Jarmond said after the decision that the challenging and uncertain environment surrounding COVID-19 played a role in his decision-making process.

Boston College will keep head coach Jim Christian. BC finished with a losing record for the fifth time in Christian's six seasons. AD Martin Jarmond said, “There is so much uncertainty right now with everything. You need to be steady and you need to have calm in uncertain times.”