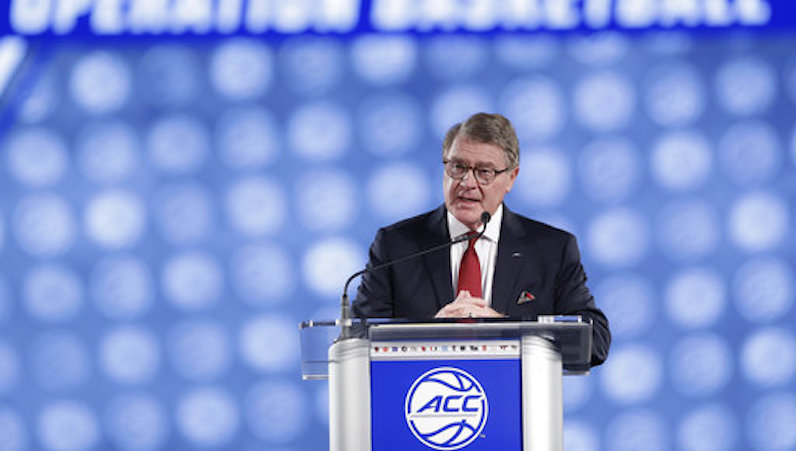 Veteran scribe David Teel, one of the best in the business when it comes to covering college athletics, tweeted out some notes from an hour-long interview conducted with ACC commissioner John Swofford.

Teel and Swofford touched on a variety of subject matter, according to the posts. Of course, the discussion seems focus on the impact of the COVID-19 pandemic as it relates to the ACC. This all started nearly six weeks ago, when the ACC was forced to cancel the final three days of the 2020 ACC Tournament.

As Teel notes, the ACC has no eminent plans to cut salaries or conduct layoffs in the league office. Despite the loss of NCAA Tournament revenue, Swofford informed Teel that distribution to ACC universities will be five percent less than expected.

1. Budgeting handful of scenarios for fiscal 2020-21, but no immediate austerity measures at ACC office. No layoffs, wage cuts, etc.

2. Believes ACC's distributions to member schools for 2019-20 will be about 5% less than projections. That's less than $2M/school.

As America approaches the end of April/start of May, some states are in the process of ending Stay Home orders. North Carolina, which is home to the ACC’s office and four of its member schools, recently had its statewide stay-at-home order extended until May 8.

Things, however, aren’t exactly ramping down. One day after the extension of the order, K-12 schools in North Carolina announced that they will remain closed for the rest of the school year. The state of Virginia, which houses two ACC schools, won’t lift public restrictions until there’s sustained decline over a two-week period with positive tests per day and hospitalizations.

In the college sports world, there’s plenty of worry over how the fall sports season — football, in particular — will be effected.

However, that’s the absolute worst-case scenario; the vast majority of FBS athletic directors believe there will be a football season. Swofford mirrors this belief.

3. "Everything on the table" for start of college football, including delay until early 2021. But can not compromise player safety.

4. Does not rule out games with minimal/no fans.

The shape and form of that remains up in the air, which is why the ACC is looking into a variety of contingencies.