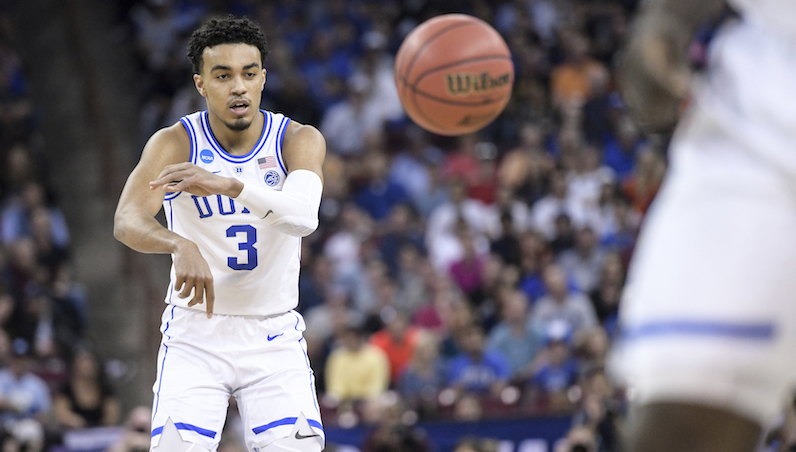 There are several talented guards set to depart the ACC in the 2019 offseason. RJ Barrett and Coby White are likely lottery picks; Nickeil Alexander-Walker will go in the first round of the 2019 NBA Draft, too. After a national title run, Ty Jerome is ready for the next level as well. Of course, Ky Bowman and Tyus Battle have also exited for NBA opportunities. Plus, let’s not forget a veteran like Justin Robinson, who is emerging as an NBA prospect in his own right.

Despite these departures, the ACC will be stacked at the point guard position next season. Two of the top 2020 NBA Draft prospects — Cole Anthony and Tre Jones — will headline the group, but there’s plenty of depth at the position behind them.

With that in mind, let’s take a look at the ACC’s top lead guards heading into next season.

Few, if any, players will enter college basketball next season with more excitement than Cole Anthony. As I wrote recently, UNC has finished with an assist rate of 55 percent or better for eight straight seasons, per KenPom. And over the last 10 seasons, North Carolina has five top-five finishes nationally in terms of average offensive possession length.

The 2018-19 squad averaged a blistering 14.6 seconds per offensive possession, which was good for fifth fastest in the country.

For these numbers to remain high, a lot hinges upon Anthony to deliver. Based on his Nike EYBL performances, to his recent work on the prep all-star game circuit, culminating with a strong outing at the Nike Hoops Summit (25 points, three 3-pointers), it appears as though Anthony is more than up to the task.

Cole Anthony is a great fit for UNC's high-octane offense. Dynamic in transition with an aggressive mentality. Can get to his pull-up at will and has clear 3-level scoring potential. Embraces contact + can guard when engaged. Developing floor game. pic.twitter.com/lm3sto06KX

By this point, everyone knows that UNC wants to push the pace offensively; after seeing Coby White shine in a lead guard role this season, Anthony looks like the next in a long line of great North Carolina guards.

I wrote about this last month, but the return of Tre Jones feels similar to what De’Andre Hunter did a season ago, too. With Jones back, Duke has the league’s top defensive player, and a known commodity on offense.

As a freshman, Jones averaged 9.4 points, 5.3 assists (6.2 per 40 minutes) and 1.9 steals per game. While he handled the ball plenty, Jones often had to move away from it with high-usage teammates, like RJ Barrett and Zion Williamson, controlling the offense. At times, that proved to be a significant issue.

It wasn’t just Central Florida in the NCAA Tournament; down the stretch of ACC play, Virginia Tech and UNC played off Jones and dared him to hit open jumpers, which caused issues for Duke’s half-court offense.

That will change in 2019-20, though. Duke has the nation’s No. 1 recruiting class coming to Durham, but Jones is the unquestioned lead dog of this roster. The ball will reside in the hands of Jones, who has the ability to lift an offense beyond the sum of its parts as its primary initiator.

If Jones can figure out a pull-up 3-pointer in the offseason, look out. However, even if he can’t get that shot down, Jones should still be able to look for his midrange/floater game more as a sophomore. That’s an area of comfort. Jones also shot 57 percent at the rim in the half court, per Synergy.

Jones is a wonderful passer (24 percent assist rate) who sees things from an advanced perspective. He already knows plenty of the dark arts required to play point guard at a high level. Jones is patient and strong; he can maintain a dribble while using his lower body to shield his defender from the ball — right out of the Chris Paul playbook.

Occasionally, Jones will doing something in terms of passing the ball that lets you understand just how quickly he can process the game. He sees passing windows before they open, and he’s capable of playing his teammates into space, like a heady play-making midfielder in soccer. This may be my favorite pass thrown in college basketball during the 2018-19 season.

On defense, well, Jones is special. For my money, there wasn’t a better on-ball defender (2.2 steals per 40 minutes) in college basketball this season. He gets low and slides with amazing precision. Tre Jones isn’t Chris Paul but, man, does he look like Young CP3 on defense at times.

Regardless of how his offense develops, Jones still has NBA potential as a defensive-minded backup point guard.

This season, Jones was one of seven Division I players with a steal rate of three percent, an assist rate of 20 percent and a sub-15 percent turnover rate.

It was a loaded season for freshmen in the ACC. However, even in a year dominated by the stars along Tobacco Road — Zion, RJ, Coby — Pitt’s Xavier Johnson carved out a name for himself, too.

After decommitting  from Nebraska, Xavier Johnson was the second commit Jeff Capel landed when he took over at Pittsburgh last March. Once the season started, it didn’t take long for Johnson to announce his presence as a potential NBA prospect.

The 6-foot-3 guard has a good motor and a quick first step, which allow him to break a defense down off dribble penetration. He averaged 15.5 points per game last season, and ranked 50th nationally in usage rate: 30.3 percent. In ACC play, Johnson’s usage rate climbed to 31.4 percent — second highest in the conference.

Johnson still got up over three 3-point attempts per game (35.2 3P%) last season; however, a much larger percentage of his offense came at the basket.

Xavier Johnson making a statement early in this game… pic.twitter.com/xoJyCRnE1c

Over 48 percent of Johnson’s field goal attempts (185 of 383 FGA) occurred at the rim. That’s a huge number. And while he shot just 52 percent on said looks, only 5.2 percent of his field goals from this range were assisted.

Johnson plays with vision, too. He handed out 4.5 assists per game — 5.8 per 40 minutes. According to Bart Torvik, he was the only freshman in the country with a 30 percent usage rate and a 30 percent assist rate.

As talented as Johnson is, he turned the ball over too many times this season: 24.2 percent turnover rate. Of course, part of that equation is an offense that offered but so much relief for the ball-dominant Johnson. Opponents could make life difficult for Johnson by trapping ball screens or sending extra help defenders.

The progression of Trey McGowens and Au’Diese Toney could go a long way to help ease defensive pressure on Johnson.

Forrest returns to Tallahassee for his fourth and final season as one of the most physically-imposing guards in America. A downhill driver of the basketball, Forrest really stands out on the other end of the floor, though; he’s a dogged defender who can check multiple positions and disrupt.

As a junior, Forrest bagged 69 steals, which ranked second in the ACC — behind only Zion Williamson (70); for his career, Forrest has averaged 2.6 steals per 40 minutes, which is a big number.

(Let’s not forget: the last time we saw Forrest he put together a monster effort in defeat against Gonzaga in the Sweet 16.)

The jump shot is still a missing piece for Forrest (career 47.3 eFG%), though. Last October at ACC media days, Forrest told me he wasn’t too worried about his jumper entering his junior season; his focus was on all other aspects of his game.

However, after shooting just 16 percent on pull-up jump shot attempts in the half court as a junior, per Synergy, this is an area to address in the offseason.

While his shot remains a liability, Forrest still finds offense with powerful drives to the rim; he’s an absolute force at times. That physical driving nature can cause turnovers (2.7 turnovers per 40 minutes for his career); however, it also makes him a strong slash-and-kick player.

During the 2018-19 basketball season, eight ACC players finished with steal rates of three percent and assist rates of 20 percent. Of that group, only three return: Tre Jones, Jose Alvarado and Trent Forrest.

Over the the last two seasons, Forrest has averaged 3.9 assists per game — 5.6 per 40 minutes. In 2019-20, FSU will rely heavily on Forrest to be an offensive engine; look for he and fast-rising 3-and-D wing Devin Vassell (69 eFG% on catch-and-shoots) to drive this ship.

At times in the 2018-19 season, it felt as though the weight of the Miami Basketball universe was all on the shoulders of Chris Lykes. With a limited, seven-man rotation, Miami was dealt a tough hand. Lacking in depth and plus scoring talent, the Hurricanes took plenty of bumps and bruises during a rough and tumble ACC season.

Miami went just 5-13 in ACC play; over those 18 games, the Canes ranked 14th in adjusted defensive efficiency, per KenPom. Offensively, though, Miami was closer to the middle of the road in adjusted offensive efficiency: 1.01 points per possession, good for eighth in the ACC. Whatever good Miami found on offense can be traced back to Lykes.

Despite the attention, Lykes still proved to be a powerful pick-and-roll scorer. Over 31 percent of Lykes’ possessions were used via pick-and-roll, per Synergy: 0.91 points per possession (52.3 eFG%), which ranked third in the ACC (minimum 100 possessions).

Lykes was one of five players in the ACC this season to average 16 points, three assists and four free throw attempts per game. According to Synergy, Lykes shot 40.7 percent on off-dribble jump shots in the half court — scoring 1.01 points per possession (50.4 eFG%), which ranked No. 25 in Division I.

Honestly, the 5-foot-7 measurement given to Lykes may be a tad generous, too. Lykes is a smart player, though, and he knows how to use his low center of gravity to his advantage — weaving around defenders with craft and misdirection.

From one of Miami’s go-to actions (the double drag screen), watch Lykes work against a loaded up Virginia Tech defense. He looks like a sports car zipping around a bunch of oversized orange traffic cones.

Markell Johnson: To be determined

After a strong junior season, Markell Johnson opted to test the 2019 NBA Draft waters. This is a wise choice; there’s no risk in getting some valuable feedback from NBA teams. Unlike other notable underclassmen without a first-round guarantee — Battle and Bowman, for instance — Johnson has left the door open to return to Raleigh.

If Johnson comes back, he will absolutely be one of the best players in the ACC. At this point, Johnson is mostly a fringe NBA prospect, although I’m a little more bullish than most. I think he can play professionally.

Who was the only ACC player to rank top 5 in the league in both isolation and catch-and-shoot efficiency this season? That would be Markell Johnson of @PackMensBball — more on the point guard's breakout junior season https://t.co/KSBidOgQq8 pic.twitter.com/oIBc9nMOvN

For more on Johnson: Last month, I wrote a big piece of his development as a pick-and-roll decision-maker and scorer.

Other Names to Remember