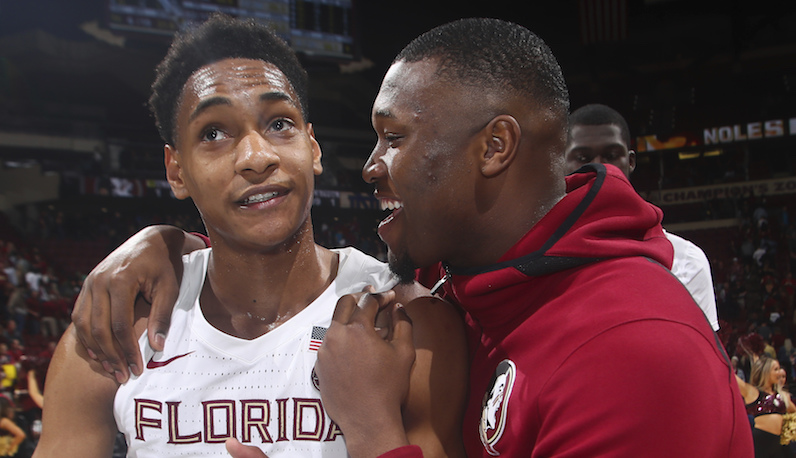 Lots to get to, so let’s get going. First up: Big Monday Basketball results.

Back on its home floor, Florida State responded to Saturday’s loss at UNC with a come-from-behind-late win over Notre Dame, 68-61. This wasn’t the cleanest game for FSU, which turned the ball over 14 times (21.5 percent turnover rate), many of the live-ball variety, and made just six 3-pointers.

Florida State made several key plays down the stretch and hit some clutch free throws — outscoring Notre Dame by 12 points over the final 10 minutes. The Seminoles also continue to get nice production from freshman Devin Vassell.

Watch it: Devin Vassell talks after leading #FSU in points (13) and rebounds (6) in the comeback victory over Notre Damehttps://t.co/POi4Sa3fV8

FSU (10-5 ACC, in contention for a fourth place finish) is now off until Saturday when NC State comes to town. Notre Dame (3-12, on the other hand, has now lost four games in a row — all by eight or fewer points.

#UNC can lock up a double-bye in the ACC Tournament with a win over Syracuse on Tuesday. Game preview: https://t.co/Dbv0tM1f7p

The ACC handed out its weekly honors on Monday and Tobacco Road claimed both. After notching two double-doubles in victories over top-25 teams, Luke Maye was again named ACC Player of the Week. RJ Barrett played all 80 possible minutes in Duke’s two games last week; over those two outings, he averaged, 31.5 points (59.5 FG%, 5.5 FTA), nine rebounds and 5.5 assists. For his efforts, Barrett was again named ACC Rookie of the Week.

NC State football landed its third 2020 commitment: in-state defensive tackle Jaylen Smith, a 3-star prospect and one of the top 25 players in the the state of North Carolina. Smith had one another FBS offer: Wake Forest.

Jaylen Smith excited about being part of Wolfpack Nation https://t.co/ojUioE2RCB.