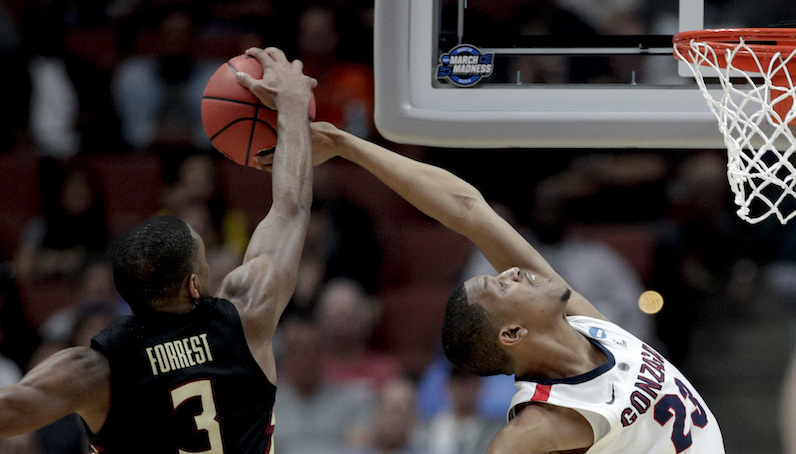 It’s been an emotional week for Florida State with the death of Phil Cofer’s father. His teammates, playing without him but also for him, tried to pull-off a significant upset in Anaheim; however, the Gonzaga Bulldogs refused to budge. The winningest season in Florida State history (29-8) ends with a 72-58 defeat to Mark Few and Gonzaga.

Hell of a year. Bit of a rebuild next year, but will be fun

FSU trailed for almost all of the game with Gonzaga’s offense unleashing a balanced attack. In the first half, though, the Bulldogs were led by the two-way impact of future lottery pick Brandon Clarke. The 6-foot-8 jumping jack was up to his old tricks — flying through the air, protecting the rim with his excellent vertical play. Clarke finished with 15 points, 12 rebounds and three blocks. (The block number doesn’t do his performance justice, though; he contested and altered numerous close looks by FSU.)

The normally deep Florida State didn’t have Cofer or grad transfer point guard David Nichols. After a tough first half of half-court offense, FSU get it going over the final 20 minutes.

This was Trent Forrest’s game, though. One of the most powerful guards in America had a monster game: a game-high 20 points (8-of-11 FGA), five rebounds, four assists, three steals and a block.

Despite a valiant effort from Trent Forrest — 20 points, 5 rebounds, 3 steals — @FSUHoops falls to @ZagMBB in the Sweet 16, 72-58. Forrest having to come out of the game around the 4-minute mark proved critical #MarchMadness

As Florida State mounted a comeback in the second half, Forrest lead the way — making hustle play after hustle play. On offense, he was fearless, attacking Clarke at the rim and finding some success, to.

Florida State’s two other stars, Terance Mann and Mfiondu Kabengele, had off nights in terms of offense. Mann shot just 1-of-8 from the floor and scored five points; he did, however, manage to disrupt Gonzaga’s Josh Perkins at times.

Kabengele hauled in seven rebounds, including two on the offensive end. It felt like he had his hands on numerous other rebound opportunities, but everything was just out of reach — the story of the night. Starting center Christ Koumadje finished with eight points on 4-of-4 shooting, but foul trouble plagued him for most of the night.

Florida State will obviously lose an impactful group of seniors, including Mann, Cofer and Koumadje. However, there should be plenty returning to Tallahassee for the 2019-20 season, too.

What a ride. We’ll be back. Thank you for the support all season long. pic.twitter.com/jPqDAqunFk

A look at the improved 3-point shooting of Terance Mann