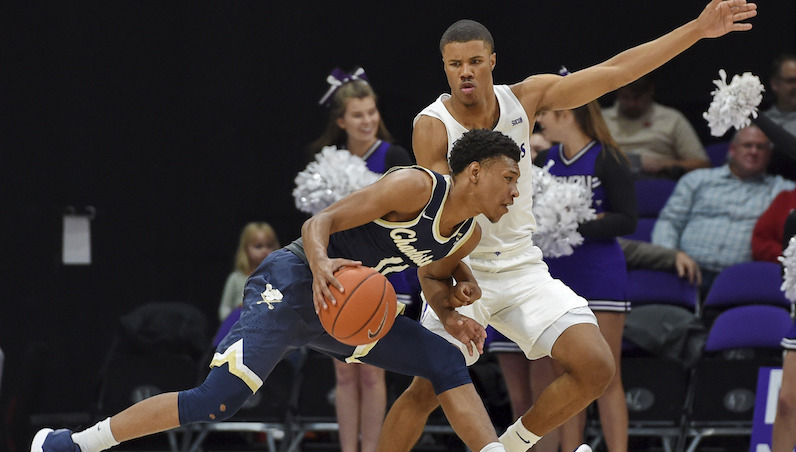 With the departures of Coby White, Kenny Williams and Seventh Woods, UNC has a good bit of turnover in its backcourt. Over the course of seven days, though, Roy Williams and North Carolina landed several key additions.

Anthony, who projects as a top-10 NBA Draft pick, will be the primary ball handler in North Carolina’s go-go offense. Harris is a top-70 prospect in the 2019 class; previously a Virginia Tech commit, one can usually expect solid two-way production out of wings that Buzz Williams targets.

However, it will also be helpful to add a guard that’s logged nearly 100 games of college basketball experience to his credit. With over 3,000 minutes at the collegiate level to his name, this is exactly what Christian Keeling brings to the table in Chapel Hill.

Before we hit the offseason, let’s learn a little bit more about the newest addition to North Carolina’s roster.

Another note on #UNC grad transfer Christian Keeling is his consistency of scoring over three seasons at Charleston Southern.

This season Keeling shot 38 percent on 3-point attempts — with over 46 percent on his field goal attempts (6.3 3PA per game) coming from beyond the arc. He frequently played with the ball in his hands and attacked off screen-roll action. According to Synergy Sports, Keeling scored 1.02 points per possession (59.6 eFG) out of the pick-and-roll.

Here he is hitting a pull-up 3-ball out of the pick-and-roll against Clemson last December. John Newman goes under the screen and Elijah Thomas drops, which gives Keeling an open walk-up look from deep.

In the 2018-19 season, nearly 40 percent of Keeling’s makes from deep came unassisted, too. Keeling clearly has some strong shot-creation abilities, including a pretty quick release. In this clip, he quickly rhythms up into another triple over the arms of the outstretched 6-foot-8 Hunter Tyson.

When UNC and Clemson play one another next season, the Tigers will certainly be ready for Keeling. Clemson won big over Charleston Southern last season, but in that game Keeling scored 25 points on 14 field goal attempts (5-of-6 3PA), including several deep pull-up 3-pointers.

According to Synergy, Keeling shot 39.1 percent on off-dribble jump shots in the half court (43-of-110 FGA) this season. His effective shooting clip of 50.5 percent on these looks was a top-25 number nationally, too (minimum 100 FGA).

All of that is really great; however, North Carolina will need Keeling to focus on his spot-up jumper when he gets to Chapel Hill. That should be the priority. The 2019 senior class featured one truly exceptional spot-up weapon (Cameron Johnson) and two solid catch-and-shoot players: Kenny Williams and Luke Maye. Let’s not forget: Coby White was an excellent spot-up player, too. That’s all gone now.

To help keep the floor spaced and the offense running efficiently, Keeling needs to continue to hit from downtown. (After a strong junior season shooting the ball, Brandon Robinson looks ready to pick up some of the slack here, too.)

For his career, Keeling shot 34.8 percent on half-court catch-and-shoot looks (230 FGA), per Synergy. As a junior, though, that number jumped to 38 percent — with an effective shooting clip of 56.5 percent, which is strong.

The addition of Anthony to next season’s roster gives North Carolina an obvious person to pass the play-making baton to: from one 5-star guard (White) to another. White was a supernova this season for UNC — a shot-making savant who could get downhill and set his teammates up, too.

However, on the rare occurrence when White struggled or played loose with the ball, North Carolina’s offense could slump; the team lacked a true secondary creator. Cameron Johnson was a tremendous offensive weapon, but he couldn’t break a defense down with dribble penetration.

Two seasons ago, Theo Pinson held down that play-making position — of course, with serious contributions from Joel Berry. Nowadays, basketball teams — regardless of competition level — want multiple playmakers on the floor. This is how offenses bend and move defenses; the idea is to create advantage and find gaps to attack. These are the alleys teams utilize to generate efficient looks: shots at the rim and kick-outs for 3-pointers.

I have to think this role — operating as a secondary creator — is part of the reason Keeling picked UNC. At two of the other programs that recruited him — Clemson and Georgia Tech — Keeling would’ve had a larger role, and spent more time on the ball. Playing next to Anthony in some lineups will allow Keeling to attack off the catch — as opposed to generating offense from a high ball screens.

This is also where his efficiency from off the catch factors in, too. If Keeling has the ability to force hard closeouts, the floor should open up for him to attack.

North Carolina has now finished eight straight seasons with a team assist rate of 55 percent or better; according to KenPom, the Heels ranked 14th nationally this season with an assist rate of 60.6 percent. With Pinson as the offensive engine in the 2017-18 season, UNC posted an assist rate of 61 percent, another top-15 number and its highest since the 2005-06 season.

For these numbers to remain high, Anthony will have to shine; however, it will be up to secondary options like Keeling to provide support, too.

Behind Anthony, UNC will need someone to handle to backup point guard minutes. Keeling could certainly factor into this mix, as will incoming 3-star guard Jeremiah Francis. No matter what, Leaky Black will play a major role, which could include more ball handling when Anthony sits.

It’s cliched to mention this, but if you’re going to play serious minutes for Roy Williams, you better be able to defend. This shouldn’t be an issue with Keeling.

Go through enough Keeling tape, and you’ll find a defender that takes some gambles and overcommits in passing lanes, which leaves him susceptible to backdoor cuts.

However, he plays hard on that end of the floor, and with some refinement he should prove to be another fine defensive cog for the Tar Heels. UNC must replace the defensive presence of Kenny Williams, who emerged as the team’s perimeter stopper the last two-three seasons. Again, this is where Black (2.4 steals per 40 minutes) has an opportunity to shine.

Keeling provides some interesting defense upside, too. For a 6-foot-4 player, he grabs a ton of defensive rebounds (8.6 total rebounds per 40 minutes) and blocks more than a few shots. According to Bart Torvik’s site, Keeling was one of 33 Division I players 6-foot-8 and under to post a defensive rebound rate of 20 percent, a block rate of two percent and a steal rate of two percent.

North Carolina rarely goes the graduate transfer route, but clearly, the staff had an opportunity to improve the roster and add some much-needed experience. From that perspective, Keeling looks like a solid add for the Tar Heels.

Seventh Woods to transfer out of North Carolina after 3 seasons