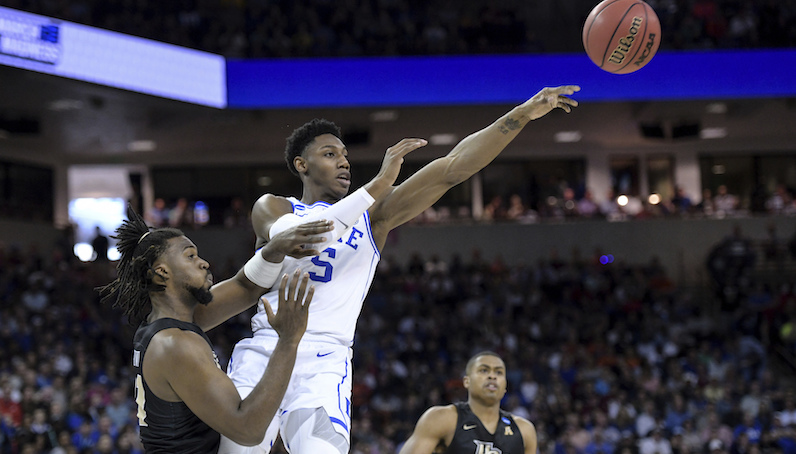 As the ACC advances five men’s basketball teams to the 2019 Sweet 16, it knows that at least one will push through to the Elite Eight. That’s because two of those teams — Duke and Virginia Tech — will meet in third round play.

Before the Hokies and Blue Devils tip-off on Friday in Washington D.C., though, let’s take a look back at what happened when these two teams meet prior — just four weeks ago, in what seems like a world away.

We know Duke’s Zion Williamson is fond of quoting Jay-Z; so why not reference another classic Hov track to take quick inventory of what’s changed since the Feb. 26 meeting — for both teams?

At the time, both programs were dealing with significant absences. Duke’s loss at Virginia Tech came just one week after Williamson’s shoe erupted and the entire sports media landscape lost its collective mind. This was Duke’s second full game since the injury — only a few days after the emotional Saturday night win at Syracuse.

On the flip side, Virginia Tech was a man down, too. And while it’s comical to compare any other college player to the impact of Zion, Justin Robinson is a really freaking good player — and critical to Tech hitting its own lofty ceiling.

By the end of February, the Hokies were going on a full month of life without Robinson. While there was a learning curve — back-to-back losses to Louisville and Clemson — Tech rebuilt its offense on the fly. Everything now ran through Nickeil Alexander-Walker or Kerry Blackshear Jr.; the Hokies used the pinch post, nail and foul-line extended areas of the floor as hubs for offense.

Throw the ball to NAW or Blackshear at one of those entry points and run offense off it — split action, cuts, handoffs and more. For the most part, Tech found success.

With Zion and Robinson back in the mix, things will obviously look different for the rematch. However, it’s still worth returning to Tech’s win over Duke to see if there’s anything we can pull from it before Friday’s Sweet 16 matchup.

When Zion Williamson was sidelined with his knee injury, Duke’s offense became super-reliant on the talents of RJ Barrett. Get Barrett in the ball in the middle of the floor — usually with a flat ball screen — and let him go to work.

As talented and productive as Barrett is, he can get tunnel vision at times, and also struggle to finish at the rim. (Barrett: 51.8 FG% at the rim in the half court, per Synergy Sports). Barrett’s already high workload shot through the roof without Zion.

This process was complicated, of course, by Duke’s lack of shooting. The Blue Devils rank 329th nationally in 3-point percentage (30.7 3P%); according to Synergy, Duke has scored just 0.82 points per possession (42.7 eFG%) on spot-ups this season. Laugh all you want at this notion, but Williamson (40 3P% since the start of January) is missed here, too.

Those shooting woes and the reliance on Barrett were picked on by the Hokies up in Blacksburg.

During this stretch of games, Barrett wasn’t really able to attack with a spread floor; in fact, most defenses, wisely, rolled their coverages to load up on the Canadian southpaw. Some, however, were more bold in these tactics — like Virginia Tech. Buzz Williams and the Hokies dared anyone else to beat them that night in Blacksburg.

Now, RJ still managed to get to the rim on this possession; however, look where all of the help defenders are located during the drive. Alexander-Walker abandons Jack White — in the midst of his midseason shooting funk — in the weak-side corner; meanwhile, Ty Outlaw sags down to the elbow off the streaky Cam Reddish.

One of the primary defensive tenets against slash-and-kick basketball is to never help off the strong-side corner. Well, watch what Wabissa Bede does here. Bede stunts down, effectively ditching Jones in the corner, to help on Barrett’s drive. Somehow, the slippery Barrett still finds a crease, though. In many cases, this should result in an easy kick-out pass for a catch-and-shoot 3-pointer. (Imagine it’s Gary Trent Jr. in the corner. No way Bede could guard it like that.)

Here’s another look from earlier in the game. On this possession, Javin DeLaurier lifts to set a high ball screen. However, even before he screens, Tech goes from icing the ball screen — dropping Blackshear and having Bede force him defensively to stay on one side of the floor — to straight up trapping Barrett before a screen is even set.

As this is happening, Ahmed Hill sees his man, Jones, exit to the opposite side of the floor, and yet he remains loaded up on Barrett. For chunks of this game, the Hokies ignored Jones in the half court — which is exactly what they against Trevon Duval last season.

In total, five sets of orange and maroon eyes are glued to Barrett as Tech defends the back side 4-on-3.

Again, Barrett works his magic and skirts around the double team before settling in for a midrange finish. This, however, is serious heavy lifting for a shot that’s really not that efficient of a play. Make sure to remember this for Friday.

How to defensively induce a near-nightmare

Duke barely survived a second-round scare against Johnny Dawkins and Central Florida, thanks to the late-game heroics of Williamson, Barrett and Reddish, who had a sneaky good performance (13 points, 3-of-4 3PA) against the Knights.

Dawkins and UCF junked up Duke’s offense by dipping into something that the Golden State Warriors famously deployed during their first title run: matching up its rim protector on an opponent’s weak perimeter shooter.

The matchup wasn’t designed for Fall to chase Jones around the perimeter; instead, he was instructed to plant himself at the hoop, play centerfield on any drive and dare Jones (1-of-8 3PA vs. UCF) to shoot from deep. (Jordan Goldwire received largely the same treatment when he was in the game, too.)

UCF coach (and Duke legend) Johnny Dawkins put 7’6” Tako Fall on Duke’s point guard Tre Jones and told him not to guard Jones and just dare him to shoot. It worked because Jones put up a couple bricks. pic.twitter.com/isqKPCPh11

Central Florida’s wings chased Reddish and Barrett around the perimeter while the 6-foot-11 Collin Smith matched up with Williamson. Smith, however, also sagged far off Zion in an effort to cutdown on drive lanes. When he has space, Williamson is a pretty good 3-point shooter; however, that’s preferable to him blowing by defenders to continue his historical dominance at the rim.

According to Synergy, Barrett and Williamson combined to go 6-of-15 (40 FG%) on attempts around the basket in the second half, including runners and floaters — some of which came with Fall on the bench. (For the game, Duke attempted just 12 free throws, too.)

And that right that there is exactly how you weaken Duke. That’s low volume and low efficiency in the paint for the Blue Devils.

In order to offset the 3-point shooting inefficiencies, the Blue Devils need efficient power at the rim — both in the half court and on the break. If you limit turnovers (UCF finished with 11) and find a way to make life a challenge at the hoop — far more easily said than done — then this Duke team becomes mortal.

There are also ways Duke can counter this defense, which was saw some of against UCF. Jones can turn into a dangerous screener or handoff weapon in the half court. With his defender nowhere near him, Jones can screen for Barrett or Williamson, and those guys can shoot in space or gather up some steam to attack off the dribble.

Would VT try it again?

This approach the Central Florida utilized is a step further than the Hokies went last month at Cassell Coliseum. Earlier in the second half, the Knights used some defenses that looked similar to Virginia Tech’s strategy last month — look how far Terrell Allen plays off of Jones here.

Basketball is both a make-or-miss and a copycat sport. (I apologize sincerely for the cliches.) At least in theory, the more Duke’s half-court offense can be lured into shooting from deep — while cutting down on Zion’s rim looks — the better for opponents. (For whatever its worth, Duke did make 10 3-pointers on 40 percent shooting from deep. It’s not like they didn’t knock down some good looks.)

I’m sure Buzz Williams and VT will try whatever it takes to curtail Zion and Barrett. If there’s ever a time to increase one’s risk profile, it’s now. A team like Tech is in the Sweet 16 for just the second time in program history — four wins away from a national title.

This team will lose several star players after this season; Williams could even be out the door, too. If there’s ever a time to go for it, it’s right now. So you better believe that this team will try whatever it can cook up to throw at Duke’s lottery picks.

Of course, Virginia Tech doesn’t have quite the same personnel as Central Florida. The 6-foot-10 Blackshear isn’t the same level of rim protector as Fall: 3.9 percent block rate. Behind him, there isn’t much else in terms of size.

UCF is one of the ten tallest teams in the nation; the Hokies rank outside the top 140, per KenPom’s weighted metric. (Central Florida also doesn’t have a wing defender like Alexander-Walker, who should play a major role this week.)

Duke still managed to score over 1.1 points per possession in the last matchup, and that was without Williamson. Furthermore, Tech’s forwards — Ty Outlaw, Isaiah Wilkins — are big but simply don’t have the strength to match Zion one-on-one. This will require multiple defenders and a team effort. For that to happen, Virginia Tech must ditch convention if it wants to pull off an upset.

Stay Tuned: Back with More on Duke-Virginia Tech

Later on, we’ll return with a look at how Duke defended Nickeil Alexander-Walker up in Blacksburg, and what may be different now that Justin Robinson is back for the Hokies.

One Grand Experiment: David Glenn on the freshmen-led Blue Devils of Coach K