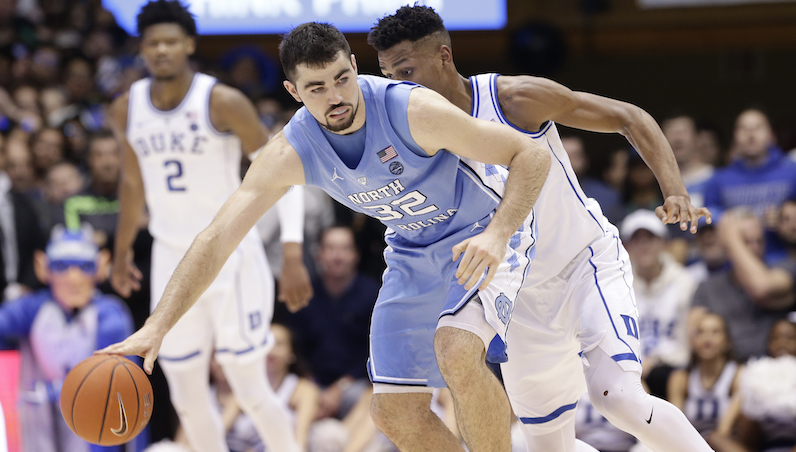 So, yeah. This was a weird week for ACC basketball, huh? Let’s see if we can turn the page and get ready for the weekend lineup. Conference play is dwindling, Charlotte is on the horizon, which means Selection Sunday is, too. Before that, here’s a look at the nine ACC men’s basketball teams projected to make the NCAA Tournament — and one number to know for each.

The efficiency of Virginia’s offense (No. 4 nationally) is the byproduct of a collective effort; all pieces need to move together to work in harmony. However, it doesn’t take a genius to figure out who drives that flow: De’Andre Hunter, Ty Jerome and Kyle Guy.

Only four players in Virginia’s rotation have usage rates above 20 percent — the big three, and Jay Huff off the bench, who plays far fewer minutes and is brought in to provide scoring. With that that in mind, I’d like to highlight one of this unit’s less-glamorous impact players: Braxton Key.

Key, who has an outside case for ACC Sixth Man of the Year (the award belongs to FSU’s Mfiondu Kabengele), is one of the country’s most important bench contributors. He’s also an excellent defender. The Alabama transfer does a lot for UVA, including positional flexibility; with Dre Hunter and Key, Tony Bennett has two swing pieces that provide size, defense and athleticism.

Hunter is this team’s ace defender, but Key has proven to be both versatile and impactful. He ranks third in the ACC in defensive box plus/minus (7.9) and fourth in defensive rebound rate: 23.3 percent, which is a monster number. Key averages nearly 11 total rebounds per 40 minutes.

He’s also a really useful player in terms of stocks (steal and blocks). Key is one of four ACC rotation players with a steal rate of 3+ percent and a block rate of 3+ percent — along with Zion Williamson, Marek Dolezaj and Javin DeLaurier. The 6-foot-8 forward averages 1.9 steals and 1.1 blocs per 40 minutes.

On offense, Key’s shot has ebbed and flowed (28.3 3P%, 3.3 3PA per 40 minutes). The junior forward has an effective shooting rate of 48.5 percent, which isn’t great but is also a career best. In ACC play, Key’s 3-point percentage has dropped under 27 percent, but he hit two big ones in the win over Virginia Tech.

Outside of the shot, Key finds other ways to contribute offensively — setting screens and moving without the ball (61.1 FG% on cuts, per Synergy). He’s there to keep things humming and avoid mistakes (1.4 turnovers per 40 minutes). However, Key can put the ball on the deck and make a play, too.

For Virginia to make that deserving Final Four push, Key must continue to add value off the bench for a team that functions with a tighter rotation.

Even though he won’t take to the floor on Saturday at Syracuse, it feels like the Basketball Universe can take a joint sigh of relief: Zion Williamson will be fine.

Best news possible for Zion: He’s been diagnosed with a Grade 1 right knee sprain, per release. His status is day-to-day.

Look, I was at Cameron on Wednesday; you could feel the air exit the building immediately. It was spooky and weird and as someone that cares about the game, I’m thrilled he will be OK.

It’s also obvious things got a little sloppy for the Blue Devils on both ends of the floor sans Zion; he covers the entire court on defense as the best help defender in the country, blowing up pick-and-rolls, protecting the rim and denying passing lanes. Even without Williamson, though, Duke held go-go UNC — a high-flying offense — to just 1.01 points per possession. A big part of that effort: Tre Jones.

As he’s done to several high-profile opponents this season, Jones harassed Coby White. This was an absolute bulldog effort from Jones, who gives up both height and speed to the 6-foot-5 White. In 28 minutes of action, White turned the ball over a career-high six times (33 percent turnover rate), two of which were the direct result of a steal by Jones.

Jones finished with four steals and a block. And if he wasn’t the won taking the ball from White, he certainly played a disruptive role.

Similar to Chris Paul, Jones plays with dedicated focus on defense and has the ability to leverage his lack of height into an advantage. Jones has a profound ability to dig into taller opponents; at times, it looks like he’s paying rent to live inside the jersey of his opponent.

White slumped from the field in this game, too: 3-of-14 field goal attempts (1-of-6 3PA, 25 eFG%). According to Synergy, White was just 1-of-9 on attempts with Jones as the primary defender.

The jumper continues to be a mystery, however; Jones went just 1-of-11 (1-of-6 3PA) from the field against UNC. For the season, Jones has a sub-39 percent effective shooting rate on spot-ups; he’s also shot just 38.9 percent (41.7 eFG%) out of the pick-and-roll. Jones is still a surefire NBA prospect, but when his jumper catches up to his defense — if that happens — look out.

It may get lost in the shuffle, but it’s worth remembering: Luke Maye was the one guarding Zion Williamson when things went haywire for Duke on Wednesday. Let’s just say that’s a matchup Williamson would’ve felt awfully comfortable attacking. And on the other end, Maye may have found things far more challenging with the nation’s best defender on him.

However, that’s not how the chips fell, and Maye — with more breathing room — ran wild, which he tends to do against local rivals NC State and Duke.

Had the same thought last night. He loves to cook the locals https://t.co/RNz9hvbtoU

After scoring 30 points against Duke this week (12-of-17 FGA inside 10 feet), Maye is averaging 27.3 points (32.8 per 40 minutes) on 57.7 percent shooting and 12.7 rebounds (15.2 per 40 minutes) against the Pack and Devils this season. He’s also shooting 60 percent on post-ups in those games, per Synergy. Maye had nine layups at Cameron Indoor and pulled down three offensive rebounds, too.

Louisville features a good, balanced offense; the Cards rank inside the top 25 nationally in adjusted efficiency, and feature three guys that can go get a bucket: Jordan Nwora, Christen Cunningham and Dwayne Sutton.

Without much access to its pick-and-roll attack, Louisville had all kinds of issues vs. Syracuse’s zone. The Cards went just 6-of-28 on 3-point attempts (21.4 3P%), including 3-of-20 on catch-and-shoot attempts (15 3P%) on half-court spot-up possessions.

but i think chalking things up to this team lacking talent or coming back down to earth is doing a disservice to the strides they've made. the criticism is warranted because these guys are better than this. i really believe that.

You could see it coming: Florida State’s schedule was about to flip, and the Seminoles would have the opportunity to do so serious damage. Now, at the close of February, the win over Clemson marked eight straight victories for FSU, which has an adjusted offensive efficiency of 117.3 over the last 10 games — the 18th best mark in the country.

During ACC play, Kabengele has grabbed 13.2 percent of Florida State’s misses while on the floor; that ranks third in the league, per KenPom. On the season, Kabengele is now shooting 75.7 percent (1.44 points per possession) on put-back attempts.

Also, Terance Mann, I see you, bud. Mann is shooting 46 percent on 3-point attempts (48.1 3P% in ACC games) and scoring 1.14 points per possession on spot-ups, according to Synergy. For a guy known as a prodigious slasher and driver of the basketball, this is great work as well.

It’s become old hat for me to point out that Virginia Tech’s offense has faced some growing pains while playing without guard Justin Robinson. For the most part, the Hokies have still been pretty efficient on that end of the floor; although the outings at NC State and Clemson were ugly. Unfortunately, though, Tech has lost its top end without one of the best point guards in America — for now, at least.

At some point, it feels like Ahmed Hill, one of the top snipers in the ACC, has to heat back up from the perimeter. Prior to conference play, Hill shot nearly 49 percent from downtown (5.8 3PA per game).

Hill, however, has struggled mightily from deep in ACC play: 25 percent on 3-point attempts (5.7 3PA game). And that comes after he opened conference action with three 3-pointers against Notre Dame. Take out that game, and Hill — normally a skilled on-the-move shooter — has shot just 22.4 percent on 3-pointers since the conference schedule started. It’s probably reductive to say, but he misses the juicy catch-and-shoot looks created by Robinson.

A veteran, though, Hill has found other ways to contribute. He’s shot 62.5 percent on basket cuts and scored 1.25 points per possession in transition.

But Virginia Tech desperately needs his perimeter shotmaking to come back online. At full strength, the Hokies can be exceptional on offense; however, Hill’s perimeter accuracy plays a key part in that.

Tragedy struck this week after Syracuse’s home win over Louisville, when coach Jim Boeheim accidentally struck and killed a man on the interstate. Boeheim will coach on Saturday night, the school announced Friday afternoon.

I usually keep it pretty basketball-intensive in these columns, but I’ll be honest, it feels a little ridiculous to do that here, in this specific space. (Then again, what isn’t ridiculous?) Let’s just hope everyone is OK and can enjoy some communal therapy on Saturday night. Be safe, everyone.

With Markell Johnson on the Struggle Bus against Boston College, NC State needed all of the perimeter offense it could get from Devon Daniels, C.J. Bryce and the invariably-reliable Torin Dorn. State held on to win in overtime, but it wasn’t exactly pretty in Raleigh.

The Kevin Keatts era at NC State: Let’s look under the hood https://t.co/DeGotYlSs2

That perimeter trio stepped up, though and combined for 53 points while shooting 15-of-24 on field goal attempts from inside of eight feet (62.5 FG%), according to Synergy.

NC State is now one win away from Kevin Keatts starting his time in Raleigh with back-to-back 20-win seasons. KenPom gives the Pack a 93 percent win probability for Saturday’s home matchup with Wake Forest.

Clemson is barely hanging on to an NCAA Tournament bid, currently. Losers of three straight, including one-point defeats against Miami and Louisville, the Tigers desperately need to make up ground over the next two games: Boston College and Pittsburgh. Win these two, and you’re poised for a strong regular season finish going into Charlotte.

This season has been a sluggish one for the Tigers in terms of scoring the ball; however, Clemson hung 41 second-half points on a good FSU defense this week. In those final 20 minutes, Clemson went 6-of-11 shooting out of the pick-and-roll (ball handler and roll man). The Tigers also shot 4-of-6 in transition, too. Can they get more of that going forward?

NBA formally proposes to lower draft age from 19 to 18