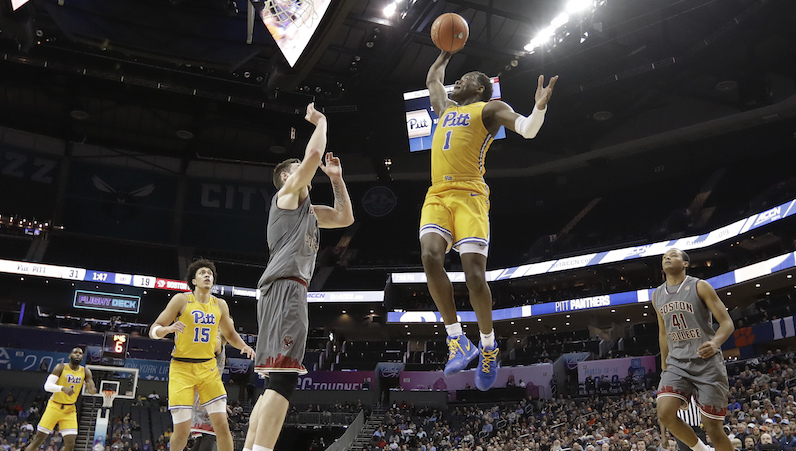 The first day of the 2019 ACC Men’s Basketball Tournament got underway in Charlotte with three games. Here’s a quick stats recap of what happened on Tuesday at Spectrum Center.

Dealing with foul trouble, Chris Lykes played just 28 minutes in Miami’s 79-71 win over Wake Forest. On the attack, the Hurricanes scored over 1.1 points per possession (57.5 eFG%). Even with Lykes (0-of-3 FGA out of the pick-and-roll) on the bench, Miami was still able to generate half-court offense.

On the other end, Jaylen Hoard showed flashes of his NBA potential and skill set. Hoard went a combined 4-of-6 on spot-up and roll attempts, per Synergy. However, it was mixed with the inconsistencies that plagued his freshman season, too. Hoard turned the ball over five times (29.6 percent turnover rate) — his 13th game of three or more turnovers.

More Jaylen Hoard on his future: "Me and my parents, we talked about it before the season. But during the season I told them I don’t want to talk about it."

In the first half against Georgia Tech, Notre Dame got whatever it wanted. Mike Brey, looking dapper without a jacket or tie, had his club ready to roll against Tech’s swarming zone defense. However, in order to advance to Wednesday, Notre Dame still had to hold off a ferocious second-half comeback from the Jackets.

Unfortunately for the Irish, Laszewski collided with Brandon Alston of Georgia Tech — much to the frustration of Brey, who yelled, “Check the tape!” after the incident. X-rays on his back were reportedly negative; however he Laszewski didn’t return.

Xavier Johnson, Trey McGowens push Pitt to the 2nd Round

In the Day 1 nightcap, Pittsburgh survived at late push from Boston College — the Eagles outscored the Panthers 34-22 over the final 10 minutes — and moved on to the second round with an 80-70 win.

The youthful backcourt of Pittsburgh proved to be the difference, too. Xavier Johnson (32 percent usage rate) and Trey McGowens (31 percent usage rate) combined for 49 points and 26 free throw attempts. This is the fifth game of the season McGowens has put up 10+ attempts from the line.

First time seeing Pitt in person this season. And the difference in energy and engagement year over year — from the players on the floor to the guys on the bench — is substantial. Impressive for a team with one win since Jan. 14.

Johnson (one block, two steals) took whatever the defense gave him — using a slick lefty hesitation dribble to freeze multiple BC defenders en route to the basket. Once again, McGowens provided second-side playmaking and finished with 26 points on 14 field goal attempts. (Pittsburgh assisted on just six of its 22 field goals: 30.8 percent assist rate.)

McGowens and Johnson combined to go 7-of-12 around the basket, per Synergy.

Veteran sniper Jared Wilson-Frame was key, too, helping to make the teeth of Pitt’s four-out offense a three-pronged attack. JWF sank three 3-pointers, all off the catch, and grabbed nine rebounds. His pick-and-pop action in the middle of the floor was vital to Pitt’s half-court attack.

Pittsburgh will now play Syracuse in the nightcap on Wednesday.

Ky Bowman: Taken out of the game

When these two teams met back in mid-February, Boston College won 66-57, but Ky Bowman had a rough game: 14 points (4-of-16 FGA) and four turnovers. According to Synergy Sports, Bowman shot just 1-of-6 out of the pick-and-roll, too.

Well, on Tuesday night it was more of the same. Pittsburgh flummoxed Bowman by blitzing high ball screens and forcing the ball out of his hands. Bowman turned the ball over four times and shot just 3-of-10 from the field. In defeat, Bowman went just 0-of-3 shooting out of the pick-and-roll.

Far from a signature performance for Ky Bowman, but still a fan of his mentality and toughness. Physical, athletic competitor who has overcome a lot of obstacles. Will look better with more talent around him. pic.twitter.com/BlI5195Me7

BC tried some stuff to avoid the traps; early on, Bowman went off ball and came off pindown/floppy action. Then in the second half, BC tried to isolate for him; however, that worked only with mixed results.

On the backside of that defensive action, Boston College couldn’t quite generate enough secondary offense. BC’s best offense, honestly, appeared to be its press defense, which forced some second half turnovers.