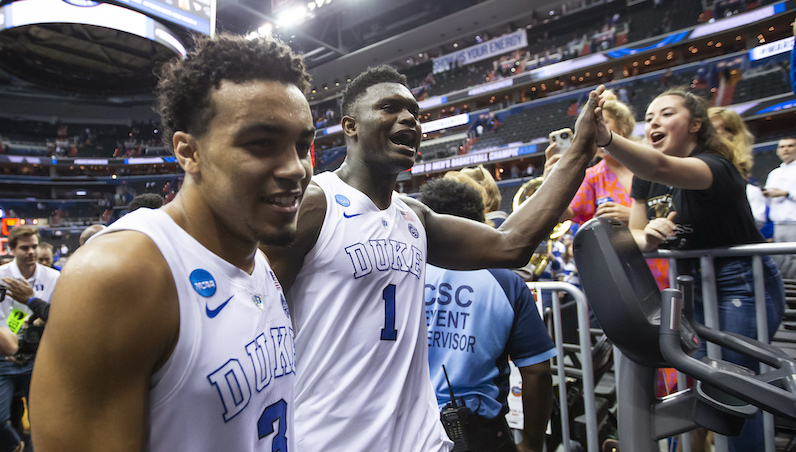 While nothing is official just yet, signs appear to be pointing in the direction of Tre Jones returning to Duke for his sophomore season. Yes, you heard that right: projected first round NBA Draft pick could head back to Durham for his second season.

To kick off this new wave of speculation, Jones posted a photo to his Instagram page late Saturday night that seemed to indicate his thought process.

Then on Sunday afternoon, Bridget Condon from ABC 11 WTVD tweeted out that — according to a source — Jones does in fact plan to return for his sophomore season.

Per source, Tre Jones will return to #Duke next year. This is huge for the Blue Devils. #ABC11

Jones, of course, could (and probably should) still go through the pre-draft process. The 6-foot-1 point guard could get feedback and receive an evaluation from pro personnel people, and then return to Duke. There’s nothing to lose from that; it’s simple information gathering.

At this point, Jones is far from a fully-formed prospect, although he’s plenty polished (14.7 percent turnover rate, 1.7 turnovers per 40 minutes), too. Jones likely lands in the top 20-25 prospects available for this season’s draft. That type of projection would land him in the first round — toward the final third.

This is rough math, but if Jones stays at Duke and becomes a top 10-15 pick in 2020, he would make somewhere from $3 million to 3.9 million — again, give or take. That’s a real difference and perhaps part of this equation, although a return to Duke means delaying his arrival at his second contract by another year — from 2023 to 2024.

Playing with Zion Williamson, RJ Barrett and Cam Reddish this season, Jones averaged 9.4 points, 5.3 assists and 1.9 steals per game (34.2 minutes). Jones, however, struggled with his jump shot for the majority of the season. He has a knack for hitting floaters and pull-ups 2s; Jones also shot 57 percent at the rim in the half court, which is pretty good.

From downtown, the struggles ensued, though. Jones shot just 26.2 percent on 3-pointers this season (27-of-103 3PA), although he did go 5-of-7 from deep in the Sweet 16 against Virginia Tech.

Where Jones really butters his bread, though, is on the defensive end. An on-ball pest, Jones is elite when it comes to applying ball pressure, turning his hips and recovering. He averaged 2.2 steals per 40 minutes this season.

Is he the next De’Andre Hunter?

If in fact Jones does decide to return, it feels similar to the decision De’Andre Hunter made 12 months ago — choosing to return to Virginia for his redshirt sophomore season. It’s not apples to apples; Hunter and Jones are very different prospects. However, there are some parallels, and if Jones is at Duke for a second tour of duty, he has the potential to be ACC Player of the Year and Defensive Player of the Year.

Jones would also, hypothetically, raise the floor and ceiling of this Duke team. In Charlottesville, that’s worked out splendidly for Hunter and UVA. Hunter solidified himself as an NBA lottery pick, was named ACC Defensive Player of the Year and Virginia’s within one game of a national title, too.

Next season is a rebuilding one in the ACC; with Jones back, Duke would look awfully powerful, though. His return would make Duke the likely destination for 5-star power forward Matthew Hurt, a top-10 prospect in the 2019 class that’s set to announce his decision on April 19.

The Blue Devils already have a top-10 recruiting class with 5-stars Vernon Carey Jr. and Wendell Moore — along with combo guard Boogie Ellis, a top-35 prospect.

You never know with transfers and decisions to go pro, but Duke could potentially return Marques Bolden, Alex O’Connell, Jack White, Javin DeLaurier and Jordan Goldwire — plus Joey Baker. These are solid, versatile pieces, which Jones would tie together perfectly.

What happened to Shamorie Ponds against Duke, Jones