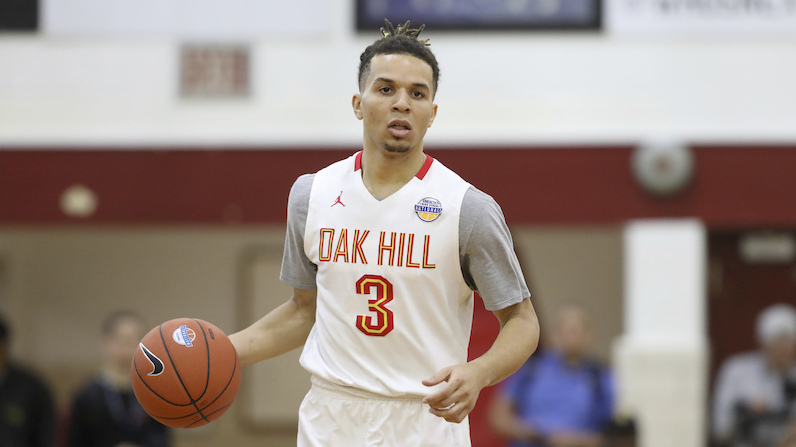 Roy Williams and North Carolina want to play fast and score lots of points. Next season, you and everyone else will find Cole Anthony at the head of North Carolina’s secondary break; on Tuesday morning, the 5-star combo guard committed to UNC during an appearance on ESPN’s Get Up.

According to 247 Sports, Anthony ranks as the No. 3 overall prospect in the 2019 recruiting class and the top combo guard. In the end, Anthony picked North Carolina over Notre Dame, Oregon and Georgetown. He joins fellow 5-star recruit Armando Bacot and Jeremiah Francis, a 3-star guard, in UNC’s 2019 class.

Over the last four weeks, Anthony has competed in a variety of prestige prep basketball events. Anthony was named MVP of the McDonald’s All-American Game (like Nassir Little a year ago); he also participated in the Jordan Brand Classic — with another strong showing. Two weeks ago, he scored 25 points and led Team USA to a victory in the Nike Hoops Summit.

Of course, Anthony’s father is Greg Anthony — an 11-year NBA veteran. The elder Anthony played his college ball at UNLV. He was the starting point guard for the dominant 1990 UNLV national championship squad.

The commitment of Anthony comes a day after Duke solidified the nation’s No. 1 recruiting class with the addition of 4-star shooting guard Cassius Stanley. As ESPN’s Paul Biancardi notes, next season’s matchup between Anthony and Duke’s Tre Jones — two potential lottery picks — should be dynamic.

With the departure of Coby White to greener pastures in the NBA, Anthony is immediately installed at the top of North Carolina’s offense. Along with Leaky Black, UNC should have a dangerous backcourt for the 2019-20 season. UNC is in the mix for several high-level graduate transfers, too.

Oettinger on the 2019 McDonald’s All-Americans