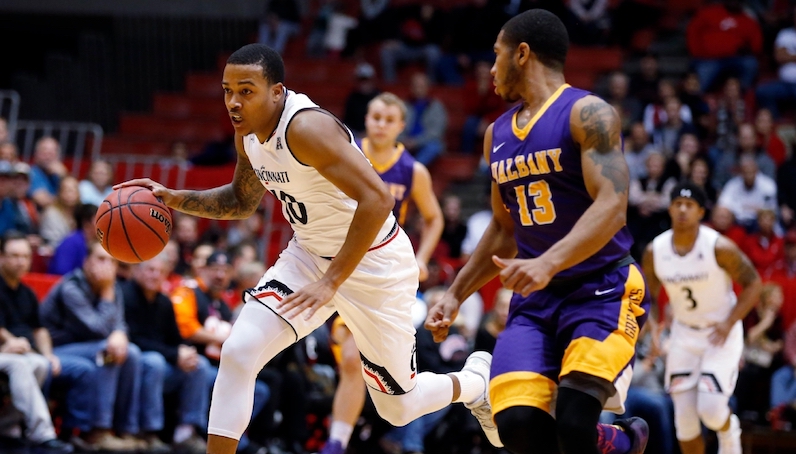 Now it’s time for one of the newest members of the ACC: Florida State grad transfer David Nichols.

A product of Chicago, David Nichols was a prep standout before going to Albany. While playing for the Great Danes in the AEC, Nichols put together an impressive three-year career: 82 games, 66 starts, an all-conference selection, over 1,100 career points and 110 three-pointers. Back in April, not too long after the Final Four, Nichols committed to FSU as a grad transfer.

Vermont defender got sent halfway to Saratoga by this crossover (to be fair, he was missing a shoe) pic.twitter.com/WJjpTFZMP1

Nichols picked Florida State — fresh off an Elite Eight run — over Oklahoma, SMU, Nevada, Butler and Xavier — among others.

The return of Phil Cofer changes everything for this FSU squad. He’s more than just a veteran forward that can score; Cofer can check multiple positions defensively, and he spaces the floor wonderfully from the 4-spot (56.8 eFG% on spot-ups, per Synergy Sports). (This is critical, especially when you factor in Terance Mann, and his proclivity for attacking the basket, efficiently.)

The ball should absolutely be in Forrest’s hands — with Cofer, MJ Walker and PJ Savoy spacing the floor, helping to create channels to the basket.

Nichols is a nice fit; he makes sense on this roster. When Forrest hits the bench, the 6-foot Nichols can run the show. However, I believe these two can and will plenty together in 2018-19.

The former Albany guard has the ability to penetrate and find shooters on the weak side of the floor or in the corners — slash-and-kick basketball. Walker (55.7 eFG% on spot-ups), Savoy (55.6 eFG% on spot-ups) and Cofer will be willing recipients of those looks, too.

During his career with the Great Danes, Nichols handed out nearly six assists per 100 possessions, and assisted on over 20 percent of his teammates’ field goals while on the floor (2,340 career minutes). He’s also adept at running pick-and-roll action; according to Synergy, Albany scored 1.29 points per possession when Nichols pass the ball to roll men on pick-and-roll possessions — good news for promising young offensive big Mfiondu Kabengele.

Some of that stuff came from him as the primary initiator of offense; however, Nichols played off the catch, too — secondary creation and spot-up shooting. That should work well next to Forrest.

For the most part, Nichols shared playmaking duties at Albany with another familiar name — Joe Cremo, a Villanova grad transfer who briefly considered Duke as a destination.

Shoot for the stars, or well, some place close

As a junior, Nichols dialed back his usage rate — down to 25.7 percent (still pretty high) from 31 percent in 2016-17. During his sophomore season, Nichols finished third in the AEC in usage rate and fourth in scoring (17.9 points). That year also included a 40-point outburst in the AEC Tournament against Hartford.

Despite taking a step back in usage, Nichols was still a prolific scorer: 14.9 points, 36.5 percent shooting from deep (8.6 3PA per 100 possessions). Nichols isn’t great at finishing around the rim (44.6 FG% around the basket, per Synergy), but he has the ability to get there. This is an absolutely nasty hesitation crossover on the second defender, right into a little hop step across the paint to create more space.

He did, however, shoot under 40 percent from the field, and saw his true shooting rate dip to under 50 percent. Nichols is a good shooter off the catch, though — 1.12 points per possession (56 eFG%), per Synergy.

One minor adjustment: he takes — and misses — a lot of midrange field goal attempts. Nearly 33 percent of his attempts from the floor last season were two-point shots away from the rim: 45-of-158 FGA (32.6 FG%). Next to more talent, and with less responsibility to create offense, that rate should reduce in 2018-19. Nichols is a good perimeter shooter, especially off the catch; he may have another efficiency gear in him with a better selection of looks.

What makes Terance Mann such a special, unique player for Florida State