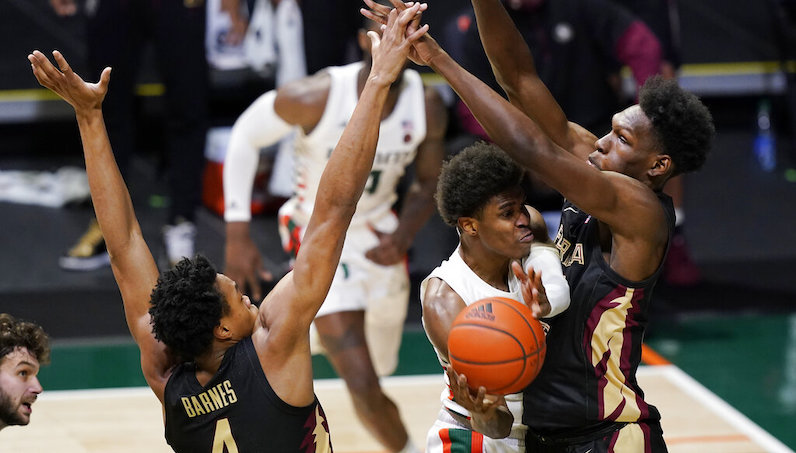 Back in April 2020, Quincy Ballard — then a 3-star center from Syracuse — was a late addition to Florida State’s 2020 recruiting class, which included 5-star headliner Scottie Barnes.

Now, after two seasons in Tallahassee, Ballard will enter the NCAA transfer portal.

During his time with FSU, Ballard has been a lightly-used backup center. It’s a crowded frontcourt room at Florida State; Ballard never quite managed to carve out a role, either. Ballard appeared in 36 games — 18 in each season — and played just 147 total minutes, scoring 38 points and grabbing 19 rebounds.

His departure could, potentially, leave Florida State with a slight lack of depth at the center position next season, too. Naheem McLeod will be back; he showed some stuff this season. However, FSU will lose 7-foot-2 veteran center Tanor Ngom.

Florida State does, however, have two centers arriving in the 2022 recruiting class: 7-footer Alaaeddine Boutayeb and 6-foot-9 Cameron Cohen, a 4-star prospect.

Leonard Hamilton will also look to be a player in the transfer portal. Florida State is one of many ACC programs in talks with Jaylan Gainey, the twice Ivy League Defensive Player of the Year.

Additionally, fifth-year forward/center Malik Osborne, one of the ACC’s top glue guys the last three years, could return for a sixth year of eligibility as well.

Can FSU get back in on 5-star SF Julian Phillips?