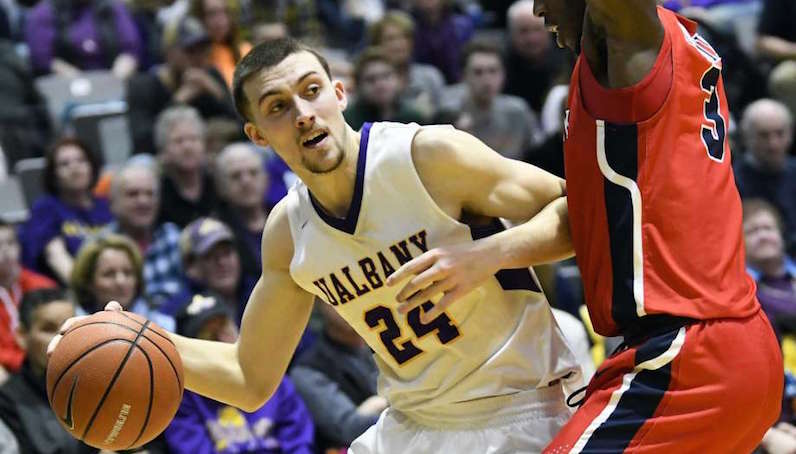 According to a tweet from ESPN’s Jeff Goodman, Duke basketball reached out to Albany grad transfer Joe Cremo.

Duke has reached out to Albany grad transfer Joe Cremo, he told ESPN. 6-4 guard averaged 17.8 points, 4.1 rebounds, 3.8 assists and shot 46 percent from 3 this past season.

Cremo, who averaged 17.8 points on 60.4 percent true shooting this season, is as coveted a player on the transfer market. An accomplished scorer (1,469 career points), several prominent programs have approached Cremo — including Arizona, Ohio State and Cincinnati, among others.

Explain the interest, though

Duke has the No. 1 recruiting class in America Durham-bound for 2018 — with four top-10 commits. The Blue Devils may still add 5-star forward E.J. Montgomery, too.

However, Mike Krzyzewski and Duke are set to experience high roster turnover; Grayson Allen has finished his four years of service in Durham; freshmen Trevon Duval and Marvin Bagley have already declared for the NBA Draft. Wendell Carter — like Bagley, a projected top-10 pick — will likely join those two soon.

Outside of a possible transfer, that leaves Gary Trent as the final question mark for next season’s roster: Will Duke’s stud wing head to the NBA, too? Currently, Trent is reportedly on the fence.

This is why Cremo is such an intriguing target for Duke; if Trent decides to head to the pros — and he’s projected as a top-20 pick — the former Albany Great Dane could work as a facsimile.

As we’ve discussed in this space several times, Trent is more than just an excellent shooter; Duke moves him around the floor, runs Trent off screens. These actions create looks for Trent to launch from deep, and produce alleys to the hoop for a roster of slashers.

Joe Cremo, who finished in the 95th percentile in terms of offensive rating (120.0), was one of the top shooters in the nation this season. Cremo splashed 76-of-166 three-point attempts (45.8 3P%); most of his damage was done off the catch, too — 85.3 percent of his triples were assisted on.

Cremo is efficient utilizing screens, too, which would be big for a hypothetical Trent replacement. As a junior, Cremo shot 46.2 percent (63.1 eFG%) and scored 1.15 points per possession off of screens, per Synergy.

You can see Cremo curling off a pindown from Zion Williamson while the 5-star dunkbot slips to the hoop; point guard Tre Jones gets to pick his poison.

Not just a shooter

Next season in Durham, the ball will frequently be in the hands of Jones, R.J. Barrett and Cameron Reddish; if Cremo heads south, too, he will be primarily used as a floor-spacer. However, Cremo can do more.

When Cremo passed out of this action, his Albany teammates scored 1.16 points per possession on 51.3 percent shooting (56.1 eFG%), according to Synergy.

NBA decision for Gary Trent tougher than other Duke freshman