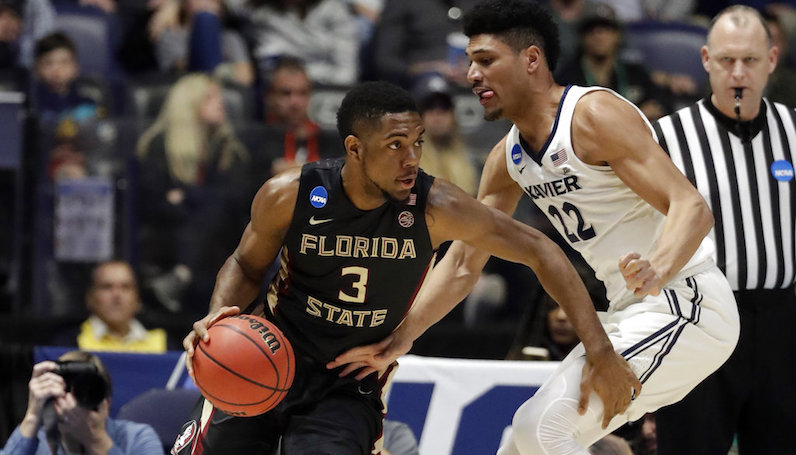 Two weeks ago, I was sitting along the baseline at the Barclays Center for Wednesday’s matinee of Florida State and Louisville. FSU fell by eight points, 82-74, but Trent Forrest played a sensational game. Forrest scored 14 points on 6-of-8 shooting, dished out six assists and grabbed five rebounds.

He was an absolute bowling bowl attacking the hoop — good luck slowing down the 6-foot-5 215-pound Forrest when he starts rambling downhill.

Late Sunday night, in a Tennessee-based hockey arena, Forrest had it going again. The sophomore guard started just two games for Florida State this season, but over the last five games, Forrest has played 73 percent of the point guard minutes for Leonard Hamilton, per KenPom.

The Forrest and The Trees

Florida State outscored Xavier 29-16 over the final 10 minutes of the second round contest, and won 75-70. Trent Forrest was a prominent participant in this stretch run. According to Synergy Sports, Forrest shot 3-of-4 on transition field goal attempts; he was 4-of-7 (57.1 FG%) on shots around the basket, runners and floaters.

FSU and Xavier both like to play at an uptempo pace; it’s no surprise this affair turned into a track meet. That’s just to Forrest’s liking, though. For the season: Forrest scored 1.18 points per possession in transition — 14th in the ACC, per Synergy. Forrest, who leads FSU with an assist rate of 26 percent, shot 67.3 percent on transition attempts, which ranks third in the ACC.

Forrest scored 13 points in the victory; seven of those came in the final 10 minutes of the games, including two layups — one of which was an and-one. He also assisted a PJ Savoy three-pointer. Hey, speaking of…

3J Savoy: Does Work, too

Ah, yes, last night was a good one the ACC Analytics page. After a lost senior season for our patron saint Bonzie Colson, we feels as they we were owed this, too. Because Florida State doesn’t win this game without PJ Savoy — another of our favorites — doesn’t do his thing.

After a Trent Forrest steal, Savoy lifted for a three-point attempt that splashed down with 1:12 left in the game; the jumper put FSU up 71-70. It was Florid State’s first lead since the 2:07 mark of the first half, and proved to be the game-winner.

Two of Savoy’s three-point makes came in transition, too. For the season, Savoy has scored 1.44 points per possession (73.5 eFG%) in transition, according to Synergy. That ranks third in the ACC in efficiency amongst players with at least 30 transition possessions.

On spot-up attempts, Savoy has a sizzling effective shooting rate of 58.1 percent this season — good for 1.13 points per possession.

Next up for Florida State: Gonzaga, last year’s national title runner-up and the No. 4 seed in the West Region.

The Zags narrowly escaped an upset in round one against UNC Greensboro; however, Mark Few’s Bulldogs rebounded nicely with a round of 32 win over Keita Bates-Diop and Ohio State, 90-84.

Gonzaga ranks 20th nationally in adjusted defensive efficiency, per KenPom; the Bulldogs have held opponents this season to an effective shooting rate of 47 percent — good for 20th in Division I.

According to Synergy, Gonzaga allows 0.92 points per possession in transition, which ranks 19th in the nation. The efficiency of Trent Forrest in transition could be a barometer for FSU’s success in this game.

However, opponents have shot 35.1 percent on three-pointers against Gonzaga — 186th in Division I basketball. On spot-up attempts, Gonzaga has given up 0.96 points per possession, which ranks 229th in the nation. Perhaps PJ Savoy can shake loose for some more triples.