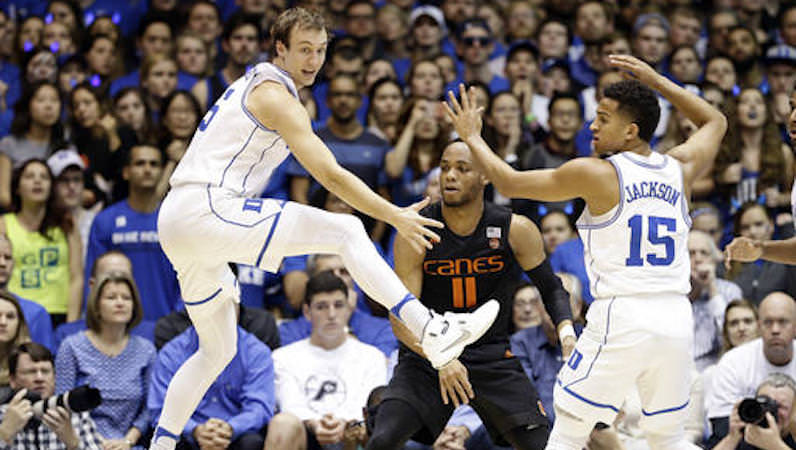 Death from above: How do you stop what you can’t reach?

That is the code Roy Williams and the Tar Heels will have to solve Thursday evening against Duke. That is when they will need to stop the most complete offensive player in the ACC — Duke’s Luke Kennard.

Kennard, who ranks third in the ACC with 19.8 points per game, is an incredibly intelligent player. The way he moves without the ball bends defenses until they break — just ask Wake Forest.

The lefty is selective, like a great baseball hitter: He knows which balls he wants to hit. Kennard will dart of a down screen. If he is passed the ball, he will look to score, but if the shot is not there, Kennard is happy to kick it back out and look to run off another screen. He punishes defenses from a distance and has countermoves to your counters.

He’s deft at using head or shoulder fakes to get a defender leaning in one direction — classic misdirection. Now you see him, now you don’t.

Defending him requires stamina, attention to detail and patience — it is not easy running through a maze of screens. Defenders want to stay tight and take away his airspace, but that can be a dicey proposition; if you get too close, he will burn you, too.

Kennard draws 4.7 fouls per 40 minutes, according to KenPom.com, and he’s lethal from the line, where he makes 85 percent of his attempts. That equates to 1.7 expected points per possession — which is bad news bears for opposing defenses.

The sophomore’s efficiency numbers are so good it is almost comical. KenPom rates him as the 13th most efficient offensive player in the nation, producing 132.7 points per 100 possessions. On spot-ups, Kennard scores 1.42 points per possession, according to Synergy Sports. He shoots 58.4 percent on such possessions, which ranks second in the ACC — behind only London Perrantes. That’s the backbone of Duke’s pristine slash-and-kick offense.

Amile Jefferson is one of the best screeners in all of America; when he has missed time with injuries this season, Duke lacked more than his double-digit scoring. He helps facilitate the offense by aiding ball reversals in the middle of the floor and getting involved in Duke’s screen game. Jefferson and Kennard have superb chemistry in dribble-handoff (DHO) action, and that is not just the eye test — the numbers reflect this, too.

Kennard is shooting 52.1 percent off of screens this season, which ranks second in the ACC; only Pittsburgh’s Michael Young tops that number, per Synergy. Duke’s star southpaw has somehow been even more deadly on DHOs: 1.44 points per possession (No. 26 in the nation) on 58.1 percent shooting, according to Synergy. Kennard is one of only three ACC players to have recorded at least 30 possessions out of handoffs.

North Carolina may or may not have its best perimeter defender available Thursday night. Theo Pinson is still nursing a right ankle injury, which he suffered last month. If Pinson is not ready to roll, then Kenny Williams and Justin Jackson will have to be up to the challenge of stopping Kennard.