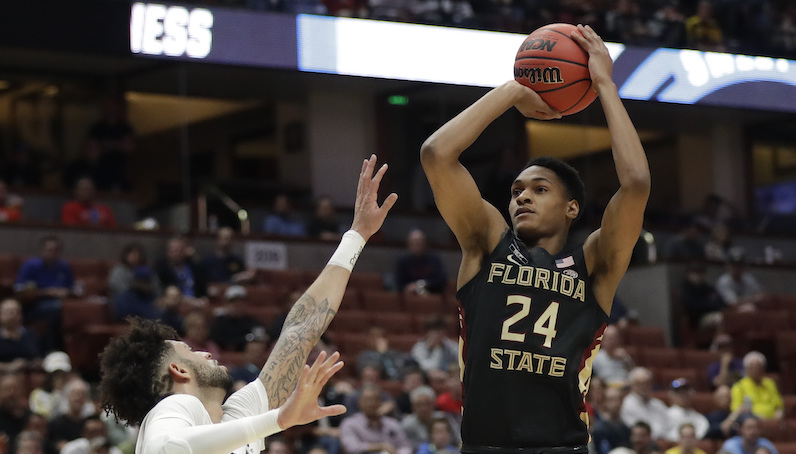 The 2019 NBA Combine takes place this week up in Chicago. Over 20 percent of the players invited to participate in this year’s event (14) played in the ACC last season. Most of those guys have already committed to staying in the draft; Jordan Nwora of Louisville is the one prospect that’s left the door for a possible return open.

Other ACC players received G League Elite Camp invitations, but could also decide to return to college, too. Virginia’s Mamadi Diakite is a prime example of this — along with Oshae Brissett of Syracuse and Duke’s Javin DeLaurier. There are also prospects, like NC State’s Markell Johnson, who didn’t receive an invite to either event, but are testing the waters and working out with teams.

For this exercise, though, we will look at one of the top under-the-radar draft prospects in the country, one that we know will be back in the ACC for the 2019-20 season — Florida State’s Devin Vassell.

On the surface, Vassell’s numbers don’t exactly pop. That’s mostly because Vassell, as a freshman, played less than 11 minutes per contest in a crowded wing rotation: 4.5 points and 1.5 rebounds per game. One can easily expect that to change in the 2019-20 season, though, especially with Terance Mann (1,174 minutes) and Mfiondu Kabengele (27.5 percent usage rate) off to the NBA — along with the departures of PJ Savoy, Phil Cofer and David Nichols.

That’s a lot of touches, possessions and minutes — and experience — that just left town. This means two guys with serious NBA potential — Trent Forrest and Devin Vassell — will get a full season together to showcase what they have to offer to NBA teams. (MJ Walker will factor into this equation, too.)

Vassell averaged two steals and 1.1 blocks per 40 minutes, too. According to Bart Torvik’s site, he was the only ACC player — among those that played in at least 20 percent of their team’s minutes — to shoot 40 percent on 3-pointers, and have a 2.5 percent block rate and a 2.5 percent steal rate.

Most of his work from deep, unsurprisingly, came off the catch. According to Synergy Sports, Vassell scored 1.4 points per possession (70.2 eFG%) on no-dribble jumpers from spot-up possessions. That ranked No. 5 in the ACC (minimum 40 possessions), behind only Ty Jerome, Ty Outlaw, Markell Johnson and Coby White.

Mostly playing on the second side of the offense, over half of Vassell’s field goal attempts this season were 3-pointers (52.1 percent); in ACC play, his 3-point attempt rate jumped to 66 percent.

Furthermore, every single one of his 26 3-pointers were assisted on, including this bomb from the ACC Tournament over a Nickeil Alexander-Walker closeout.

While the majority of his shot attempts came from beyond the arc, Devin Vassell showed some off-ball mover skills that resulted in finishes from other levels of the floor, too. Vassell shot 63.2 percent at the rim (24-of-38 FGA), per Bart Torvik’s site, though his half-court number at the basket are less desirable, according to Synergy.

If Vassell, who had six dunks this season, could unlock more gravity as an off-ball cutter and off-screen shooter, it would have a profound impact on his outlook as a prospect. Florida State doesn’t run a lot of off-ball motion actions, but that’s Vassell’s next step. Right now, he’s mostly a standstill shooter from deep.

Event though he hasn’t shown much of it yet, that doesn’t mean it isn’t there. Vassell plays with good instincts and body control. Again, in a relatively small sample, Vassell showed some ability to attack the offensive glass (4.3 percent offensive rebound rate) and finish. He was 5-of-7 on put-back attempts (71.4 FG%) after an offensive board, per Synergy.

It’s hard to find a trustworthy listing online of Vassell’s wingspan, but he clearly has the ability to contest shots on closeouts and disrupt passing lanes. In his 353 minutes of action this season, Vassell proved to be a quality stocks (combined steals and blocks) player. He averaged over three stocks per 40 minutes this season, which is really solid.

With Mann and Forrest prowling around, Vassell defended more secondary options as a freshman, though he did spend a little bit of time on Ja Morant during Florida State’s NCAA Tournament win over Murray State. (He was one of, like, six or seven FSU players that checked Morant in the first half, alone.)

Forrest is a bulldog defender, and he’s back for another season of hounding opponent ball-handlers. Vassell offers serious switch potential, though. He can guard four positions in college, and the rising sophomore wing should draw more primary assignments, too. Regardless, his focus should remain on being a quality off-ball help defender — don’t ball watch, rotate, closeout hard.

That stuff isn’t exciting for most to talk about, but it matters: finding ways to contribute as a good team defender can raise the floor of a prospect. Plus, with his wingspan and activity level, the blocks and steals will find themselves.

Florida State will really miss the impact offense Kabengele provided around the basket; when things bogged down this season, FSU could look for the big fella at the rim (64.6 FG%) or let him get to work on the offensive glass (11.5 percent offensive rebound rate). That’s a luxury they won’t have in the 2019-20 season — complicated by the absence of Mann and his slashing, crafty power game.

For FSU to generate offense, a great deal of play-making responsibilities will fall on the shoulders of Forrest. Fortunately for Leonard Hamilton’s crew, Forrest is a wickedly physical and intelligent player. Over the last two seasons, Forrest averaged 5.6 assists per 40 minutes; he has finished two straight seasons with assist rates above 23 percent.

He also joins Tre Jones and Jose Alvarado as the only three ACC returnees for next season to post an assist rate of 20 percent and a steal rate of three percent during the 2018-19 season.

Forrest will need to cut down on his turnovers, although his turnover rate dropped to under 17 percent in ACC play, which is solid. Regardless, that dude loves to get downhill and play slash-and-kick basketball; this makes for a promising pairing in the half-court offense with Vassell.

It can’t be all on Forrest for offensive creation, though, and Vassell may have to showcase more off-the-dribble juice as a sophomore. According to Synergy, Vassell was just 1-of-11 (9.1 FG%) on half-court off-dribble jumpers this season.

However, this type of catch-and-shoot action could be the bread-and-butter of Florida State’s half-court attack. In terms of skillsets, it’s right in the wheelhouses for both Vassell and Forrest, too.

Vassell posted a turnover rate of just 10.3 percent this season, which is great; but that’s with him functioning as shooter/ball-mover on offense. That’s a number to monitor next season, especially if his role changes significantly in Florida State’s offense.