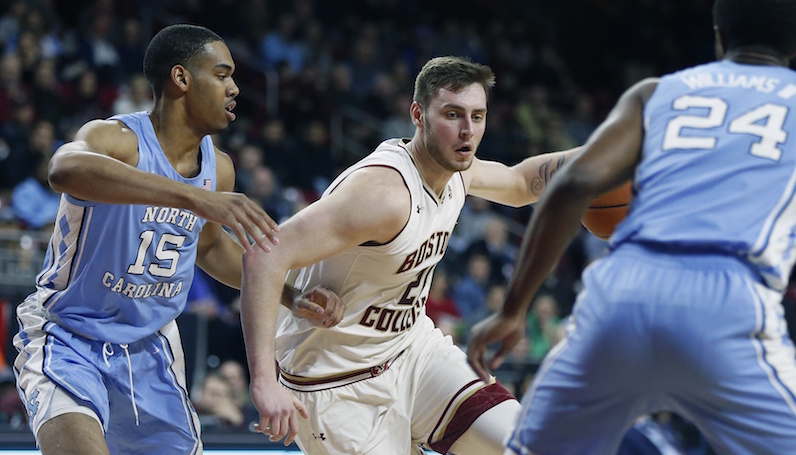 Well, by this point, we know which teams will have the top-four seeds in next week’s ACC Tournament. However, there’s still a lot to settle over the next week or so — as several ACC teams make a desperate push for the postseason.

Currently, nine ACC teams project as NCAA Tournament teams, according to Bracket Matrix. For some teams, though, that distinction seems a bit tenuous. Before the final weekend of conference play, let’s check out one number to know for each team.

I’ve written a lot about Virginia’s offense recently, so we’ll keep this quick. The advent of this team’s continuity ball screen offense has been a tremendous discovery for the Cavaliers this season. There’s a lot that goes into that play design, which we’ve gone over before; however, let’s just take one second to look at just the end result.

Two of Virginia’s bigs — Jay Huff and Mamadi Diakite — have benefitted greatly from this evolution. According to Synergy Sports, Diakite (91.7 FG%) and Huff (66.7 FG%) have both scored over 1.3 points per possession on basket rolls this season. Diakite (1.67 points possession) ranks second in the ACC in efficiency on said possessions, too.

Back on Tuesday, Duke escaped its home finale with a last-second win over Wake Forest. In the final home game without Zion Williamson, the Blue Devils struggled on offense, though: 0.95 points per possession (47.4 eFG%). Duke, according to Synergy, shot 5-of-15 on catch-and-shoot 3-point attempts (33.3 3P%). Alex O’Connell, who has given Coach K a nice source of offense recently, accounted for two of those makes, too.

For the season, Duke’s shot an unremarkable 30.9 percent on 3-pointers, which ranks No. 328 in the country. However, they offset that barren number with remarkable paint efficiency and transition scoring — when Zion Williamson plays, that is.

While RJ Barrett has helped replace some of Zion’s tremendous production, he can’t do it all, especially when opponents can load up to stop him.

It’s time to give another shoutout to North Carolina’s Garrison Brooks, who continues to emerge as one of the top rotational bigs in the ACC. During conference play, Brooks has posted an offensive rating of 128.3 — No. 3 in the ACC, per KenPom — while avoiding turnovers (0.9 turnovers per 40 minutes) and shooting efficiently (57.3 eFG%).

Brooks doesn’t play way above the rim (26 dunks) like some other recent UNC 4/5s, but he’s wildly productive around the basket, as Adrian Atkinson notes.

Brooks, who has started all 30 games this season and played over 63 percent of North Carolina’s available minutes in ACC play, has worked well as a high-low pass/finish hub in the offense, too.

By this point, everyone knows about his defensive capabilities — 1.1 steals and 0.8 blocks per 40 minutes — which are solid. Every single game, this guy brings quality two-way production to the table, which Roy Williams must appreciate. For now, he’s a wonderful role player — like Kenny Williams — to feature around UNC’s higher-usage players.

No one still has just five – and hasn't been named the award winner since the Louisville loss at home pic.twitter.com/QOeSmUMWzh

This marked the ninth time this season Walker’s hit multiple triples in a game; FSU is 8-1 in those contests. The Seminoles need his shooting stroke.

Back to Tuesday: man, Terance Mann was good. Florida State forced turnovers, which triggered the comeback, including two from Mann. In the half court, though, two-guard actions with Trent Forrest and sets run for Mfiondu Kabengele helped sustain things.

After a blistering start on the road, things went south quickly for Virginia Tech in Tallahassee. Foul trouble limited Kerry Blackshear Jr. to only 23 minutes of action, which just isn’t enough for the Hokies. Blackshear, who also had four turnovers, is far too important to this team’s offense to only play half of the game. Tech needs his post-up game, half-court facilitation and work on the offensive glass.

Related to that, Virginia Tech shot under 30 percent on 3-point attempts (49.1 eFG%), turned the ball over on 21 percent of its possessions and assisted on 11 of 22 field goals (50 percent assist rate). Those are all well off Tech’s season averages.

While his 3-point shot has fallen off some in conference action (3 3PA per 40 minutes, 31.1 3P%), Christen Cunningham has played brilliantly in his lone season of ACC basketball. Chris Mack couldn’t ask for more.

The veteran point guard has assisted on 34 percent of his team’s field goals (second in the conference) while on the floor in league play — 7.1 assists per 40 minutes. He’s the ball well from the line and inside the arc, too, as evidenced by his 58.8 percent true shooting rate.

Earlier this week, Syracuse had its 2-3 zone absolutely shredded by Virginia. In total, UVA hit 18 3-pointers and scored 1.33 points per possession. According to KenPom, that’s Syracuse’s least efficient defensive performance of the season, and the first time since January 2017 an opponent has scored over 1.3 points per possession against the Orange.

So, yeah. NC State did a bad thing this week when it lost at home to Georgia Tech. Immediately, an already flimsy resume took a turn for the worse. State shot just 8-of-35 on 3-point attempts (22.9 3P%); in ACC play now, the Pack ranks 11th in effective shooting (47.8 eFG%).

That said, Bracket Matrix still features the Pack as an 11-seed. This weekend’s matchup at Boston College takes on extreme significance, too. KenPom currently favors NC State by just two points, too. Boy, oh, boy. The margins are slim and cruel at this time of the year, especially when your non-conference strength of schedule is so putrid.

After that, Wednesday at the ACC Tournament becomes critical — as NC State and Clemson face-off in the 8-9 matchup.

Hey! Speaking of Clemson, the Tigers are currently bubble-licious, too. Late in the game this week against Notre Dame, things looked pretty bleak for Clemson.

After TJ Gibbs hit a 3-pointer to put Notre Dame up 58-54, Clemson had a win probability of under 20 percent, according to KenPom. Shelton Mitchell and Marcquise Reed responded with back-to-back buckets; over the final four minutes, Notre Dame scored just for more points — beyond the Gibbs three. — and Clemson pulled off the comeback, 64-62.

The result — in a one-possession games — was critical for Clemson’s tournament hopes, and also a deviation from its recent history, too.

ACC correspondent @bradjenk has been all over the close game data for a few years… https://t.co/8MBPYJePeG pic.twitter.com/yFurW9QSRC