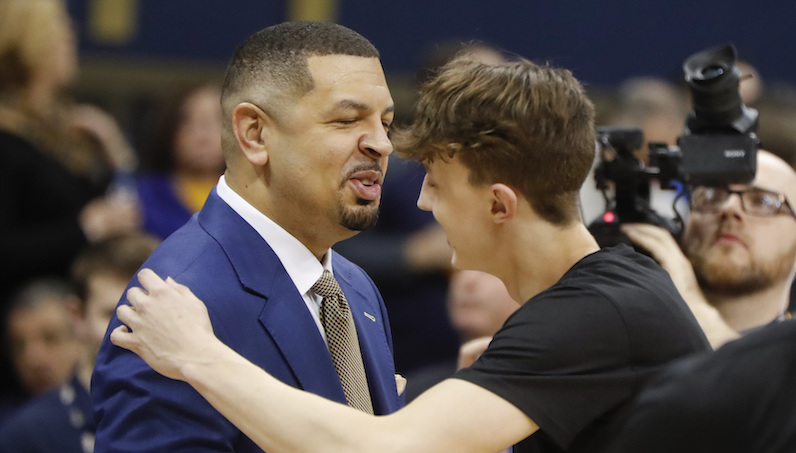 Pittsburgh head coach Jeff Capel, left, greets Duke's Alex O'Connell before the start of an NCAA college basketball game, Tuesday, Jan. 22, 2019, in Pittsburgh. Capel worked as an assistant at Duke the season before taking over as head coach at Pitt. (AP Photo/Keith Srakocic)

It’s mostly hoops in today’s ACC Daily Digest. Let’s get right to it.

First report by Jeff Goodman: Pittsburgh Basketball will trek to Italy this offseason in preparation of the 2019-20 season. Pitt will spend nine days — Aug. 5-14 — in Italy; according to NCAA rules, teams are allowed to take this abroad trips once every four seasons.

The Panthers can hold up to 10 practices, per NCAA rules, and play in a series of exhibition games.

Jeff Capel is no dummy, either. This is a great idea for his team. Obviously, who doesn’t want to see Italy and eat some awesome food? And more specifically to basketball, Pittsburgh is a talented team, but one that lacks notable experience. With Xavier Johnson and Trey McGowens leading the way, this could be a springboard trip to a program leap in 2020.

The extra time and experience are invaluable.

Syracuse also likely taking a foreign trip this year. Don’t have the specifics yet. https://t.co/Q9ARlrqiiB

The G League Elite Camp is set to take place later this week: May 12-14. For this NBA-sanctioned event, 40 draft-eligible players — ones not invited to the combine — will compete. Of that group, which is determined by a vote among teams, eight hail from the ACC, including several underclassmen.

The top performers of the G League Elite Camp can earn invitations to the combine, which is notable.