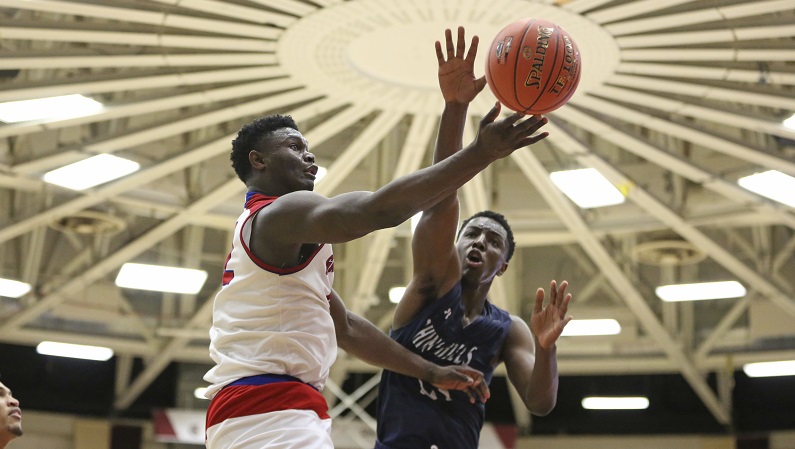 It made waves on social media late last week when word came out from Duke basketball’s combine event: Zion Williamson, a 6-foot-7 dunkbot, set a Duke record for vertical leap. Considering some of the other high-risers that have floated through Durham — Jabari Parker, Grant Hill, Justise Winslow, Corey Maggettee — this is rather impressive, albeit probably not too surprising.

It’s tough to put a number on the official measurement; however, Adam Rowe over at The Devils Den went through the Zapruder film, and seems to think Zion Williamson’s vert measured at 40 inches.

(Note: I’m also working to confirm if that above tweet also set a record for number of bunny rabbit emojis in one tweet. Standby.)

Williamson, a top-five recruit and the No. 1 power forward in the 2018 class, enters college basketball as the Internet’s favorite player, on the best incoming freshmen class in America.

And hey, speaking of defense: Williamson has me wondering again about his defensive upside.

As the game of basketball becomes increasingly position-less and switch-heavy on defense, Williamson has intriguing potential. Williamson is heavy; he weighs more than his 7-foot teammates Marques Bolden and Antonio Vrankovic. We’ll have to see how he uses his strength, length and footwork in post defense (Wendell Carter was awesome at this). We’ll also have to see how he utilizes his virally-adored athleticism to guard in space.

Can he switch? How many positions can Zion Williamson credibly guard?

Over the last four years, the Golden State Warriors have blitzed the NBA with a barrage of three-pointers and an army of switchy defenders. Golden State is at its best when they downsize and roll with 6-foot-7 Draymond Green as a small-ball center. The Death Lineup or The Hamptons Five — whatever you want to call it, it’s unstoppable.

The only real competition for the Warriors since Kevin Durant headed further west two summers ago: the 2017-18 Houston Rockets. One of the main reasons Houston, when healthy, could go toe-to-toe with Golden State: their small-ball five ace — the 6-foot-6 P.J. Tucker.

If you go by Duke’s measurement, Williamson currently outweighs Green and Tucker by 55 and 40 pounds, respectively. Does he have the quicks to defend twitchy ball-handlers in space, 26 feet from the basket?

More importantly, though, does he have the help-side instincts required to protect the rim without being a 7-foot shot-blocker? Green is a maniacal rim-protector in part because he think the game of basketball like a genius; his IQ is off the charts, and it’s matched by his absurd reaction time. He can diagnose offensive actions before they happen, and waits along Golden State’s back line to stomp out the action and let everyone in the arena know about it.

On the next level, Williamson may project as a defensive 5, especially if his offensive game is more slip-dive artist than playmaking 4.

Before the pros: Durham

The 2018-19 season with Duke will provide us with some valuable intel into the defensive profile of Zion Williamson. It was well chronicled last year: Duke relied heavily upon zone defense. According to Synergy Sports, 50 percent of Duke’s half-court defensive possessions were spent in zone — the most in documented program history.

It was an effective tactic for the Blue Devils — as their inexperienced guards and bigs struggled to defend ball screens in the man-to-man approach. Duke allowed just 0.80 points per possession (44.9 eFG%) in zone defense — No. 31 in the nation.

Mike Krzyzewski has excelled in the one-and-done age in part because of his ability to be malleable, and unafraid to differentiate from previous conventions. However, we know that on defense: he’d prefer his units to be aggressive man-to-man units that apply and extend ball pressure.

Duke now has a pool of players that’s loaded with long-armed athletes; on paper, this team looks like it has a half-dozen players capable of guarding multiple positions. It’s also a deeply inexperienced roster.

Will Duke once again be forced to retreat into a zone, especially if Marques Bolden — the team’s best true center — struggles guarding in space on ball screens? If that happens, there will be less data and intel to gather on Zion’s defense.

The Blue Devils could, of course, also mix things up and vacillate between zone and man. With Williamson and Javin DeLaurier, Coach K and Duke have multiple guys that could defend wings and frontcourt players.