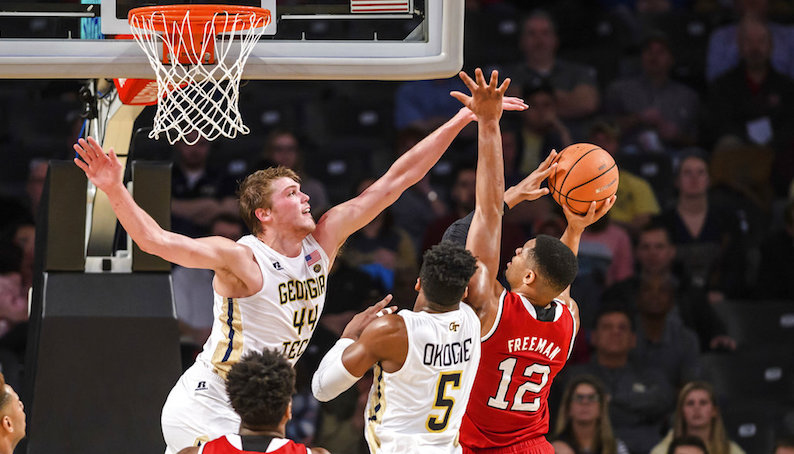 After his breakout junior season, when he helped quarterback Georgia Tech’s defense to No. 7 in the nation, expectations were reasonably high for Ben Lammers and the Yellow Jackets.

However, the 2017-18 season was memorable for only the wrong reasons — some of which took place outside the team’s 13-19 record and No. 116 KenPom ranking.

Lammers, himself, struggled to regain his junior year form — after ankle injury in the team’s third game of the season. It was a frustration for Lammers — a preseason All-ACC selection — who fought hard, but slipped across the board in a variety of key metrics.

Prior to the injury, Ben Lammers posted one of the best offensive performances of his career, when Georgia Tech lost to UCLA in China — 24 points (11-of-18 FGA, 8-of-8 in the first half), 10 rebounds and two blocks. According to Synergy Sports, Lammers was 4-of-5 on half-court attempts that came from a post-up or put-back.

That, however, didn’t keep up.

In total, Lammers shot 46.2 percent from the field — down from 51.6 percent in 2016-17. This happened as his usage declined, too. While on the floor this season, Lammers used 18.9 percent of Georgia Tech’s possessions — a below average rate; a year ago, that rate hovered at 21 percent.

Georgia Tech and Lammers had to deal with Josh Okogie and Jose Alvarado both missing time at various points in the season, due to injuries. Those are Tech’s top two perimeter players, and their absences had to have an impact on Lammers.

There’s another point of evaluation, though: the lack of a stretch-4. Quinton Stephens was far from accurate, but in 2016-17, he launched 190 three-pointers; that was the most on the team, and good for 11th in the ACC. Stephens made only 31.6 percent of those chucks, but defenses at least had to guard him out to beyond the arc, which opened more room for Lammers inside.

This season, the personnel was different, which complicated things. Moses Wright and Abdoulaye Gueye soaked up a lot of the team’s power forward minutes next to Lammers. Well, let’s just say they didn’t provide the same floor spacing as Stephens; those two went just 4-of-42 (9.5 3P%) on three-pointers this season. Yikes.

Under Josh Pastner, a big part of Georgia Tech’s offense is the back cut. The ball gets entered to a post player at the elbow; after some fake handoff action, the wing on that side of the floor sprints to the hoop.

Ben Lammers emerged as one of the ACC’s top passing big men during the 2016-17 season; he teamed up with Josh Okogie to form quite a partnership. While on the floor, Lammers assisted on over 13 percent of his teammates’ made field goals; that dipped to 10.3 percent this season.

A different kind of artist

The junior season for Ben Lammers was one of the best ever in ACC history, in terms of blocking shots. Lammers stayed strong on the defensive side of the floor; however, physically limited due to the injury, his production lagged behind, slightly.

Lammers rejected 9.9 percent of opponent two-point field goal attempts while on the court last season; that block rate ranked 21st nationally, per KenPom. The 6-foot-10 Texan still ranked inside the top 100 nationally in terms of block rate, but slipped to No. 77 — 7.3 percent.

9 ACC teams, the most of any league, make the 2018 NCAA Tournament