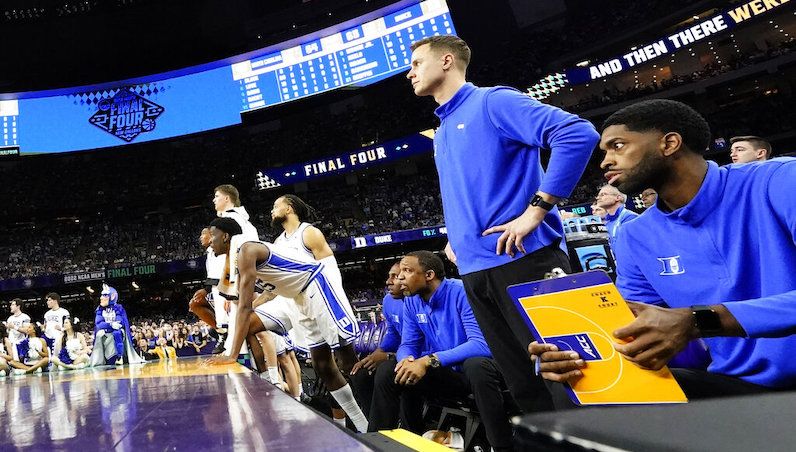 Duke assistant coach Jon Scheyer, second from right, observes play against North Carolina during the second half of a college basketball game in the semifinal round of the Men's Final Four NCAA tournament, Saturday, April 2, 2022, in New Orleans. (AP Photo/Brynn Anderson)

Tyrese Proctor, one of the top international prospects for the 2023 recruiting cycle, will announce his college decision on Thursday, April 7 (4 p.m. ET).

Proctor, who hails from Australia, plays at the Canberra (AUS) NBA Global Academy. He’s narrowed his list of options to three, including two college programs: Duke, Arizona and the G-League Ignite.

Tyrese Proctor, the No. 26 overall prospect in the 2023 class, will announce his commitment on Thursday, April 7th at 4pm ET, he tells @On3Recruits.

Deciding between Duke, Arizona, and the G-League.

Back in February, Proctor took an official visit to Duke; he was at Cameron Indoor Stadium when Mark Williams tapped in the game-winner vs. Wake Forest.

Scheyer has been Duke’s lead recruiter for Proctor.

As far as Arizona goes: the Wildcats were one of the top teams in the country and featured a roster stocked with international talent. Bennedict Mathurin, Arizona’s leading scorer, is another NBA Academy success story, who hails from Montreal. Mathurin projects as a lottery pick in the 2022 NBA Draft.

After 3 seasons at Elon, Mike Schrage expected to join Scheyer’s staff at Duke