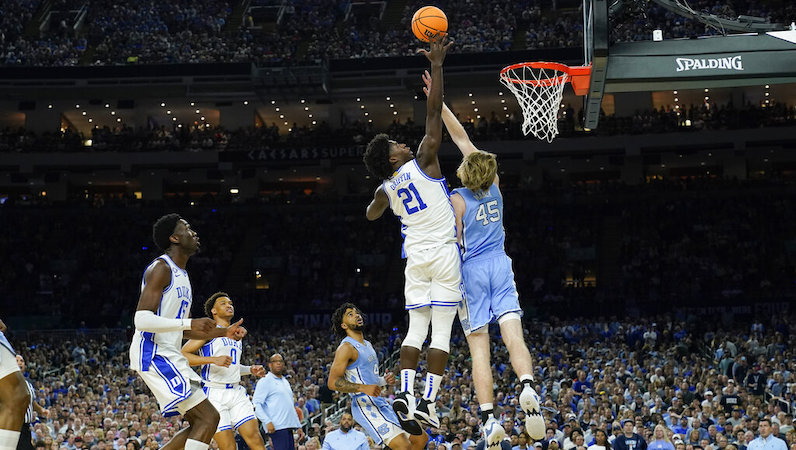 Duke's AJ Griffin (21) shoots over North Carolina's Brady Manek (45) during the first half of a college basketball game in the semifinal round of the Men's Final Four NCAA tournament, Saturday, April 2, 2022, in New Orleans. (AP Photo/David J. Phillip)

The 2021-22 college basketball season was a bit of a roller coast for Duke wing AJ Griffin. Despite an uneasy start, Griffin was a massive success. As one of the best shooters and NBA Draft prospects in the country, Griffin helped push Duke to an ACC regular season title and the Final Four.

Griffin appeared in all 39 games (25 starts) for the Blue Devils. The 6-foot-6 wing averaged 10.4 points, 3.9 rebounds and 1.0 assists per game. Griffin is one of the top shooters in the country, too. The freshman from White Plains, New York drained 44.7 percent of his 3-point attempts. Griffin also shot 54.7 percent on 2-point attempts and 79.2 percent from the line.

All of which is incredible given where Griffin started the year: another lower-body injury. After missing two seasons of prep basketball with knee injuries, Griffin had another setback. During an October practice, Griffin suffered a knee injury. Fortunately, an MRI revealed no significant structural damage.

Griffin recovered quickly, with Duke carefully monitoring his health. When the season started Griffin was on the floor; however, he was mostly bench depth as a backup forward.

Following the loss at Ohio State, Griffin emerged as a key rotation piece. The shooting talent was obvious. He took on more and more of a workload. When Duke traveled to Wake Forest on Jan. 12, Griffin drained three 3-pointers and scored 20 points in his first career start.

Currently, Griffin projects as the No. 8 pick in ESPN’s March 21 NBA Mock Draft.

Compared to his pre-injury days, Griffin has lost some of has explosive athleticism. However, Griffin’s balanced that by becoming an otherworldly perimeter shooter. His shooting stance is a little unorthodox — mostly due to a wide base. Griffin is so smooth and fluid, though. He’s able to get shots off in a pinch: both off the dribble and off the catch.

Griffin’s shooting touch is super impressive, too. There may not be a “softer” shot in the 2022 draft class. According to Synergy Sports, Griffin scored 1.17 points per spot-up possession (60.3 eFG%). He scored 1.56 points per off-screen possession (75 eFG%), which ranks No. 1 among ACC players.

Griffin’s ability to move without the ball helps him inside of the arc, too. He’s an excellent cutter, capable of reading weak-side coverages and darting into the seams of the defense for cut finishes. Griffin shot 87.5 percent on cut field goal attempts this year, per Synergy.

Ahead of June, Banchero projects as a Top 3 pick