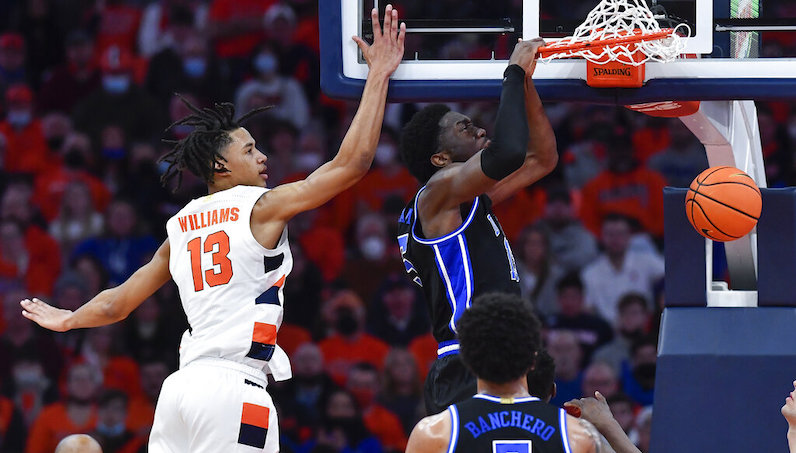 During the win Saturday at Syracuse, Duke connected on 15-of-32 3-pointers and threw down nine dunks. In total, the Blue Devils scored 1.58 points per possession. Dating back to the 2007-08 season, this is the most efficient offensive performance for Duke vs. an ACC opponent.

The Blue Devils have the personnel to crush a zone. Paolo Banchero is the top “at the nail” player in the country: a 6-foot-10 bulldozer with shooting touch and passing craft. AJ Griffin is one of the best shooters in the 2022 NBA Draft Class. Mark Williams is a 7-foot tall lob bot; he gets off the floor in an instant and can finish well above the rim.

In these scenarios, that math becomes simple: throw the ball to Banchero in the middle of the zone and let him make reads.

If the middle defender in the back line of the zone steps to Banchero after the catch, and another back-line defender doesn’t rotate down to Williams in the dunker spot, it’s an auto-lob read. Banchero finished with a career-best nine assists — to only one turnover.

Williams is shooting 76.4 percent at the rim this season; following his seven-dunk performance at Syracuse, the 7-foot center ranks No. 2 among High Major players with 73 dunks.

When the zone collapses in the lane and denies the lob, then Banchero can look to kick out to Griffin, who is usually floating around the arc, waiting to inflict pain.

Griffin, who moves intelligently without the ball, is now shooting 50 percent beyond the arc (44-of-88 3PA) in ACC play.

Notre Dame posted another 2-0 week. Both games took place in South Bend, with the Irish winning each contest by 10+ points.

During the weekend matchup with Georgia Tech, though, things got way out of hand. Four different players scored in double figures — paced by Dane Goodwin’s 17 points (3-of-4 3PA). In total, Notre Dame scored 1.34 points per possession and won by 34 points, 90-56.

Blake Wesley and Paul Atkinson led an assault on the rim, too. Wesley went 3-of-4 at the rim; he also attempted six free throws. Atkinson, on the other hand, went 5-of-8 at the rim. The Yale transfer is now shooting 68.2 percent at the basket this season.

The Demon Deacons shook off a disappointing midweek loss at Clemson, which included an injury to top reserve Khadim Sy, by crushing Louisville in Winston-Salem on Saturday.

Once again, Jake LaRavia led the way. LaRavia scored 23 points on only eight field goal attempts; he didn’t attempt a 3-pointer in the game. Instead, LaRavia went a remarkable 13-of-14 from the free throw line.

The future All-ACC forward also dished out five assists, while recording one block and one assist.

Dallas Walton went for a season-high 22 points vs. Louisville, too. The center drained 4-of-4 3-point attempts in the game. He’s now shooting 44.8 percent from deep in ACC action.

Miami split last week, 1-1. The Hurricanes went on the road and throttled Pittsburgh; however, a matchup in Coral Gables with Virginia Tech turned into a one-point victory for the Hokies.

Jim Larranaga’s club now has nine defeats on the season. When Miami falls, the defense is often the root cause. In eight of their nine loses this year, the Hurricanes have allowed an opponent to score better than 1.1 points per possession.

The win in Raleigh was all about Armando Bacot, though, who anchored UNC’s pick-and-roll coverages and lived in the paint vs. a depleted NC State frontcourt.

North Carolina’s pick-and-roll defense has been shaky this season; however, in both matchups with NC State, the Tar Heels have held their water.

Dereon Seabron and Terquavion Smith are superb offense players. Seabron is a dangerous downhill driver off ball screens, too. Without a scoring threat at the center position (Ebenezer Dowuona and Jaylon Gibson), though, UNC dropped Bacot and focused as much attention on the ball handler as possible.

The result: NC State’s drivers attacked an Unwelcome Party in a packed paint.

Bacot finished with five blocks, while Seabron shot just 4-of-10 at the rim. Overall, Smith was 4-of-11 on 2-point attempts.

On the other side of the floor, North Carolina repeatedly crushed NC State with hi-lo action: Brady Manek to Bacot.

This isn’t anything fancy. North Carolina is lining up in a Horns set and running hi-lo action after getting the defense to rotate. The pass was there seemingly every time. Manek and Bacot are truly an awful matchup for NC State’s defense.

As a result, Bacot finished with 28 points on 11-of-13 shooting on 2-point attempts, including five dunks.

The Hokies shot a blistering 22-of-27 on 2-point attempts during a one-point win at Miami, which doubles as Virginia Tech’s best resume win of the season.

All-ACC big man Keve Aluma powered the paint game for the Hokies. He finished with 18 points on 8-of-9 shooting (five dunks).

Life in the ACC can be tough. While fighting for postseason dreams, Virginia dropped two games last week by a combined five points — capped by Matthew Cleveland’s walk-off game-winner in Charlottesville.

Despite the defeats, Tony Bennett continues to receive outstanding production from forward Jayden Gardner. The man is simply a bucket.

The Reece Beekman-Gardner connection has been excellent as partnership in Blocker Mover action this season. Gardner has feasted on low-post duck-ins, which frequently result in face-up jumpers, or on various empty-side screen and short-roll looks.

Basketball is magic, man. (Or tragic, depending on your rooting interest, I suppose.)

What a moment for Matthew Cleveland and a Florida State program that just refuses to quit despite a slew of injuries.

Cleveland finished with 20 points, including three big ones that came in the final second of the game.

Leonard Hamilton. Stan Jones. Charlton Young. These men have built something special in Tallahassee. It’s incredible to watch, even in a down year.

Not much went right for Syracuse vs. Duke. If there’s a silver lining, though: Benny Williams saw 30 minutes of action and played quite well.

Williams shot 5-of-7 from the floor and finished with 14 points. This is the first time in his career that Williams scored 10+ points in a game.

What a week for Brad Brownell and Clemson. No PJ Hall, no Hunter Tyson: no problems, apparently.

First, Clemson grabbed an 11-point home win over Wake Forest. The Tigers then went on the road and took down Boston College, 70-60.

On this possession, Hunter cuts in for a layup off Clemson’s Iverson Rip (back screen) action, which takes advantage of some poor chase defense from Alondes Williams.

Playing without Sy, Wake Forest was pressed to use backup center Matthew Marsh.

Marsh played pretty well; he scored eight points on 4-of-5 shooting. However, Clemson made sure to test his mettle and mobility in pick-and-roll defense. The Demon Deacons ice this side ball screen, but Hunter simply passes to Ian Schieffelin on the short roll, who hits Naz Bohannon for the cut layup.

After setting a career-high with 21 points vs. Wake Forest, the 6-foot-3 Hunter quickly outdid himself at Boston College: a new career-high of 23 points (8-of-10 FTA) and seven rebounds.

Hunter’s now shooting 58.7 percent on 2-point attempts in league play, which ranks No. 12 in the ACC, per KenPom.

Yeah, things are pretty bleak here. Let’s focus on a positive, shall we?

Sydney Curry is a player. Over the weekend, the powerful post had his best game in over a month — scoring 28 points (13-of-18 2PA) vs. Wake Forest.

Curry’s now shooting 70 percent on 2-point attempts and has rebounded the hell out of the basketball: 23.3 percent defensive rebound rate. He’s a presence on the offensive glass, too. For the season, Curry’s averaging 12.6 total rebounds per 40 minutes.

There’s also a bit of craft to Curry’s game, which is a nice juxtaposition with his raw power. His play out of the short roll has been rather intriguing.

It was a bad, 0-1 week for Pitt, but Mouhamadou Gueye put up good numbers, again.

For the season, Gueye is shoot 37.7 percent from deep and has a block rate of 9.2 percent, which ranks inside the top 40 nationally.

Gueye and Gonzaga star Chet Holmgren are the only players in the country with 9.0 percent block rate and 36 percent shooting on 3-point attempts (50+ 3PA).

It’s been a brutal stretch of play for the Wolfpack, but you have to love the fight and skill of Terquavion Smith.

The freshman guard didn’t have his most efficient performance vs. UNC, but Smith never quit in this game and continued to slash downhill.

This is a gorgeous bit of self-creation from Smith: NC State opens the second half with its Horns Chicago action.

Smith comes off the dribble handoff and into pick-and-roll with Ebenezer Dowuona. As usual, Caleb Love gets stuck on the screen; with Bacot playing up but below the level of the screen, Smith has a pocket of space to attack. Smith gets Love on his hip and then snakes back across the screen, while Bacot sinks into the paint. Dowuona seals Bacot and Smith shows nice touch on the floater.

After finishing with a top-25 offense last season (in terms of adjusted efficiency), the Yellow Jackets have slipped down to No. 262 nationally, per KenPom. Yuck.

If this ranking holds, it’ll mark the fifth time in six seasons at Georgia Tech that Josh Pastner’s team has ranked outside the top 170 in offensive efficiency.

As always, Josh Graham contributed to the ACC Power Rankings.