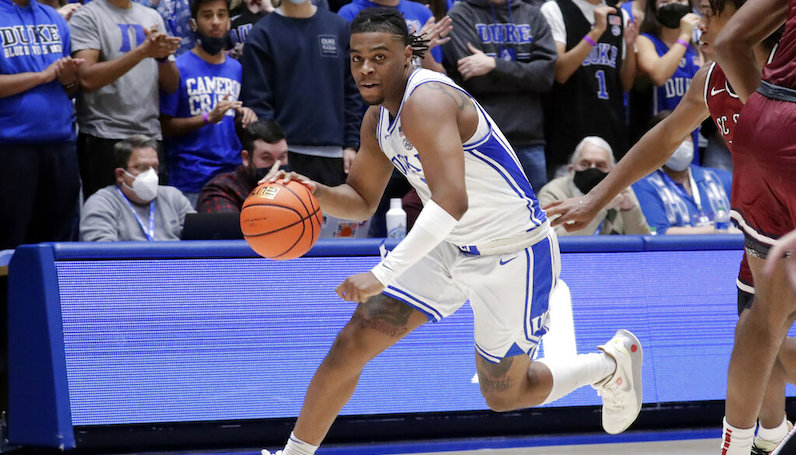 Trevor Keels has been one of the best players in the ACC this season. He’s an intriguing talent. With his strength, frisky on-ball defense and playmaking flashes, Keels has solidified has status as a likely first round draft pick.

Obviously, Keels hasn’t been perfect, by any stretch; the decision-making in advantage-creation situations can be a little hit-or-miss. Even adjusting for degree of difficulty, Keels hasn’t shot a great ball this season, either: 44.5 percent effective shooting.

In particular, Keels has struggled from the midrange: 6-of-20 on long 2-point attempts (30 FG%), according to Bart Torvik’s shot data. The majority of those attempts come off of his own dribble, too. Given his talents and strength advantage, it’s worth trying to scheme ways to utilize Keels more efficiently in the half court.

Now, Keels is plenty active on offense; he has a 21.5 percent usage rate and attempts over 14 field goals per 40 minutes. However, the are ways to funnel that usage more effectively.

During Duke’s win over South Carolina State — the team’s first game in two weeks — the Blue Devils opened the second half with a couple new half-court sets. These looks seemed designed for Keels.

After the game, Mike Krzyzewski remarked that Duke has used some of the time off, while exams took place, to install some new material.

Let’s take a quick look at a few of these half-court sets.

This play is an old standard for Duke; it’s something the Blue Devils like to run with a good perimeter shooter and a low-post target. Keels will set a baseline cross screen for the 5 (Mark Williams), then immediately come off a pindown from the 4 (Paolo Banchero). This is simple screen-the-screener (STS) action.

Neither player gets the ball on this possession, but it’s a good way to scramble the defense. South Carolina State struggles with the screen exchanges, and as a result: Jeremy Roach is open for a nice skip pass from Wendell Moore Jr.

The Blue Devils have actually run this a handful of times already this season for Keels — he’s always the screener.

Duke ran this multiple times in the win over Army. On the first of those possessions, the opposing center tried to cheat the cross screen from Keels. Instead, Williams rejected the screen and looked for a lob, which Moore recognized. (This looks like a concept that Purdue uses a lot with Zach Edey.)

The Charlotte Hornets and James Borrego have mixed this set in a lot this season as well.

For the first time this season (from what I’ve charted), Duke ran its Horns Flex set early in the second half, too. Again, this isn’t splitting the atom on offense; the Blue Devils are just launching quick-hitting flex action from the usual Horns alignment (two bigs above the arc, two wings in the corners).

Keels starts this possession by passing to Banchero at the elbow and cutting off a back screen from Williams. The first option is Keels coming off that screen. When that’s covered up, though, Keels will go to the baseline and set a flex/cross screen for Roach.

Roach, however, rejects the screen and comes off a weak-side pindown from Banchero. Eventually, the ball gets swung back to Keels, who drives and scores.

Duke ran this set a lot during the 2019-20 season. Tre Jones and Cassius Stanley were the primary targets. In fact, here’s Jones catching Boston College off guard with a cut layup off a Matthew Hurt back screen.

Here’s that same Horns Flex action. This time, though, Jones, who is covered off the back screen, sets a baseline flex screen for Jack White. The result: a Seven Nation Army slam from Jack White.

Once more, early in the 2019-20 campaign: Duke gets free throws from a Stanley post-up, after he exits the flex screen from Jones.

Back to the present: this is a nice action for the current Duke squad. The Flex invites a nominal amount of ball movement and player movement, which is a positive.

This also opens up off-ball screen opportunities between different-sized players, which can cause scheme issues for a defense. In those lapses, Duke can look to pounce.

Duke has great power and skill at the guard positions with Keels, Moore and AJ Griffin. Flex action is a roadmap for getting those three deeper post position (coming off the cross screen) vs. a scrambled defense.

To be clear, it does seem as though Duke will look to try more post-ups for Trevor Keels. The freshman from Maryland clearly has the physique (221 pounds) for that type of activity and a fondness for contact, although his foul-drawing rate (3.8 per 40 minutes) is a little underwhelming. Posting Keels up is a possible method for boosting that number, though.

In an effort to play through Keels on the block, Duke ran what looks a lot like “Buckeye” action, which is a set that several other ACC programs like to run, too, especially Chris Mack and Louisville.

Moore initiates the possession here, but things get started when Keels clear out to the wing and receives the ball. As soon as Moore passes to Keels, he exits to the weak side off a little flare screen from Banchero. That’s the generic launch of Buckeye. After that, though, the possession can flow in an endless number of ways.

Once the ball is swung back to Moore, Duke uses some slice-stagger action. First, Williams (the center) sets a slice screen for Keels (a guard) to roll down to the block. As that unfolds, Williams and Banchero then set staggered screens for Roach.

Duke ran this same look later in the second half, with different personnel on the floor.

Interestingly enough, this is also the exact same Buckeye Slice Stagger action that Jeff Capel and Pittsburgh have used, too.

Late in the 2020-21 season, NC State used a fair amount of Buckeye as well; however, within the ACC, Mack and Louisville are the primary operators.

Of course, the Cardinals used to run dozens of different actions off the initial Buckeye look, including a disguised version of Spain pick-and-roll.

Mack’s old boss at Xavier, Sean Miller, ran a lot of Buckeye in recent years at Arizona. The same can be said for Archie Miller when he was the head coach at Indiana.

So far this season, Keel has used only three post-up possessions. He’s 2-of-2 on post-up field goal attempts, per Synergy Sports (and my own charting).

Here’s the first of those post-up looks — during the season-opening win over Kentucky. The Blue Devils run a little handoff action for Moore out of Horns. When Moore’s unable to turn the corner, Keels saves the possession: he dives to the post and punishes the smaller Sahvir Wheeler.

One game later, the Blue Devils ran a designed post-up for Keels, which produced another layup at the basket. Here, Duke screens twice for Keels to help obtain good post position.

One thing to keep in mind: When Duke plays with Williams or Theo John on the floor, spacing can get a little tight.

Banchero is a ridiculous talent, but he’s also not a pure stretch-4. It’s not impossible to get to these looks for Keels from Duke’s base lineups; however, it may be worth investigating this look more when the Blue Devils go small and play Banchero at 5.

The more shooting and spacing you put around these inverted post-up looks, the better. The Keels post score vs. Army came with John as the lone frontcourt player on the floor — surrounded by four guards.

Duke is +12 in 39 minutes with those “Banchero at center” lineups, according to Pivot Analysis.

Lastly, Duke also run a little Horns Away action for Keels. Before a ball screen takes place or a pass is entered to one of the elbows, Banchero turns and sets a pindown for Keels. If the shot is there, he can let it fly from deep. Without the catch-and-shoot 3-pointer, though, Williams quickly lifts and sets a ball screen for Keels.

Keels rejects the screen and South Carolina State does a nice job switching, which stymies the possession. This seems like an opportunity where Keels left a little meat on the bone — by not actually dribbling right off the screen from Williams.

As I’ve written before, the true wildcard for Duke basketball this season is AJ Griffin. After years of battling injuries before he even suited up in Durham, Griffin has returned the floor this season. Some of the flashes have been super encouraging, especially when paired with Griffin’s pre-injury work as a prep star. There’s something to dream on.

When healthy, Griffin is as talented as anyone in the ACC not nicknamed “P5.” If Griffin’s physically able to play anywhere near his ceiling, then Duke jumps a level in terms of championship equity. He’s that special.

Drawing conclusions off a game-by-game basis isn’t ideal; however, when the sample is this small, you go with what’s available. Griffin’s had moments this season, like the November matchup with Lafayette. The victory over SC State serves as another.

During the blowout win, Griffin played a career-high 22 minutes and scored a career-best 19 points. Once again, he showed off the feathery-soft outside shooting stroke, connecting on 3-of-4 3-pointers. However, it’s what Griffin accomplished inside the paint that really jumped out.

Entering the SC State game, Griffin was just 5-of-7 shooting at the rim this season, accounting for only a small percentage of his overall field goal attempts. Given his injury track record, it’s not much of a surprise, but Griffin struggled with contact or has looked reluctant to drive all the way to the rim this season.

His most violent bursts of vertical bounce have come in the clear — when he has a runway to gather steam.

Well, Griffin seemed to make some progress vs. the Bulldogs. The freshman wing shot 4-of-4 on his 2-point attempts, including three finishes right around the basket.

This was perhaps as comfortable as he’s looked all season attacking closeouts. When Griffin touched the paint and drew an extra defender, he was ready to kick-out to open shooters.

The Blue Devils managed to get Griffin a post-up, too, off their hi-lo action out of a Floppy set. Griffin is incredibly strong. If he feels comfortable using his body to carve out space — similar to Trevor Keels — then this is another intriguing pathway for his offensive development.

You could see Griffin’s comfort level and confidence rise. Late in the game, Griffin even got into his bag a little bit — throwing out combo moves with his handle and finishing in the lane.

There’s a lot of basketball left to be played, but this is wonderful to see.