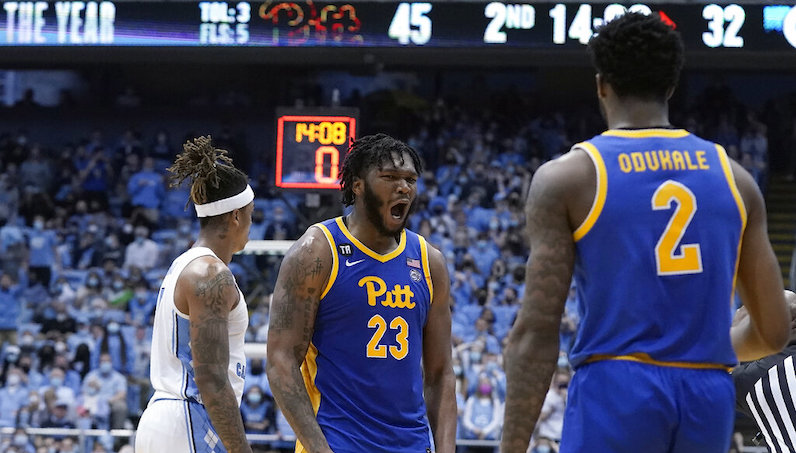 Both Pittsburgh and North Carolina entered Wednesday night’s matchup in Chapel Hill on two-game winning streaks. Led by 18 points from John Hugley and 19 points from Ithiel Horton (5-of-5 3PA), the Panthers controlled the Heels, though, winning 76-67.

North Carolina entered the game as a 13.5-point favorite; however, Pitt led by as many as 21 points in the second half.

It’s reductive to boil a season down to just one game; so many random things can happen and flip any outcome on any given night. With that said, this defeat will be a late-season hinge point for Hubert Davis and the Tar Heels.

Here’s a look at what went down.

Hugley has shown some playmaking abilities this season; he even tossed out six assists during a recent win over NC State. As a sophomore, he’s dished 2.7 assists per 100 possessions this season, which is up from last year (1.7).

Regardless, Hugley is at his best when taking his time in the paint — in the middle of Pitt’s 4-around-1 offense — and looking for his own offense. With single coverage, Hugley can go to work and punish a variety of matchups.

Hugley has done some good stuff vs. double teams this season. When Hugley senses the second defender, he has the ability to spin quickly and score.

However, when he’s forced to catch the ball further off the block, the double arrives and the weak-side zones up, turnovers can occur.

Hugley has a 21.1 percent turnover rate this season.

When the Tar Heels looked to double the post vs. Hugley, though, the weak-side rotations weren’t always there to hem in these actions.

Bacot: Uncomfortable in the Comfort Zone

On the other side of the floor, the Panthers found ways to slow down Bacot, one of the top post players in the country.

Foul trouble certainly factored in; Bacot, who ended the game with four fouls, played only 26 minutes. That’s what Hugley does, though. He draws a lot of fouls. According to KenPom, Hugley has drawn 7.1 fouls per 40 minutes during ACC play this season, which is No. 1 in the league.

Pitt also had some success doubling Bacot in the post. Bacot is shooting 66 percent at the rim this season, but Femi Odukale erases this attempt with good help defense.

During the 2021-22 season, North Carolina’s offense has had some beautiful moments of ball movement. With Manek’s ability to space out and Leaky Black’s skills as a connector, the ball will ping around the perimeter, before landing in the hands of an open shooter.

On occasion, UNC countered Pitt’s double teams with quality ball movement and player movement. Black immediately cuts to the paint when his defender, Odukale, leaves to double Bacot. Manek is spaced to the corner, which puts Pitt’s weak-side defenders in a tough spot.

Even when the ball movement and extra passes were there, small, attention-to-detail mistakes proved costly for the Tar Heels.

There were other possessions, though, when Bacot passed out of the double and the movement just stopped, which allowed Pitt’s defense to reset.

Here, Caleb Love opts to not attack the initial closeout. The ball recycles, Pitt switches a late-clock screen and Love commits a turnover.

Throughout this season, North Carolin has seen various pick-and-roll coverages torn to shreds. Bacot and Manek don’t have the foot speed to switch reliably; Blake Wesley and Notre Dame punished that option back in early January.

At times, North Carolina has done a good job downing or icing side ball screens — pinning the action on one side of the floor.

This was evident when UNC throttled NC State a few weeks ago in Chapel Hill. The Heels, for the most part, did well to deny Dereon Seabron the middle of the floor.

Of course, it really helps when Black is the on-ball defender. NC State doesn’t have a center on the roster that can threaten as a passing outlet in the middle, too.

That’s not the case with Pittsburgh and John Hugley, though.

When Bacot and Manek defend to the level of the screen, the point-of-attack pressure doesn’t offer enough punch. This is due in part to some of the on-ball defensive foibles of Love.

The sophomore guard has good size and doesn’t lack for talent; however, he gets routinely caught on screens or simply doesn’t have the interest to contain the ball.

Either way, it leaves North Carolina’s big men and help-side defenders exposed. It’s far too easy to reject screens or perform a simple crossover dribble and get downhill vs. Love.

From the Pitt game: Mouhamadou Gueye slaps Love with a screen, Jamarius Burton turns the corner and Odukale is open for a kick-out 3 when Black is forced to help.

On some of those Ram ball screen sets, Pitt’s center would follow/chase and set a second ball screen.

Defensive miscues at those mesh points allowed Pittsburgh to create the initial half-court advantage. From there, the ball movement and sluggish UNC help defense led to points.

Given North Carolina’s struggles with containing pick-and-roll advantage, this team seemed like a candidate to run more zone defense. That just hasn’t happened, though.

According to Synergy Sports, North Carolina has played only 11 possessions of zone defense this season; two of those possessions occurred vs. Pittsburgh. So far, it hasn’t worked: 11 possessions, 16 points and 6-of-9 field goal attempts.

When UNC tried a token possession of 2-3 zone at Wake Forest, the Demon Deacons did their usual thing: get the ball to Jake LaRavia at the nail and flow. LaRavia caught the ball, faced the rim and just waited until a teammate relocated for an open shot.

This is too easy.

During the Duke game, as UNC’s defense was getting crushed, Hubert Davis decided to try more zone defense. Once again, it didn’t go well.

I've wondered if/when we'd see zone defense from UNC this season — by my count, 5 zone possessions vs. Duke (7 total this season, per Synergy)

The Blue Devils are a dangerous team to zone. AJ Griffin is a gifted spot-up/movement shooter. Wendell Moore Jr. can cut and make plays. Banchero is the best nail/frontcourt connector in the country.

(As far as ACC players goes, LaRavia is likely the second best at-the-nail player in the league, behind Banchero.)

UNC was able to get a stop on one zone possession vs. Pitt — the first one. With the shot clock running down, Odukale forced a pass to William Jeffress; RJ Davis stuck his hand in at the nail and came up with a steal.

On the very next possession, though, Pittsburgh screened the top of the zone and used Horton as a baseline runner. Pitt rotated the ball and found Horton for a corner 3.

Again, North Carolina has played only a sparse amount of zone. Prior to the Pitt game, Love and freshman forward Dontrez Styles had played only 34 minutes together this season, per Pivot Analysis.

In theory: long, rangy athletes like Love and Styles should be disruptive while defending in the zone. For this tactic to work, though, teams need crisp rotations and effective communication; defenders must float around on a string.

Unfortunately, there’s no magic formula for cultivating that connection. Repetition can help, but the in-game reps just haven’t been there this season. At this point, it’s understandable if Davis doesn’t have much confidence in the zone.

Too Little, Too Late vs. John Hugley

Despite a large deficit, UNC made things interesting late in the game. As the Tar Heels entered Desperation Mode, they went small; Manek became the center and Bacot went to the bench. With Black as the de facto 4-man, North Carolina started to trap ball screens. It worked, too.

Pitt sped up on offense and the results weren’t great. Even when the ball found Hugley in the paint, the offense was still under duress.

Eventually, Pitt started to sort through the pressure and found Hugley for some necessary offense. Still, North Carolina was +7 in nine second-half minutes with Manek on and Bacot off the floor, according to Pivot Analysis.

Aided by a strong Kerwin Walton outing (3-of-4 3PA), the lineups with Manek at center played 5-out and ran spread pick-and-roll.

However, Love teamed up with Manek (as a screener) for multiple layups, including this sweet reverse from UNC’s Spain pick-and-roll action.

With those late buckets, Love had one of his best interior finishing games of the season.

Going down the stretch of the regular season, as UNC looks to mount a final push for the postseason, this kind of activity from Love is much-needed.

Love has his issues, but he’s absolutely the ceiling-raiser for North Carolina’s offense.

One of the beautiful things about sports is the randomness. Basketball games are chaotic events. There are so many different ways to track or analyze various aspects of the game. The amount of available information is greater than ever before.

Despite those advancements, man, wacky stuff still happens. Countless things can alter or reshape what we expect. One team gets hot, the other starts cold. A player has a career night. An injury occurs. Whatever.

Well, North Carolina ran into Ithiel Horton while he’s in the middle of a heater. Horton has always been a good shooter; however, his play over the last week has been sensational.

On this possession: Pittsburgh runs its Chin pick-and-roll set for Horton. Bacot plays to the level and cuts off a driving lane; Davis gets briefly stuck on the screen from Noah Collier, but he’s still able to recover and contest Horton’s pull-up 3.

During this three-game win streak for Pitt, Horton scored 61 points and drained 13-of-23 3-point attempts (56.5 3P%). He’s played 116 minutes in those three games. The Panthers are +13 with Horton on the floor and have scored 108.1 points per 100 possessions, according to Pivot Analysis.

When John Hugley and Horton have played together, Pitt is +15 over the last three games. In those 61 minutes, the Panthers have held opponents to 0.92 points per possession.