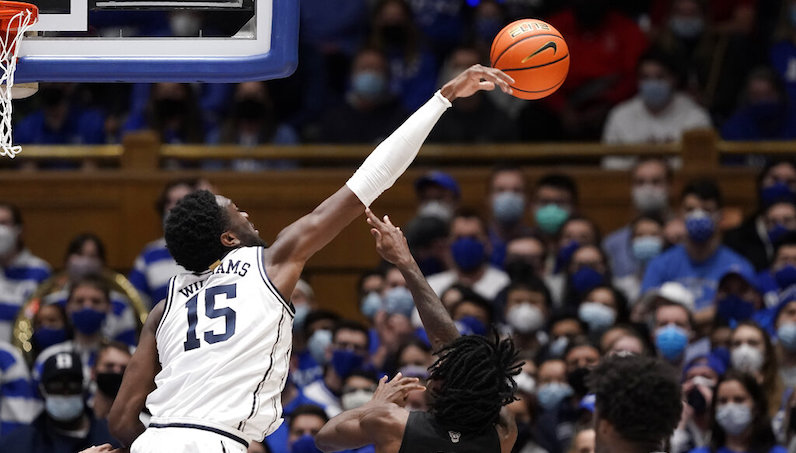 It’s cold outside, but at least there’s a lot of basketball to watch. Before things get going again, here’s a look at this week’s ACC Power Rankings — starting with Duke and North Carolina.

Following a midweek win at Wake Forest, Duke returned home to Cameron Indoor and handled business over NC State. Paolo Banchero was excellent vs. the Wolfpack: 21 points (7-of-10 FGA at the rim), three dunks and eight rebounds. Banchero also finished with four assists.

Banchero is a roving matchup-destroyer; he’s capable of shooting or facilitating from all levels of the floor, while also drawing a ton of fouls (5.7 per 40 minutes).

There very few — if any — college defenders that can handle him individual. He poses unique problems for a team like NC State, which switches 1-4, and doesn’t have a player on the roster (sans Manny Bates) capable of both moving with Banchero in space and also standing up to this power at the rim.

On this possession, Duke runs ball screen action out of a Horns set, which NC State initially switches — putting the 6-foot, 175-pound Breon Pass on Banchero, who immediately heads to the post. Jericole Hellems floats down and tries to kick out Pass; however, as NC State scrambles to match up, Banchero reverse dribbles, scans the floor and spies Wendell Moore Jr. on the weak side.

Duke played lineups with Banchero as the de facto center for only three minutes on Saturday. For the most part, the Blue Devils got a lot of production from centers Mark Williams and Theo John, who combined for 29 points, 13 rebounds and nine blocks.

Williams overextended himself defensively a few times early in the game. With that said, Williams was excellent: eight blocks, six offensive rebounds and four dunks.

Powered by a top-20 offense, North Carolina is now 4-1 in ACC play this season — after a 23-point blowout victory over Georgia Tech on Saturday. In all four of those wins, the Tar Heels scored better than 1.1 points per possession.

As usual, Armando Bacot was awesome: 29 points (6 dunks), 12 rebounds and 9-of-9 shooting from the foul line vs. the Yellow Jackets.

Bacot has continued to flash bits of short-roll passing and back-line rim protection (4.7 percent block rate); however, he’s at his best while pounding opponent on the low block and offensive glass.

Among players with 50+ possessions, Bacot leads the nation in post-up efficiency: 1.26 points per possession (66.1 FG%), according to Synergy Sports.

Here, on this possession, Bacot goes to work in the post off a Floppy set from North Carolina.

For the season, the Tar Heels are +188 in 470 minutes with Bacot on the floor, per Pivot Analysis. This includes a net rating of +24.1 points per 100 possessions. With Bacot on the bench this season, North Carolina has been outscored by 42 points in 170 minutes.

Wake Forest basketball is getting to exercise a lot of demons this season; Saturday’s win at Virginia was the program’s first victory in Charlottesville since 2010, which took place during Tony Bennett’s first season at UVA.

The Demon Deacons shook off a subpar offensive game from Alondes Williams — eight turnovers, 0-of-3 3PA — who had his hands full with Virginia’s defensive stopper Reece Beekman. Wake Forest still managed to score 1.07 points per possession and outpaced UVA with a 23-8 run over the final 10 minutes.

With Jake LaRavia and Isaiah Mucius, Wake Forest has multiple 6-foot-8 forwards that can shoot and attack. That roster development tends to fly under the radar; those two can really pose problems for opponents with their size and playmaking capabilities. LaRavia, especially, is an excellent passer.

Mucius continues to absolutely bomb 3-pointers for Wake Forest, too. The senior forward is shooting 38.1 percent from deep this season — on incredible volume.

Overall, 78.5 percent of his attempts from the floor this season have come from beyond the arc. During his first three seasons in Winston-Salem, Mucius posted a 3-point attempt rate of only 33.8 percent.

It’s obvious that Steve Forbes has empowered each individual player on his roster. For instance, Williams has been given incredible creative freedom that fling passes all over the floor this season. This feels true for Mucius, too, who has been given the green light as a catch-and-shoot ace.

Last week was a quiet one for the Hurricanes, who lost their only game: 65-64 to Florida State. During the FSU game, Miami turned the ball over on 17.7 percent of its possessions — the second-worst single-game number for a turnover-adverse Hurricanes team all season.

Don’t look now, but Florida State is 4-2 in ACC play, following three straight victories, including a road win over the weekend at Syracuse.

Leonard Hamilton’s crew had one of its best offensive performances this season at the Carrier Dome — draining 12 3-pointers and scoring 1.20 points per possession.

Caleb hits the three heading into a timeout!

Once again, Caleb Mills was a catalyst: 19 points, five assists and five 3-pointers. Mills has been terrific now in both matchups with Syracuse this season.

Over the weekend, Notre Dame lost for the first time since Dec. 18, falling at Virginia Tech, 78-73.

Down in Blacksburg, Notre Dame roared out to a fast start; the Irish used their continuity ball screen offense to move Virginia Tech’s defense and target Paul Atkinson in the paint.

Despite the loss, Mike Brey got yet another outstanding performance from senior wing Dane Goodwin: 15 points and three 3-pointers. Here, Goodwin comes off a pindown in one of Notre Dame’s Floppy sets and sticks a jumper.

For the season, Goodwin is shooting 45.7 percent on his 3-points attempts, a top-75 number nationally per KenPom, and 93.9 percent from the foul line.

Goodwin now has 244 points this season on 179 field goal attempts, which is remarkably efficient for a player that makes his mark as a jump shooter.

Historically speaking, Virginia has been an excellent defensive rebounding program under Tony Bennett. That’s one of the hidden keys of the Pack Line’s success: gap defenses must be able to clean the glass and close possessions.

This season, however, that’s not happening. Currently, opponents have rebounded 30.7 percent of their misses this year vs. Virginia, which is well above Bennett’s standard.

The worst defensive rebounding percentage of any UVA team under Bennett came way back in his first season: 72.4 percent. Now, that number hovers at 69.3 percent.

Some of those offensive rebounds late in the game led to some costly put-back opportunities for Wake Forest, too.

If you’re selling stock in Virginia Tech, I’d like to buy. There are some real reasons for concern with Mike Young’s club; however, there’s still lots of talent and the pieces fit together on offense that’s mostly underperformed, so far. There may be some (good) regression on the horizon.

The Hokies are the upside play of the league. If any team has a chance to course correct and get hot, it’s Virginia Tech.

The mentality is still good in Blacksburg. Beating Notre Dame should be another nice confidence boost; it certainly doesn’t hurt that Nahiem Alleyne finally got rolling (22 points, 4-of-5 3PA).

Man, this offense is moving in the wrong direction. Despite some reasons for optimism, Louisville’s struggled this season to generate efficient, flowing offense. Saturday’s loss to Pittsburgh may be the nadir, though.

The Cards missed 21 3-point attempts, attempted only 11 free throws and scored a measly 0.78 points per possession. In the end, Louisville put up just 53 points and lost to Pitt by 12. So, yeah, not great.

That’s certainly not the response the fan base wanted to see after the midweek loss to NC State.

NC State is an imperfect team, but Kevin Keatts has this roster playing hard and playing together. This team’s connectivity was evident in both games last week.

First, NC State put together one of its finest offensive performances of the season — crushing Louisville by 16 points, behind 24 points and six 3-pointers from Terquavion Smith.

Seriously, the Dereon Seabron-to-Baby T combination is one of the best slash-and-kick duos in the country.

Second, undermanned NC State had every opportunity to throw in the towel on Saturday at Duke. Ernest Ross wasn’t playing, which was a big loss. The Blue Devils were Icing ball screens vs. Seabron, and doing whatever it took to make life tough for NC State’s star creator.

Instead, the Wolfpack battled against a team of future first round draft picks and made that game interesting. A big reason for that: NC State went to work on the offensive glass, rebounding 49 percent of its missed attempts.

After the offense no-showed up in South Bend, Clemson got off to a strong start vs. Boston College. However, the Tigers put together an ugly showing in the second half: 29 total points, 0.84 points per possession.

This isn’t a very good defensive team for Brad Brownell. To be successful, they need the offense to click.

Can Clemson rebound vs. Syracuse and the zone?

Syracuse split last week — with a win over Pitt and the loss to Florida State. There were, however, some encouraging Buddy Boeheim minutes, who played every second of both games and combined to score 42 points while shooting 7-of-14 from downtown.

Over the last month, Jamarius Burton has come on strong for Pittsburgh. The Texas Tech transfer is playing heavy minutes, while taking on a large playmaking role. Burton was excellent in Pitt’s upset win over Louisville, scoring 20 points (8-of-12 2PA) and kicking out four assists.

Give Boston College some props. Prior to matching up with Clemson, the Eagles hadn’t won a game in over a month. However, Earl Grant’s squad went to work on defense vs. a good Clemson offense.

This was a big-time defensive performance from Leaky Black.

He averages 20.9 PPG against all other teams.

That is a credit to Leaky Black and the Tar Heels defense.

Read More on Teams in the ACC Power Rankings