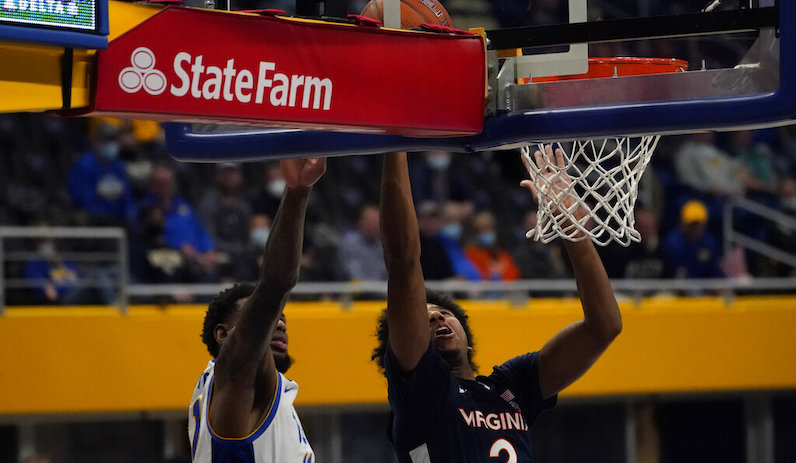 Virginia's Reece Beekman (2) scores against Pittsburgh during the second half of an NCAA college basketball game, Wednesday, Jan. 19, 2022, in Pittsburgh. (AP Photo/Keith Srakocic)

Prior to the start of the 2021-22 season, I wrote a lengthy breakdown on the play of Virginia point guard Reece Beekman. During his freshman year, Beekman established himself as arguably the best perimeter defender in the ACC and one of the top on-ball defenders in the country.

The more obvious questions centered on Beekman’s offense. As a freshman, Beekman had flashes; however, he was mostly a lightly-used secondary creator and transition player.

Beekman’s development on this end will have a massive impact on Virginia — starting with the remainder of this season — and his outlook as an NBA prospect.

A Lack Of Stretch

With Trey Murphy III, Jay Huff and Sam Hauser departing, Virginia’s offense was destined to regress. Those three guys weren’t just efficient scorers; the trio served as the team’s offensive identity last year. That roster had its limitation, including a lack of rim pressure and the ability to draw fouls. However, having three tall shooters who space the floor and can run off screens is pretty awesome, too.

Unsurprisingly, Virginia’s offense has struggled this season. There’s a dearth of perimeter shooting; UVA ranks outside the top 240 nationally in 3-point percentage (31.9 3P%) and 3-point attempt rate (33.1 percent). The Cavaliers rank in the 33rd percentile nationally in spot-up efficiency, too: 0.87 points per possession.

Far too often, the offense spins in circles as Blocker Mover/Sides actions turn into an endless series of pindowns and flares — before a tough, late-clock shot is hoisted.

Virginia no longer has an elite rim-runner, like Huff, on the roster, although Kadin Shedrick continues to make strides: 21 dunks (68.2 FG% at the rim). Shedrick is getting pretty good at diving to the rim after empty-side pindowns in Blocker Mover.

However, the lack of half-court spacing and pull-up shooting cramp the paint and make running normal spread pick-and-roll an arduous task, at times.

ECU transfer Jayden Gardner has been very good this season: 14.0 points per game and 48 percent shooting on post-up attempts, per Synergy.

Gardner is the team’s primary hub for offense; he leads Virginia with 26.9 percent usage rate. Similar to Hauser, Gardner’s an excellent midrange shooter. He’s especially fond of facing up and looking for his jumper in Sides — after screening and ducking in.

That’s a really nice pice to have for an offense; however, there’s only so much juice that can be squeezed for an offense that’s centered around a high-volume post-up/midrange shooter.

When Virginia plays its base lineups — with Gardner and either Shedrick or Francisco Caffaro — they have at least two non-shooters on the court. (That’s also being generous to Virginia’s perimeter guys, who have their own issues from beyond the arc, too.)

Tony Bennett has tried to downsize and play Gardner at center. In these looks, Taine Murray, Igor Milicic or Kody Stattman serve as the de facto stretch-4. Those lineups just haven’t hit, though. According to Pivot Analysis, Virginia is -1 in 56 minutes with Gardner on and Shedrick/Caffaro both on the bench — with an offensive rating of 91.4 points per 100 possessions.

Armaan Franklin is a solid two-way fit in Virignia’s system. On offense, he’s wonderful curling to his right off pindown screens in Blocker Mover.

However, Franklin’s overburdened as the team’s primary movement shooter. He isn’t Kyle Guy or Ty Jerome.

Plus, Franklin’s had a bit of bad shooting luck. Franklin and Alabama’s Jahvon Quinerly, a former UVA target, are the only two high-major players this season shooting under 25 percent from beyond the arc — on 80+ attempts.

(Franklin has been excellent in the midrange, though: 55.2 percent.)

Recent Play: Up And Away

In recent weeks, Beekman’s confidence has grown, along with his play. Back in December, Beekman scored a career-best 20 points, while hitting 3-of-5 3-point attempts. (These were single-game career highs in both makes and attempts from deep).

This isn’t a vintage Brad Brownell defense; however, Beekman drove the ball hard. The sophomore point guard got downhill in the half court and attacked the basket: 3-of-4 at the rim, one dunk, 3-of-4 free throw attempts.

He may not be Johnny Davis, but Beekman can reject a ball screen and get north-south.

Beekman even showed a little craft on this gorgeous finish: snaking the ball screen, then finishing reverse with his inside hand.

Beekman obviously needs to improve as a shooter, although he’s looking more comfortable shooting from a standstill. According to Synergy, Beekman’s spot-up effective shooting percentage is just north of 43 percent. That’s not amazing, but it shows progress.

Beyond the jumper, though, rim pressure should be the name of the game. This is one of the reasons why it was important for Beekman to add some muscle over the offseason; it helps absorb contact when attacking the basket. That must continue moving forward. (It will also amplify his already tenacious point-of-attack defense.)

While he may not be the most explosive driver, there’s zero load time with Beekman’s first step. He shifts from static to top speed in a blink.

Passing Portfolio: One Sets Up The Other

Beekman is shooting just above 61 percent at the rim this season. That’s up from 48.3 percent as a freshman.

Of course, Beekman gets plenty rim looks in transition; he’s the most dangerous steal-and-score threat in the ACC.

Isolated for just half-court rim attempts, Beekman is shoot 52.5 percent, according to Synergy Sports. That’s up from 42 percent his freshman season.

So, as Beekman works with increased usage and responsibilities he’s made strides around the cup. He’s also doing this inside of an offense that’s unable to space the floor like it did a season ago.

When Beekman drives the basketball, it forces extra defensive attention, which can open things up for his teammates, especially Gardner.

He’s even shown added touch on his pocket passes, which is a huge piece of his development.

As Beekman continues to improve as a primary ball handler, the next step will be flinging these types of pocket and skip passes with his left hand.

Of course, Beekman is still doing all of his usual brilliant, savvy playmaking out of Virginia’s Blocker Mover offense, too.

All of this goes into why the win over Pittsburgh was so significant. Similar to the first matchup with Clemson, Beekman drained 3-of-5 3-point attempts. He finished with a team-high 19 points, eight assists, two steals and one block.

As usual, Beekman was aggressive curling around down screens and looking for offense.

This was a higher-usage outing for Beekman: 21.5 percent. It’s just the fifth time this season he’s gone above 20 percent usage in a game.

Beekman spent the previous three games matched up with some of the top guards in the ACC: Caleb Love and RJ Davis (UNC), Hunter Cattoor (Virginia Tech) and Alondes Williams (Wake Forest). There’s no one else in the league that could’ve done what Beekman did in back-to-back games vs. Cattoor — an elite movement shooter — and Williams, a nitrous-boosted downhill driver.

(His reputation is that of an elite on-ball defender, but Beekman put on a clinic in the VT win, chasing Cattoor around a hall-of-mirrors in Mike Young’s offense.)

Without those types of defensive obligations, Beekman went to work vs. Pitt.

All three of his 3-pointers came off the catch — from post kick-outs: two courtesy of Gardner, another from Caffaro.

Beekman didn’t attempt a free throw; he’s still drawing just 1.8 fouls per 40 minutes, which is slightly concerning. Up at Pittsburgh, though, he went 5-of-5 on attempts at the rim.

Beekman also used his dribble-penetration to create looks at the rim for others.

Even more encouraging: Beekman was willing to reject screens, touch the paint, while driving to his left, and look for open teammates.

Throughout this season, Bennett and his staff have tried to add little wrinkles to the screen-roll game. This has all been done in an effort to generate more downhill drives.

One of those methods has been this Pitch 1-2 action into a ball screen. Kihei Clark will start with the ball on the right side of the floor and drive left, while Beekman — who can struggle driving to his left — sprints to his right and in the direction of Clark.

Beekamn will then take a pitch from Clark and hit the jets into a ball screen from Gardner.

To close the first half out vs. Virginia Tech, UVA ran the same action but to the opposite side of the floor; this time, Beekman turned the corner and forced Keve Aluma to help off the strong-side corner, which opened Gardner up for a 3-point look.

It’s not exactly splitting the atom, but running empty-corner pick-and-roll is another way to simplify reads and limit potential help defenders.

This is something that Virginia’s mixed in, too.

During the win at Pitt, the Cavaliers repeatedly dialed up empty-corner looks or flowed into empty-side actions from their spread screen-roll offense.

When the Panthers covered up the roll, Beekman took the ball further into the paint and kicked out. On this after timeout (ATO) look: Onyebuchi Ezeakudo jumps to the ball, Clark relocates and Beekman hits him for an open 3.

Virginia also used these empty-corner sets to circle the ball around and run offense through the post with Caffaro.

Beekman won’t be able to summon this performance in every game; there’s still a ways to go. With that said, he’s Virginia’s game-breaker and a possible ceiling-raiser on offense. (It’d also help if Franklin started to hit from deep.)

As of right now, Reece Beekman doesn’t shoot it well enough, nor does he have the total ball-handling package, to be a primary guy on the next level. If he makes additional strides here in the next few years, then the conversation can change.

However, even if Beekman never makes The Big Leap, there still could be a place for him on an NBA roster. His defensive potential is that special.

Beekman is currently the only Division I player in the country with 3.0 percent block rate, 4.0 percent steal rate and 25 percent assist rate. Going through Bart Torvik’s database, which goes back to the 2007-08 season, only six players have finished a season with these statistical benchmarks.

Along with former NBA standout Jeremy Lin, there are two current NBA players on this list — one of whom serves as an interesting analog for Beekman: Alex Caruso.

Reece Beekman: currently the only player in the country with 3% block, 4% steal, 25% assist rate

Since 07-08 season, only 6 players have finished with these benchmarks, including Alex Caruso (!), Jeremy Lin and Delon Wright https://t.co/XgLJ4dK3JX

Caruso is a self-made player, who has turned into a high-level role player and one of the top perimeter defenders in the NBA. His play helped LeBron James win an NBA title in 2020 with the Los Angeles Lakers. This season, he’s been a defensive catalyst for the upstart Chicago Bulls, currently the No. 1 team in the East Conference.

Caruso isn’t an elite shooter, but he hits enough 3-pointers. He also makes plays as a cutter and ball-mover. Bottom line: he does enough good on offense to keep him on the floor in leverage minutes for his handiwork as a defender and a guy who makes winning plays.

One day, Beekman may get there, too. For now, though, NC State and a date with Dereon Seabron are on the horizon.