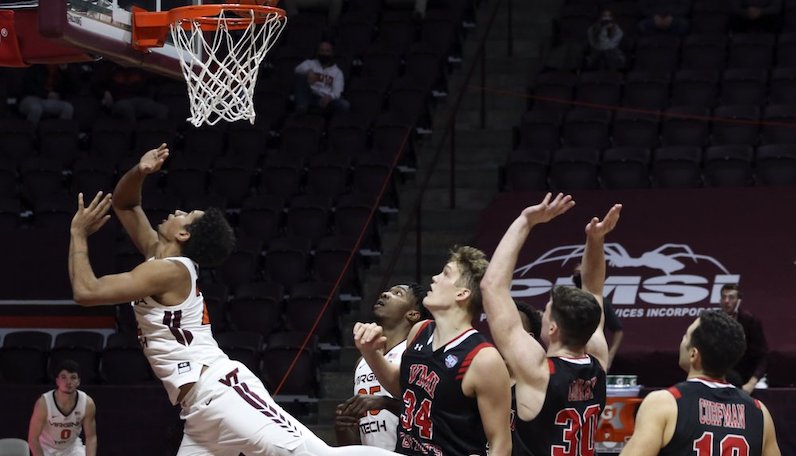 Some of the best players in the ACC this year are immediately-eligible transfers. Carlik Jones has been an offensive bulldozer and pick-and-roll wizard at Louisville. Syracuse’s Alan Griffin is a power wing that can score on and off the basketball. Spot-up ace Trey Murphy III at Virginia ranks top 10 nationally in both effective shooting rate (72 eFG%) and true shooting (73.4 TS%). There are too many to name, honestly.

Another influx of talent into the league has come in the form of transfers that were forced to sit out during the 2019-20 season due to NCAA eligibility rules. (Obviously, all of those eligibility stipulations were wiped clean for the 2020-21 season, amidst COVID-19.)

These guys aren’t necessarily newcomers when it comes to ACC basketball, but the start of this season marked their first game action in over a calendar year. Despite that layoff, it’s been an impressive showing from a handful of sit-out players, starting with Sam Hauser and Keve Aluma.

After a choppy start to the season for Virginia, which included some uneasy interruptions due to COVID-19, the Cavaliers appear to have found footing — winners of five straight, top 10 nationally in both offense and defense.

This year’s Virginia team won’t enter the pantheon of great Tony Bennett defenses; Hauser has struggled on that end at times, too. However, there’s a chance for this team to go down as one of the better offenses Bennett’s coached, while also being damn good defensively, too.

To approach that offensive ceiling, though, Hauser must continue to do what he does best: shoot the hell out of the ball.

Hauser has ripped nets from every level on the floor, so far. He’s shooting 37.5 percent on 3-point looks, and 60.5 percent on long 2-point attempts.

At 6-foot-8, with a high release, Hauser’s midrange face-up game has been devastating. According to Synergy Sports, Hauser has scored 1.33 points per post-up possession (66.7 FG%), which is a top five number nationally (20+ possessions).

Virginia can also utilize inside triangle for Sam Hauser, similar to Hunter in 18-19. Midrange game is a little methodical, doesn't get to the line much, but it's another source of easy offense. Can generate those scenarios out of blocker-mover and continuity ball screen, too. pic.twitter.com/I5XmP2CORH

Before the season started, I mentioned how Virginia could utilize Hauser in a variety actions, including inside triangle/middle third sets. In theory, those designs would help open up Hauser’s midrange attack.

Since the Dec. 30 win at Notre Dame, Virginia has leaned heavily on inside motion designs, while mixing in a fair amount of spread pick-and-roll as well. By leveraging the shooting gravity of Jay Huff — who is having an incredible season, by the way — and Hauser, UVA is able to reliably create half-court advantage. There aren’t too many college teams with two movement shooters that size — three if you count Murphy as well.

It becomes really hard for opposing defenses to hold steady when they start screening for one another; some defender is going to make a mistake rotating around, as Hauser and Huff slip into space on the block or above the arc. Most opponents just aren’t equipped to handle that type of activity.

The five-man lineup of Kihei Clark, Reece Beekman (he’s so good), Murphy, Hauser and Huff, which has started the last four games for UVA, is +51 in 69 minutes, going back to the first Notre Dame game. Overall, that lineup has scored 1.38 points per possession over the last five games (+52.8 net rating), according to Pivot Analyis.

(As it turns out, playing a bunch of tall guys together who are very good at shooting 3-pointers has proven to be a sound bit of basketball strategy. Who would’ve thought that?)

When UVA shifts to its spread ball screen offense, Hauser and Huff are central to the action, once more. This is an abysmal defensive possession for Notre Dame, including some stinky weak-side defense from Prentiss Hubb, but as Huff screens and dives, Hauser lifts up from the baseline, taking 6-foot-10 Nate Laszewski with him. The result is an open slam for Huff, who is up to 22 dunks in 11 games this season.

Virginia, however, can invert those roles and produce easy offense in the middle of the floor. From the Kent State game: Hauser fakes like he’s going to set a wedge screen for Huff, then raises up to set a ball screen for Clark and pops out for a catch-and-shoot 3, while Huff remains in the dunker spot.

Huff has a 24.1 percent usage rate, with only 19 free throw attempts. As a team, Virginia ranks 340th nationally with a paltry free throw attempt rate of 21.8 percent. During the Bennett era, UVA has rarely been a team that gets to the line with much frequency. However, that percentage would go down as the lowest ever for any Bennett-coached team — dating back to his time at Washington State, too.

This team could be an interesting case study in terms of offensive performance when the two primary finishers rarely get to the line for easy points.

If you saw Keve Aluma play at Wofford, you presumably had a good idea as to what Virginia Tech added when he chose to follow Mike Young to Blacksburg. As soon as Aluma steps on the floor, he provides sturdy off-ball screening — a must-have in Young’s brainy offense — and rebounding.

Tyrece Radford has been better shooting off the dribble this season as well — some credit must go to Virginia Tech's player development for stuff like this. Look how good Keve Aluma has been, too. https://t.co/4q3otr0B4F

Aluma, however, transformed parts of his game; he’s a more complete offensive player now, following his redshirt year. His usage is way up (27 percent), and he’s looked to shoot from deep far more frequently (9-of-30 3PA).

The Hokies have responded to these developments by reorienting parts of their offense around Aluma’s post game.

Virginia Tech uses a variety of designs and actions to generate post touches for Aluma. Primarily, though, the Hokies like to empty out a side for a Aluma. When opponents front those looks, Aluma can use his strength — and VT’s spacing — to create passing angles on the back side.

Some of these post-up actions are more deliberate, though. The ball is entered to Aluma, everyone spaces out and he backs down his matchup. If a double team arrives, Aluma can kick out, pass big-to-big (Aluma and Justyn Mutts have nice post passing chemistry) or look to split.

Of course, there are quick-hitting post actions in Young’s playbook as well: cross screens along the baseline or a straight duck-in.

According to Synergy Sports, Aluma is shooting 46.2 percent on post-up attempts this season, scoring 0.88 points per possession.

Aluma’s assist numbers are up slightly, too: 1.9 assists per 40 minutes. Virginia Tech has scored over 1.06 points per possession when Aluma’s passed out of the post to a teammate that’s finished the possession.

With Aamir Simms as a high-post passing hub, Clemson arranges its offense differently from every other team in the ACC. Simms is a crafty passer, capable of creating offense in the short roll or spacing out in pick-and-pop action. Simms is a wonderful offensive player, but Fordham transfer Nick Honor has added a necessary dash of perimeter playmaking for the Tigers.

Honor has shot lights out this season, too: 26-of-39 on 3-point attempts (44.1 3P%). According to Synergy, Honor has an effective shooting rate of 61.8 percent on catch-and-shoot attempts. From Clemson’s 5-out look: watch Honor wisely relocate to the corner when Dawes drives in his direction, behind the overplay/denial of Anthony Polite.

Movement attributes are a real asset in an offense that needs this type of off-ball activity around Simms in the middle of the floor.

From the Virginia game: Simms draws gravity as a pick-and-pop threat with a hard stunt from Clark. Rather than standing still, however, Honor cuts behind Clark; Dawes hits him for the floater over Hauser.

At 5-foot-10, Honor is a smaller guard, but he compensates for that with his stocky frame (205 pounds) and fearless play. So far, he’s connected on 50 percent of his 2-point attempts, including 66.7 FG% at the rim.

Honor misses the running layup on this possession (Clemson’s Chin series), but this is excellent second-side pick-and-roll action: pindown, flip, screen-roll with Simms.

Defensively, Honor has been a stud. Honor, who boasts a four percent steal rate (No. 64 nationally), is one of only four Division I players, under 6-foot, with a defensive box plus-mins of 3+ this season.

Following two seasons at Nebraska, plus his sit-out year, Thomas Allen has been a snug fit in NC State’s system, as expected. Similar to his time in Lincoln, Allen is a lower-usage player: 14.8 percent usage (only 7 FTA), which is tiny. That’s perfectly fine, though, while playing next to ball-handlers Devon Daniels, Shakeel Moore, Cam Hayes and Braxton Beverly; the Raleigh native is a necessary half-court spacing agent.

Allen’s role is straightforward: shoot 3s and defend. With nearly 59 percent of his field goal attempts coming from beyond the arc, Allen is a sizzling 19-of-37 on 3-point looks (51.4 3P%). Allen is primarily a spot-up threat (1.25 points per spot-up possession); however, five of his 19 3-pointers have come unassisted this season. He has some on-ball creation.

NC State will move Allen around some in its half-court offense, too. Occasionally, he runs some side ball screens out of the Pack’s 1-4 high Iverson sets, though those sets are usually generated for Daniels. Allen can also be utilized as the second screener/back screener when NC State runs Spain pick-and-roll.

He may look unassuming on the defensive end, but Allen is rather adept at getting skinny in ball screen coverage — going over the top of the screen while Manny Bates drops.

Allen currently averages 2.2 steals per 40 minutes; he’s the only player in the ACC shooting above 45 percent on his 3-point attempts, with a three percent steal rate, too.

While Nysier Brooks has struggled some offensively this season, he’s added to Miami’s rotation with defensive intensity and production on the glass. Brooks is blocking shots less frequently than he did at Cincinnati (8.4 percent block rate in 2018-19), but he’s still giving Miami some punch on the back line: 4.1 percent block rate.

Injuries have been a major factor for the Hurricanes, but there are so many gifted creators and pick-and-roll threats on this roster — led by Isaiah Wong. Brooks will have plenty of opportunities at the rim, just by screening hard and diving to the hoop.

Over Miami’s last five games, Brooks has eight dunks, including this catch-and-spike against Louisville, following Horns Twist action for Wong.

Pitt’s offense is powered by its own Big 3. Justin Champagnie is this team’s talisman; there’s nothing he can’t do, on either end of the floor. Xavier Johnson is the go-go engine: 8.6 assists (41.8 percent assist rate) and 8.4 free throw attempts per 40 minutes. Au’Diese Toney is the multi-level finisher: 35.3 percent on 3-point attempts, 56 percent on long 2-point attempts.

To complement those pieces, though, Jeff Capel needs defense, screening and (most importantly) shooting. This is where Ithiel Horton enters the equation.

After shooting 41.1 percent from deep during the 2018-19 season at Delaware, Horton has splashed 35.1 percent of his 3-point attempts with the Panthers.

Horton has an effective shooting rate of 51.3 percent on spot-up no-dribble jump shots, per Synergy.