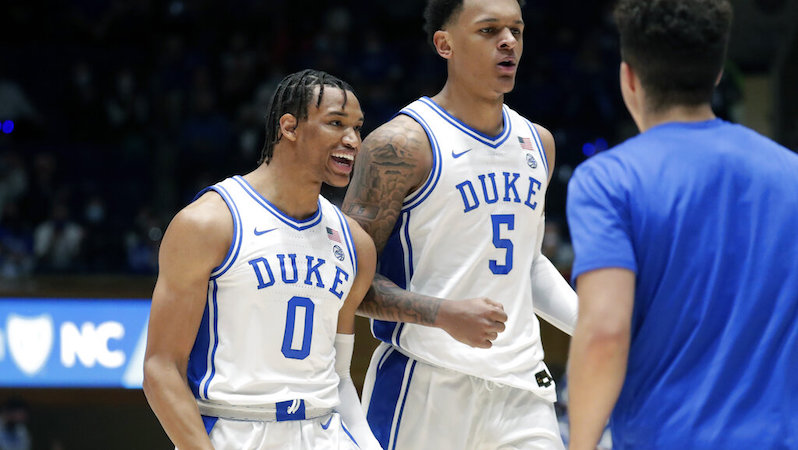 Duke forwards Wendell Moore Jr. (0) and Paolo Banchero (5) celebrate after a good series of plays during the first half of an NCAA college basketball game against Winston-Salem State, Saturday, Oct. 30, 2021, in Durham N.C. (AP Photo/Chris Seward)

The college basketball season started just over a month ago. Full-scale conference play doesn’t really get going for another two weeks. There’s a lot of basketball left to be played. However, as the action gets set to heat up, it’s time for a temperature check on the ACC’s Player of the Year race.

There’s no other talent quite like Banchero in college basketball — a power forward who can flash high-level skill, craft and playmaking feel.

Banchero is a scoring threat from every level of the floor. The Seattle product is shooting 71.4 percent at the rim, 42.5 percent from midrange (71% of midrange FGM are unassisted) and 83.8 percent from the line.

There are some exceptional guards on this roster, but the Blue Devils should consider even more half-court initiation with Banchero.

In terms of various catch-all metrics, Banchero ranks second in the ACC in Evan Miya’s BPR metric, while also inside the top of of the conference in box plus-minus.

The rise of Wendell Moore Jr. — from promising young talent to one of the best guards in the country — has been a joy to take in. Moore’s numbers certainly paint one hell of a picture; however, this goes beyond just his stats.

It’s a delight to watch Moore and take inventory of how far he’s come as a playmaker. Now in his third season with Duke, Moore is a heady decision-maker, a daring transition passer and an explosive half-court finisher.

Moore really has gotten quite good at that fake dribble-handoff/keep maneuver, especially out of Duke’s 21 action with Trevor Keels.

According to Synergy Sports, Moore has scored 1.22 points per pick-and-roll possession (63.3 FG%). When opponents go under the screen and the jumper is open, he’s shooting that with confidence, too.

Currently, Moore is one of only 14 high-major players with a box plus-minus of at least 12. He’s joined in this category by some of the best players/draft prospects in the country, including Iowa’s Keegan Murray, Johnny Davis of Wisconsin, Auburn’s Jabari Smith and Tari Eason of LSU.

Prior to the start of the 2021-22 season, I was bullish on the addition of Alondes Williams to Wake Forest’s roster. He fit a need: a downhill driver to pressure the rim and help open up the offense. However, Williams has played multiple levels above those expectations.

In fact, he’s been one of the best players in the country this season, so far.

Williams and Jake LaRavia have juiced Wake Forest’s now-spacey offense; the Demon Deacons are playing faster, getting to the rim more frequently and generating lots of open 3-pointers.

Built with power and speed, Williams functions as a battering ram for the offense. With the majority of his field goal attempts coming in the paint, Williams is shooting 69 percent around the basket.

All of his dribble penetration forces opposing defenses to bend, which opens things up for Wake Forest’s second-side players. Williams is making excellent decisions as a passer, too.

Williams is currently one of only two high-major players with 27 percent usage, 27 percent assist rate and 60 percent effective shooting. (The only other player is Purdue’s star center Trevion Williams.)

Additionally, Williams ranks second in the ACC in Miya’s Box OBPR metric — behind only Wendell Moore Jr. — and he leads the league in plus-minus (+138).

If you kept up with NC State late last season, you saw Dereon Seabron close his redshirt freshman year in impressive fashion. The wiry 6-foot-7 wing had limitations as a shooter; however, his daring open-floor talents were obvious. That said, most Seabron optimists likely didn’t see this coming.

Seabron is an idiosyncratic player: a high-usage wing that doesn’t really shoot 3-pointers. Instead, he’s a frightening downhill driver, who uses a variety of tricks to slip into gaps or Euro-step around would-be defenders.

According to Bart Torvik’s shot data, over 82 percent of Seabron’s field goal attempts have come on close 2-point shots. This is an absurd number, one that’s fueled by put-back attempts after an offensive rebound and off-ball movements as a cutter.

Through the first month of the season, Seabron ranks second in ACC in point per game, while also leading the conference in rebounds per game. He’s currently one of nine high-major players with 25 percent usage, 9.0 percent offensive rebound rate and 20 percent defensive rebound rate.

Michael Devoe is coming off his worst game of the season — a loss to LSU — but the senior southpaw is in the midst of an excellent stretch of basketball. Despite being at the top of every opponent scouting report, Devoe leads the ACC in scoring, while shooting a ridiculous 53.2 percent on his 3-point looks.

Devoe, one of the top combo guards in the country, isn’t a burner with the basketball; however, he leverages his deep 3-point shooting, passing vision and in-between dribble-drive game to move around the floor and create offense.

According to Synergy Sports, Devoe has an effective shooting rate of 66.7 percent on off-dribble jump shots this season, which ranks No. 1 nationally among players with 30+ attempts.

That number will likely drop at some point this season, but there’s no questioning Devoe’s talents and shooting range.

Best Of The Rest

Louisville’s defense has allowed just 0.88 points per possession with Williams on the floor, according to Pivot Analysis

Duke claims No. 1 spot in this week’s Power Rankings