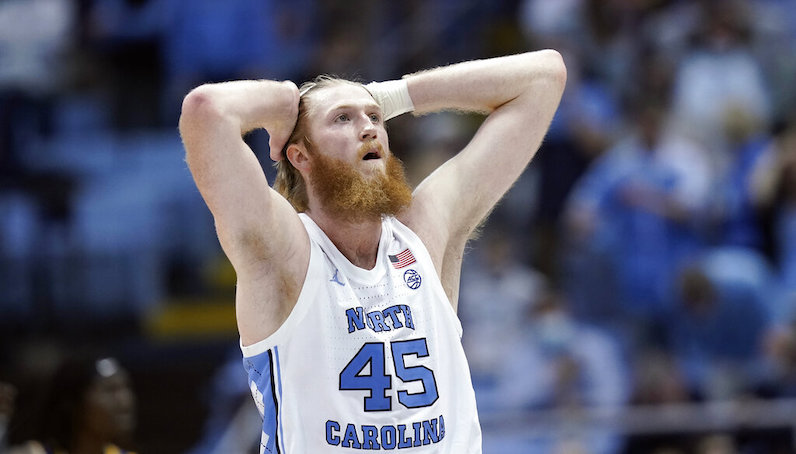 Two steps forward, one step back. North Carolina basketball responded to a blowout home loss to Duke with back-to-back wins over Clemson and Florida State. UNC erupted on offense vs. FSU: 12-of-28 3-point attempts, 1.25 points per possession. For a moment, the Tar Heels could feel good about their standing for the 2022 NCAA Tournament.

The one step back, however, was a big one.

Down 17 points at halftime, North Carolina feel at home to Pittsburgh, arguably the worst team in the ACC, 76-67. After the game, Pitt coach Jeff Capel spoke his mind.

– Jason Capel screaming at me as he leaves the court, Victorious. #GoHeels

North Carolina’s offense dried up; Caleb Love and Brady Manek shot a combined 2-of-13 from beyond the arc, which is a recipe for disaster. Once again, Hubert Davis saw his defense crater, too. The Panthers scored 1.11 points per possession in this game. In terms of efficiency, this is the second-best performance Pitt’s post this season. (1.13 points per possession vs. Virginia Tech, back on Feb. 5.)

Before the game, UNC entered the evening with a solid-yet-imperfect resume:

Here’s an updated look at the resume:

If Davis and UNC are to alter the course, there’s little time to make some big moves, especially after this type of stinky defeat.

Saturday’s matchup in Blacksburg becomes a massive game — for both parties. After that, UNC can’t afford to trip up vs. Louisville, (at) NC State and Syracuse. The regular season finale at Duke is another Quad 1 opportunity. North Carolina will enter that game is a sizable underdog.

The ACC Tournament looms, but that’s a bit of a black box in terms of resume opportunities. However, if UNC could stack a handful of wins between now and the end of the ACC Tournament, that — along with its powerful brand name — could be enough to land on the right side of the bubble.

ACC Power Rankings: Where do the Tar Heels stand?