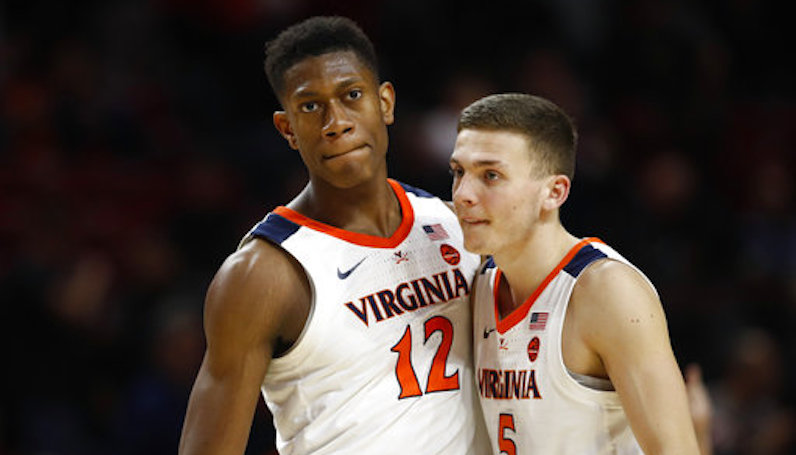 Another week, another set of ACC Basketball Power Rankings. Here’s a look at the landscape of the league after the ACC-Big Ten Challenge resulted in a draw and Wake Forest melted down for its third loss of the young season to a team outside the top 100 in KenPom.

Led by Ty Jerome and Kyle Guy — a combined 35-of-81 on three-point attempts (43.2 3P%) — Virginia has shot 40.8 percent from beyond the arc this season. According to Synergy Sports, UVA has been off the catch this season: 1.2 points per possession (59.5 eFG%) on catch-and-shoot attempts this season.

Now this is just nasty — shoulder fake, one dribble, and he's at the rim, finishing over Fernando (17 blocks in 177 mins this season) pic.twitter.com/8IHc4aUpkZ

Zion Williamson, R.J. Barrett and Cam Reddish get most of the headlines, which is deserved; those guys are awesome at basketball. But Tre Jones is really freaking good, too. Jones has assisted on 27.7 percent of his teammates’ field goal this season while on the floor — nearly 11 per 100 possessions. Also, just look at this pass from the Stetson game on Saturday.

Michigan hit UNC with an avalanche last week. The nation’s top defense was in excellent form against the go-go Tar Heels — holding North Carolina to under one point per possession for the first time this season. Coby White — 0.92 points per possession (46.2 eFG%) on off-dribble jump shots — has been impressive, though.

Much more intelligent scouting/charting out there, however, a few video examples of how Michigan exposed the Tar Heels

Lineups & who starts aside, better question is can this team survive a poor shooting night with this defense? pic.twitter.com/CbvtyI22Ll

We all saw this coming before the season started — Virginia Tech is an excellent three-point shooting team. The Hokies currently rank inside the top five nationally in both three-point percentage (44.9 3P%) and effective shooting (61.4 eFG%). According to Synergy, Tech has scored 1.24 points per possession (66.4 eFG%) on spot-ups this season, which ranks third in the nation.

There’s a lot to like with this Florida State team, which already has two wins over top-25 KenPom teams. The only loss this season was a two-possession defeat against Villanova. Sophomore center Mfiondu Kabengele is doing things, too. Kabengele is averaging 11.1 points per game in only 17.7 minutes of action — 25.2 points per 40 minutes. Part of his efficiency: he draws a ton of fouls — 8.7 per 40 minutes — and makes his free throws (73.7 FT%).

After a shaky middle of November, Syracuse has rebounded; that win at Ohio State is solid. Junior wing Tyus Battle has upped his game. On pick-and-roll and isolation possessions, Battle is shooting 47.1 percent (50e FG%), per Synergy.

After a tough road loss at Wisconsin, NC State bounced back with a neutral-site victory over Vanderbilt — minus Darius Garland. With Markell Johnson pushing the pace — 15.2 second per half-court offensive possession — the Pack has excelled in transition early this season: 1.15 points per possession, according to Synergy. This team is good.

In his second season under @CoachKeattsNCSU, Markell Johnson of @PackMensBball continues to evolve as a dynamic pick-and-roll scorer (66.7 eFG%) and distributor (1.08 points per possession), and the driver of NC State's offense — writes @bgeis_bird https://t.co/km8z4DfWWc pic.twitter.com/FqaMgGBo3y

The state of Nebraska has been cruel recently to Clemson basketball — back-to-back losses to Creighton and Nebraska. In both of those games, Clemson’s defense — which is a good unit — allowed over 1.1 points per possession. KenPom still ranks the Tigers 25th in terms of adjusted defensive efficiency.

With wins over Michigan State and Seton Hall last week, Chris Mack must be proud of his squad. The Cards are doing an outstanding job getting to the line — led by Jordan Nwora (6.1 FTA per game, 8.9 FTA per 40 minutes). Louisville ranks second nationally in free throw attempt rate: 58.9 percent. Nearly 30 percent of Louisville’s total points this season have come from the free throw line.

Through the first seven games of the season, Notre Dame has rebounded 36.4 percent of its own misses. That ranks 27th nationally in terms of offensive rebound rate, and if it held for the whole season, it would be the highest rate of Mike Brey’s tenure in South Bend, per KenPom. That boards have turned into easy offense for the Irish, too. According to Synergy, Notre Dame is shooting 71.9 percent on put-backs this season — No. 1 in the ACC.

Basketball is a make or miss sport; sometimes it’s just that simple. And in the last few games, Miami has missed, like, one two many shots. The Hurricanes have dropped three straight games to Seton Hall, Rutgers and Yale by a combined nine points.

Yale takes down Miami 77-73 in the final game of the Hoophall Invitational. Impressive performance from Yale's Miye Oni with 29 points on 15 shots. Long-armed athletic wing who can make a shot and showed some nice flashes creating and defensively today. pic.twitter.com/p2IwwZpCzf

Pitt’s 7-1 start under Jeff Capel isn’t magic; the Panthers have been pretty darn good on defense. Capel’s club has allowed more than one point per possession in only one game this season. Currently, the Panthers rank No. 68 nationally in adjusted defensive efficiency, per KenPom.

Boston College followed up a nice home win over Minnesota with a so-so victory against Sacred Heart. A big early-season positive for the Eagles: freshman guard Wynston Tabbs. In the win over Sacred Heart, Tabbs — 60.2 true shooting rate, 18.2 percent assist rate — was exceptional.

The last player in the ACC to do so: Ky Bowman #TNMDG#WeAreBC 🦅 pic.twitter.com/MXBLT5zhQU

Georgia Tech had a major opportunity over the weekend in Miami, but a second-half lead evaporated late in the game, and Tech lost to St. John’s, a top-50 KenPom team, 76-73. The Yellow Jackets, normally stout on defense (fifth nationally in opponent effective shooting), allowed 47 second-half points.

Things are not going great in Winston-Salem right now. After a road loss to Richmond, Wake Forest now ranks No. 146 in KenPom, the worst of any ACC program, and No. 233 in NET, the worst of any Power Five program. This is a basketball program at an existential crossroads.