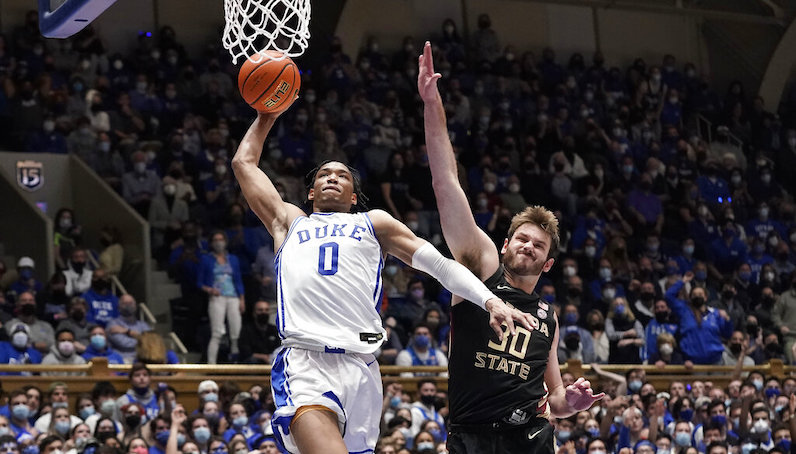 We really are coming down the stretch of the 2021-22 college basketball season; conference tournaments will be in here two weeks. No time to waste. Let’s jump in on this week’s ACC Power Rankings.

Winners of four straight, Duke picked up two Ws last week: a thriller over Wake Forest, then a blowout of Florida State on Saturday. Wendell Moore Jr. was excellent in both victories. \

During the FSU game, Moore posted his second game this season of 15 points, 5.0 assists, 5.0 steals and 5.0 rebounds.

More of the same from Wendell Moore Jr. tonight — the leap looks real. Getting north-south with his handle, using his strength to muscle into gaps, making good decisions, showing confidence with the pull-up, and his transition hit-ahead looks have been quite solid. https://t.co/DmZVNuzVJr

All season long, Moore — one of the top guards in the country — has flashed wonderful vision and timing as a transition passer/connector. The Blue Devils want to run: turn the heat up defensively at the point of attack and get into transition.

Well, on Saturday, Moore had arguably his best hit-ahead pass of the season.

Following a rebound from Theo John, Duke collected the ball with about 30 second remaining the half — time for one more possession. Mike Krzyzewski rose off the bench and, like a third-base coach, signaled for Duke to hit the brakes and save the ball for one last possession. Normally, that’s the correct decision; however, Moore saw an opportunity and he trusted his teammate to make a play. Moore hit AJ Griffin in stride for a transition slam.

Now, this was no ordinary pass; Moore snapped a bounce pass that seemingly covered a third of the floor’s width. The ball caught Griffin in stride and he spiked for his sixth dunk of the season.

It certainly helps to have a player like Griffin running the floor in this situation, but that’s incredible skill and creativity from Moore.

Who knows, this may have been an ode to Tre Jones, his former teammate and a master of the transition bounce pass, who happened to be in attendance for the game.

Wake Forest bounced back from two straight narrow defeats: Miami and Duke. The loss Cameron Indoor is the type of loss that could have a team disappointed and not ready to meet the moment. With Notre Dame in Winston-Salem over the weekend, though, that simply wasn’t the case.

Steve Forbes had his team ready to play, and the Demon Deacons picked up a crucial victory for their NCAA Tournament resume.

There were plenty of heroes for Wake Forest in this game. Jake LaRavia played the full 40 minutes, scored 20 points, dished out five assists and grabbed four steals.

LaRavia continues to emerge as one of the most disruptive help-side defenders in the ACC.

As usual, Alondes Williams was awesome; he scored a team-high 23-points and took over the stretch. Williams has rocket boosters in his legs. It’s incredible how much ground he covers and power is generated with his crossovers and spin moves.

This is a gorgeous finish out of Wake Forest’s Angle ball screen action.

Below the headliners, however, was an impactful two-way performance from veteran big man Khadim Sy. The elder statesman of this Wake Forest roster went for 15 points and 10 rebounds, including six on the offensive glass.

Sy was frisky as a pick-and-roll defender, including some nice possessions as a switch option late in the game.

Once again, Forbes leaned on his jumbo-defensive lineup to close this game out. Dallas Walton has been solid for Wake Forest this season, too.

According to Pivot Analysis, Wake Forest is +42 in 224 minutes with Walton and Sy on the floor together. During those minutes, Wake Forest has a defensive efficiency of 99.6 points per 100 possessions.

When Damari Monsanto plays with Walton and Sy, Wake Forest is +20 in 26 minutes.

Notre Dame dropped a tight one on the road, although the Irish had a chance to tie the game late: Blake Wesley got downhill and kicked to Cormac Ryan for an open corner 3-point look. Ryan, who was excellent for Notre Dame on both sides of the floor, just couldn’t make the shot.

After hitting a bit of a rookie wall, Wesley has caught fire. Over the last three games, Wesley’s averaged 21 points, 6.0 FTA, 3.0 assists and 2.0 steals per game.

Wesley shot 5-of-6 on 3-point attempts at Clemson; he then followed that by draining six more 3-pointers at Wake Forest. He’s shooting with confidence off of movement. Wesley also punished Wake Forest for going under on screens vs. him in the first half.

Opponents can’t take away everything for Wesley, especially with so much secondary offense on the floor for Notre Dame. Defenses would likely prefer to get him out of the paint, which helps take away trips to the free throw line and kick-out passes for spot-up 3-pointers.

However, when Wesley’s (32.9 3P%) doing this in terms of pull-up shooting, man, you just have to tip your cap.

Miami’s 3-game winning streak was snapped at home by Virginia; the Cavaliers outscored the Hurricanes by 11 in the second half and won in exciting, comeback fashion.

Isaiah Wong had — for him — are rare off-night: 10 points on 11 field goal attempts. Virginia’s Reece Beekman continues to give him trouble. There isn’t a player in the ACC that bothers Wong more than Beekman.

During his three-year career, Wong has shot just 26.3 percent from the floor vs. Virginia, the lowest of any ACC opponent.

This was, however, another rock-solid performance from forward Jordan Miller: 15 points (7-of-11 2PA), one steal and one block.

The George Mason transfer finds ways to add value as a secondary target for Miami’s offense, which ranks top 20 nationally in adjusted efficiency, while creating chaos as an excellent help-side defender.

North Carolina (11-5 ACC) went down into the mud to unearth a much-needed win at Virginia Tech, 65-57. The victory helps shake off a frustrating mid-week loss to Pittsburgh.

Virginia’s win over Miami is memorable not only for how the Cavaliers raced back to win in the second half; during the game, Kihei Clark became the 50th player in program history to eclipse 1,000 career points.

Clark was aggressive looking for his shot in this game. He pumped in 17 points and drained three 3-pointers, all of which were assisted by Beekman.

You know Clark is feeling especially good, though, when he’s relocating and sprinting hard off Blocker Mover pindowns, looking for his 3-point jumper.

When those shots start falling, Clark adds some critical breathing room for Virginia’s half-court offense, which allows Jayden Gardner to go to work, with a little more space. Gardner finished with a game-high 23 points at Miami.

The East Carolina transfer is super good at presenting himself as a target within the flow of the offense. Gardner’s excellent as a duck-in/post-up hub off pindowns or operating at the elbows/nail area.

The Hokies took a six-game winning streak into the weekend; however, after the loss to the Tar Heels, the NCAA Tournament may have slipped away.

This is a really good basketball team, but some closes loses this season will likely lower its overall ceiling.

With a week off in between games, Syracuse returned to the floor and dominated Boston College, winning 76-56 at the Carrier Dome. Syracuse controlled this game start to finish; Cole Swider led the way with 18 points (3-of-5 3PA).

Jimmy Boeheim posted a double-double, too: 13 points and 10 rebounds.

It’s a gigantic bummer to see how injuries have derailed Florida State’s 2021-22 season. However, this is a Leonard Hamilton-led enterprise; FSU’s culture is as good as any program in the country.

Like a lot of freshman point guards, Jalen Warley has struggled with his jumper (38.6 eFG%) and battled turnovers (23.9 TOV%). His performance at Duke, though, is one for the former blue-chip recruit to build on.

Warley went for a career-best 15 points (4-of-7 FGA at the rim), while kicking out six assists and snagging seven rebounds, also a career high.

With his size (6-foot-6), passing vision and downhill drive game, Warley is an intriguing guard prospect for the 2023 NBA Draft.

It’ll be fascinating to see what Warley, Matthew Cleveland and John Butler decided to do with regard to the draft. Assuming that trio returns, or at least two of the three (Warley and Butler?) come back, then Florida State looms as a dangerous bounce-back team in 2022-23.

Louisville went a month in between wins. That’s not much fun to go through.

The Cards took down Clemson on Saturday, which also served as the program’s first win since Chris Mack was fired. In that span of time, Malik Williams was suspended for multiple games and returned to the lineup. Man…it’s been a long season.

MIKE PEGUES on the team's "come to Jesus" meeting after its loss to Miami . . . pic.twitter.com/yonVh7Tdsj

The Clemson victory mirrored a nice game for Noah Locke, who drained three 3-pointers and scored 15 points. Locke is shooting just under 40 percent from beyond the arc in league play.

Star forward/center PJ Hall, one of the top players in the ACC, left Clemson’s game vs. Louisville after playing only one minute. Hall has battled a foot injury all season; however, X-rays taken Monday morning were negative.

Brad Brownell says there's not much to update on PJ Hall's status other than an X-ray being negative (so that's good news for Clemson).

Wake Forest is at Clemson on Wednesday night; Hall left Saturday's game with a foot injury.

Hall (48.9 FG%) leads Clemson with a scoring average of 15.5 points per game. It’s been a gutsy effort this season.

The Eagles haven’t won a game in the month of February, but Boston College’s last victory came over Pittsburgh (Jan. 30). Boston College still rates slightly ahead of Pittsburgh and Georgia Tech, according to KenPom’s adjusted efficiency metric, too.

During February, BC also played pretty well vs. Duke and took Notre Dame to overtime.

Mouhamadou Gueye had a nice game vs. Georgia Tech: 27 points and 12 rebounds. However, Gueye and Pitt fell just short at home to the Yellow Jackets, despite a late rally. Pitt outscored GT 24-14 over the final 10 minutes.

As NC State blew the doors off Georgia Tech in Atlanta, freshman guard Terquavion Smith put forth another masterful performance. Smith went for 26 points on only 13 field goal attempts, including a 6-of-8 night from beyond the arc.

Here, Smith comes across the Iverson screens and rhythms right into a catch-and-shoot/movement 3-pointer, thanks in part to some awful chase defense from Jordan Usher.

Going back to the 1992-93 season, only 11 ACC freshmen have hit this benchmark. This list includes some rather impressive names: Gary Trent Jr., JJ Redick, Cam Reddish, Brandon Ingram, Curtis Staples and Stephon Marbury.

It was also nice to see a good game from Cam Hayes. The sophomore point guard flipped in 14 points to go along with two assists and zero turnovers.

At this point, Dallan “Deebo” Coleman isn’t an every-game contributor, but the freshman shooter is having a nice season.

Coleman is one of six high-major rookies shooting above 40 percent from downtown — with at least 50 3-point attempts. There are some other great names on this list, including AJ Griffin, Jabari Smith, Malaki Branham and Jaeden Zackery.