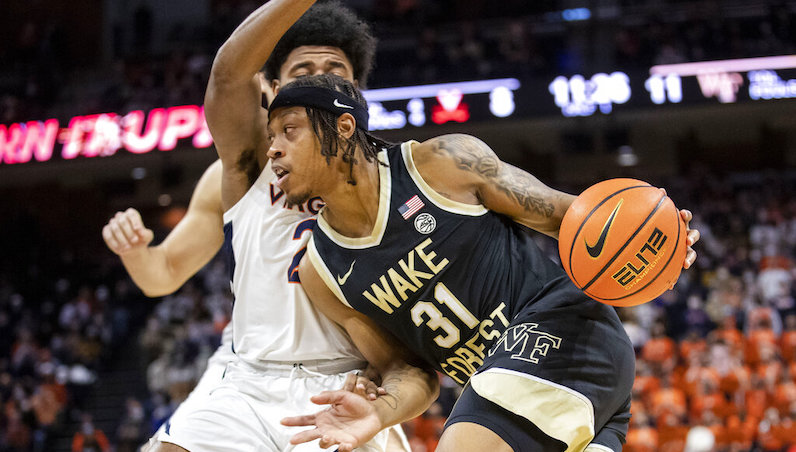 during the first half of an NCAA college basketball game in Charlottesville, Va., Sat, Jan. 15, 2022. (AP Photo/Erin Edgerton)

Alondes Williams has been the engine for Wake Forest’s revival this season. The Demon Deacons are more than a one-man show, to be clear. Jake LaRavia is a versatile playmaker and an All-ACC talent from the forward position. Daivien Williamson has adjusted his play this season — down to 1.3 assists per 40 minutes — to accommodate Williams, but he’s capable of getting his own shot, too.

Off the bench, Carter Whitt and Cameron Hildreth have given the Deacons dashes of offensive initiation as well. However, this team’s success is largely predicated on the creation efforts of Williams.

To his credit, Williams has delivered; all season, he’s carved teams up with his downhill-drive game and a wonderful array of skip passes that leave vapor trails hovering over an opposing defense.

According to Synergy Sports, Williams has scored 0.94 points per isolation possession this season (55.9 FG%). In terms of iso efficiency (50+ possessions), Williams ranks top five in the ACC — among other high-wattage scorers, like Isaiah Wong, Caleb Love, Dereon Seabron and Paolo Banchero.

Power In The Paint: Alondes Williams

Rim pressure is the name of the game for Williams: nearly 55 percent of his field goal attempts are 2-point shot around the basket, according to Bart Torvik’s shot data. Williams has connected on 66.4 percent of those attempts, with 72.5 percent of the makes coming unassisted. (Remember: Williams is a very good cutter, too.)

For the most part, Williams hasn’t had too many off games; he’s been a powerhouse of productivity for the Demon Deacons, save for the LSU. The Tigers rank No. 1 nationally in defensive efficiency. LSU’s size and athleticism bothered Williams: five turnovers, 4-of-11 on 2-point attempts.

However, Williams continued to attack and put together some powerful downhill finishes, including this switch bucket over Alex Fudge, one of the top defensive prospects for the 2022 NBA Draft.

Williams never stopped attacking, although the power guard had the shakiest performance of an otherwise spotless season: eight turnovers, 0-of-3 3PA.

Beekman is an otherworldly defender: elite at the point of attack and a high-level off-ball steals artist who uses his anticipation skills and speed to intercept mid-flight passes.

In terms of pick-and-roll defense, Beekman is excellent with navigating screens — fighting over the top of would-be picks. He’s skinny, but Beekman has a unique ability to glide around screens and stick with his assignment. Beekman also has some of the quickest hands in college hoops.

For the second time in his two-year career, Beekman finished a game vs. Wake Forest with five steals. He also blocked two shots. Beekman, who now has 20 career games of 2+ steals, is one of seven high-major players this season with 2.5 percent block rate and 4.0 percent steal rate.

That constant pressure from Beekman forced Williams to speed up; he played a little out of control, at times.

Be Your Truest Self

This legitimately is one of my favorite possessions from the 2021-22 college basketball season: Williams vs. Beekman.

Wake Forest clears out a side for Williams to go one-on-one vs. Beekman. Williams tries right; Beekman slides and beats him to the spot, which cuts off the lane. Williams crosses over and tries left; it’s the same result, with Beekman closing down the lane. Undeterred, Williams tries to drive further left, then spin back right. Beekman doesn’t allow an inch.

Miraculously, though, as he’s falling away from Beekman and Francisco Caffaro, Williams rips off a cross-court skip pass to Khadim Sy.

I’m not sure how William saw Sy — let alone threw a frozen rope right into Sy’s shooting pocket. But I just love this play; it’s Beekman and Williams being the truest versions of themselves on the basketball court.

Back To The Basket

As the game progressed, Steve Forbes searched for other ways to involve Alondes Williams. The hope for Forbes: attack Beekman without attempting to drive the ball at him.

First, Wake Forest ran its Chin Flare action after a timeout — in the hopes of creating an off-screen/movement 3-pointer for Williams. Beekman, however, is an incredible chase defender, too. He dips under the screen, but is able to scramble, close back out and contest the 3-point attempt.

Later on, Forbes decided to drag the game into the mud: post touches for Williams.

Wake Forest isn’t a heavy post-up offense; the Demon Deacons run a lot more spread ball screen actions and motion. However, four guys on this roster have used at least 20 post-up possessions this season, including Williams.

By throwing the ball into the post, Williams could lean into his power game; he outweighs Beekman by 30 pounds. More importantly, this back-to-the basket approach allowed him to better protect the ball vs. Beekman.

Wake Forest ran five post-up possessions for Williams, the point guard, over the final 15 minutes of this game. On the first possession, true to Pack Line form, Virginia doubled Williams with Caffaro; however, Kihei Clark wasn’t able to get quite low enough on the weak side, while also worried about Williamson as a spot-up shooter.

The result: Williams reverse-spin pass around Beekman and a Dallas Walton dunk.

On the second possession: Armaan Franklin, solid wing defender, catches the post assignment vs. Williams. The Wake Forest star faces up and executes a gorgeous quick spin move and draws a foul at the rim.

Williams has shown throughout the season that he’s capable of flinging cross-court skip passes out of the post, too. That’s exactly what happens here: Williams catches, Kadin Shedrick shows soft help, which forces Kody Stattmann to sag off Isaiah Mucius on the wing. There’s zero processing delay from Williams. Instantly, he skips the ball to Mucius for another 3.

Mucius leads the ACC with 109 spot-up points this season, per Synergy Sports. Among ACC players with 75+ spot-up possessions, Mucius ranks second in terms of efficiency: 1.19 points per spot-up possession, just behind Miami’s Kam McGusty. Williamson ranks third in this category.

The lesson: it certainly pays to spot-up around Williams and LaRavia.

Once again, it’s the unstoppable force and the immovable object meeting; this time, though, it’s for a dance in the post. Williams is able to back Beekman down into the restricted area, but as he tries to time-up a hook shot, Beekman explodes off the floor and blocks the shot.

Of course, Williams is able to recover; he gets rebounds his own shot not once but twice before finishing the possession with a crucial bucket.

Finally, with the Demon Deacons pulling away, Williams drags Beekman to the post one last time. Virginia doesn’t send help. Once more, Williams uses his strength and shoulders to shove Beekman back, create a little space and deposits another score at the rim.

Unfortunately, this is the only scheduled game between Wake Forest and Virginia this season, although the possibility of an ACC Tournament matchup exists. With that said, this could very well be the only shot for Alondes Williams vs. Reece Beekman: the ACC’s top driver and the ACC’s top perimeter defender. Neither side disappointed over the weekend.

The next time these two see one another on the floor, it may be with both guys wearing NBA uniforms.

Deacons check in at No. 3 in this week’s ACC Power Rankings