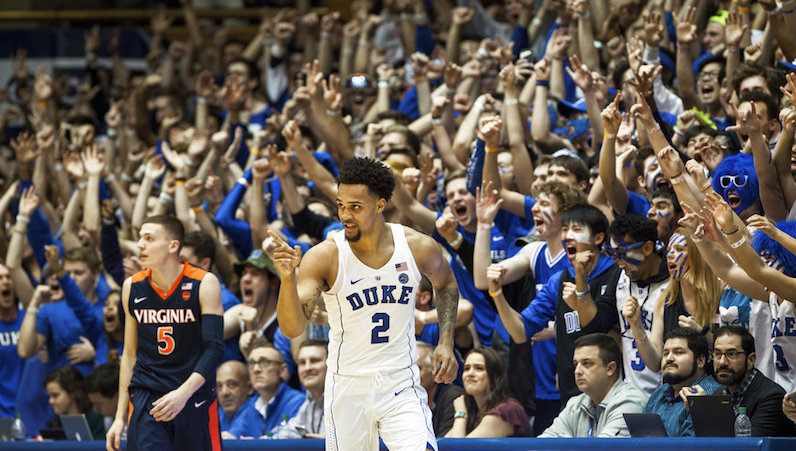 Duke’s Gary Trent, Jr. (2) points to a teammate after hitting a three-pointer during the second half of an NCAA college basketball game against Virginia in Durham, N.C., Saturday, Jan. 27, 2018. Virginia defeated Duke 65-63. (AP Photo/Ben McKeown)

Dating back to the 1992-93 season, only two ACC freshman have attempted at least five three-pointers per game, and shot at least 42 percent on those attempts. Back in 1994-95, Curtis Staples hit those benchmarks at Virginia; a few seasons later, Robert O’Kelley did the same at Wake Forest in 1997-98.

It’s been 20 years, but a new player is on pace to join this club: Duke’s Gary Trent.

The Blue Devils run the offense through Marvin Bagley and Wendell Carter; of course, Grayson is a high-usage and important piece on wing as well. Trent, however, is a wonderful spacing agent for this squad; his shooting and movement without the ball are critical for a Duke team that just doesn’t get up as many three-pointers as past teams. It’s a big part of why Duke ranks second nationally in adjusted offensive efficiency.

Trent is well on his way to hitting this benchmark, too, with relative ease. In ACC play, the rookie wing has taken his game to another level: nearly 60 percent of his field goal attempts have come from beyond the arc (7.5 per game), and he’s connected on 49.3 percent (37-of-75) of those bombs. That ranks fourth in the league in ACC games.

Currently, there are only three freshman in Division I basketball shooting 40 percent or better on at least six three-point attempts per game: Oklahoma’s Trae Young, Taylor Funk of Saint Joseph’s and Gary Trent.

Obviously, Young shoots a higher volume of three-pointer that are contested and/or off the dribble; he’s shooting more difficult shots than Trent. However, to be lumped into a range shooting category with Young is still rather impressive. (Getting to playing alongside Bagley and Carter certainly doesn’t hurt here — gravity, son!)

Over the last eight seasons, going back to 2010-11, Duke players have hit six or more three-pointers in a game 29 times. In only 22 career games, Gary Trent accounts for four of those performances — more than Seth Curry, Luke Kennard, Ryan Kelly, Jayson Tatum and Austin Rivers.

In fact, the only two Duke players to have more games of 6-plus triples are Grayson Allen (6) and Andre Dawkins (6). But both of those guys played over 120 career games. Quin Cook also had four career games of six or more three-pointers, too.

In the words of David Fizdale: “Take that for data!”

According to Synergy Sports, over 73 percent of Gary Trent’s attempts in the half-court have been jump shots. He’s been efficient on these looks, too. Trent is shooting 37.8 percent on these looks, with an effective rate of 52.4 percent — good for 1.05 points per possession, per Synergy.

Trent is one of only eight players so far this season to score at least 150 points in the half-court on jump shots. Here’s a look at the others:

The catch-and-shoot is his preferred method of getting the ball to the rim, too. According to Synergy, 98 of his 143 half-court jump shots are catch-and-shoots, and he has an effective shooting rate of 60 percent.

The only two other freshmen in the top 20 of this group: Parker Stewart and Marcus Carr of Pittsburgh.

Gerald Henderson: For Duke to go far, they need Grayson Allen at his best