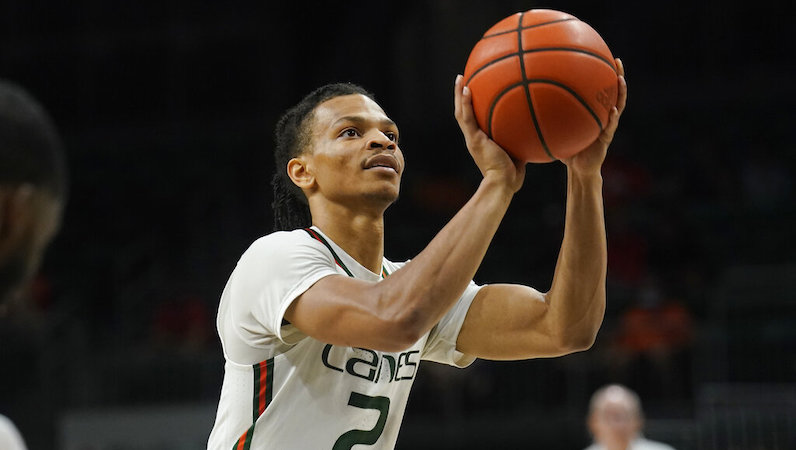 The last four years have been a long, winding path for Miami basketball. However, with the score-first backcourt of Isaiah Wong and Kam McGusty, the Hurricanes are relevant, once again.

Miami enters play this week with an 11-3 (3-o ACC) record and a top-25 offense in terms of adjusted efficiency. While Wong and McGusty have carried the load, the veteran guards have had plenty of help, too, thanks to a couple key offseason additions and tweaks on offense.

Wong and McGusty are both high-usage, high-octane guards who can use their handle to score from multiple levels of the floor. For years now, Miami has been a spread pick-and-roll offense. This strategy allows the Hurricanes to keep it simple on that side of the floor: cut down on turnovers, while keeping the ball in the hands of your best players.

Over the last three seasons, Wong and McGusty have both certainly scored a lot of points in this setup.

As expected, Miami has limited its turnovers: 14.2 percent turnover rate, which ranks No. 11 nationally, according to KenPom. Now, though, the Hurricanes are playing with added pace (16.9 seconds per offensive possession), while mixing in new wrinkles on offense.

Miami still runs a lot of pick-and-roll; that’s the backbone of the offense. However, the actions are less static this season; there’s more pace and space.

With solid secondary shooting and playmaking, it’s harder for opponents to keep Miami’s screen-roll activity on one side of the floor.

As a result, McGusty and Wong are averaging 18.3 and 16.5 points per game, respectively. Both guards currently have usage rates above 23 percent and effective shooting rates of at least 55.5 percent.

Those numbers rank No. 1 and No. 2 in the ACC in terms of PnR efficiency. (Among players with 40+ possessions, only Virginia Tech’s Storm Muphy is averaging at least 1.0 PPP.)

Both numbers rank inside the top 25 nationally (40+ possessions), too.

During the 2020-21 season, Miami played Wong and McGusty together for 582 minutes. The Hurricanes were outscored by 59 points in those minutes and posted an offensive rating of only 104.1 points per 100 possessions, according to Pivot Analysis.

So far, that’s shifted this season. With Wong and McGusty on the floor together in the 2021-22 season, Miami is +35 in 383 minutes. During those minutes, the Hurricanes have an offensive rating of 119.1 points per 100 possessions, which is outstanding.

(If you remove the 32-point loss to Alabama, Miami is +52 in 356 minutes with Wong and McGusty on the court together.)

Miami’s defense doesn’t foul often, either, which has long been a trait of Jim Larranaga’s ball clubs. That’s helpful, too. Essentially, the Hurricanes won’t beat themselves.

Miami is unbeaten in ACC play thanks in part to a home win last week over NC State. The 91-83 victory was of the comeback variety, too. That comeback was fueled by Isaiah Wong and Kam McGusty taking over, while running the exact same play on eight straight half-court possessions: Horns Twist.

With 8:20 left to play and Miami trailing by four points, Miami went to its Horns Twist action.

In theory, this is a good way to generate a switch and a create/isolate vs. a specific mismatch. That’s exactly what Miami looked to exploit against the Wolfpack.

Here’s the very next possession: Jordan Miller screens for Wong, which NC State switches. Jericole Hellems and Casey Morsell then switch behind the action, too, as Wong enters the second ball screen from Anthony Walker.

With a step on Morsell, Wong glides in for a layup.

Again, on the next possession, it’s Horns Twist; this time, though, McGusty has the joystick in his hands. McGusty takes the switch on, gets in the paint and gets a shot up on the rim, which Anthony Walker finishes off with a put-back 2.

Another trip down the floor, now with a 3-point margin, Miami goes Horns Twist, again. Wong gets Hellems on another switch, and the NC State forward gives Wong too much airspace. The All-ACC guard swiftly uses this room to splash an off-dribble 3.

Now it’s McGusty’s turn to run the show. The Hurricanes again create the switch with Hellems. McGusty gets in the lane, spins to his right, draws help and kicks out to a wide-open Wong for a 3-ball.

Even when Miami grabbed the lead, Larranaga continued to spam the Horns Twist again with Wong — again and again.

This time, Wong gets matched with freshman guard Terquavion Smith on the second switch and goes straight to the rim.

It wasn’t until that last Wong bucket at 3:18 that NC State made an adjustment and stopped switching directly into matchups that Miami wanted.

After a timeout, Kevin Keatts had the Wolfpack trap Wong after the second ball screen — with Hellems and Cam Hayes. Wong, however, was able to throw a miraculous cross-court skip pass that Miller caught in rhythm and drilled for yet another 3.

If you do the math, Miami ran this action on eight straight half-court possessions. The Hurricanes scored on seven of those possessions, including five field goals and an assist from Wong, for a total of 17 points (2.13 points per possession).

More 5-Out and Isaiah Wong

One of the things Miami’s done to both space the floor and create some movement before launching pick-and-roll action has been using more 5-out concepts. When fully healthy, the Hurricanes feature a four-man rotation at center: sixth-year senior Sam Waardenburg (42.3 3P%), Rodney Miller (another sixth-year senior), Deng Gak and Walker.

All four guys offer different attributes. Waardenburg is a solid floor-spacer/stretch-5. Miller is a pretty good pick-and-roll dive finisher. Gak is a rim protector. The 6-foot-9 Walker is one of the better frontcourt athletes in the ACC: 2.2 blocks and 1.6 steals per 40 minutes.

Miami has used a lot of what some basketball minds refer to as “Delay,” a 5-out look on offense that features the center launching the action. Here’s a look at Gak doing exactly that — as Miami flows from its Delay set into Chicago action for Wong.

“Chicago” action is an offensive maneuver that involves three players, working together. The lingo (“Chicago”) is short for a pindown screen for an off-ball player (Wong) who runs directly into a dribble-handoff (DHO) with the player who currently has the ball (Gak).

Here’s another Delay Chicago design for Wong — who comes off a pindown from Charlie Moore and into the DHO with Walker.

UNC has run some Chicago action for Caleb Love this season, too. The action forces the chase defender to trail Wong through two separate screens. This puts the defender further behind the action and allows Wong to pick up some momentum before getting downhill or into his bag.

When opponents rotate help at the nail vs. Wong, he has an obvious read: kick out for a spot-up 3-point attempt.

From the Clemson game: Miami runs Chicago action for freshman point guard Bensley Joseph, moving to his left hand. Joseph (7-of-9 3PA this season) kicks it to Wong and then relocates for a 3-pointer.

The Hurricanes can get into other stuff out of Delay, too. Occasionally, Miami will have the first screener slip when the center dribbles in that direction, which instead turns into an empty-side handoff action.

Miami will utilize another 5-out look to open up driving lanes for Wong — a staggered pindown set on the weak side, which can be referred to as “Strong.”

McGusty comes off staggered screens from Walker and Gak. Walker twirls back behind another screen from Gak, fakes a handoff to Joseph and dribbles all the way across the floor and into a DHO with Wong.

Wong really does have the ability to get busy with his dribble vs. any defender. Unless he’s matched with an elite on-ball defender — like Virginia’s Reece Beekman, who gave him troubles last season — Wong will light up just about any matchup.

This time vs. Wake Forest, Miami moves from a Horns alignment and into another Strong look. However, this movement essentially serves as a clear-out for Wong, who goes to work vs. Alondes Williams.

Miami Action: Speaks For Itself

The Hurricanes love this look, which comes out of a little Box Set-type design. The strong-side guard (McGusty) on the low block will start the possession by running up off a zipper screen and receiving a pass from the point guard (Moore). As that happens, the weak-side guard (Joseph) will lift off the opposite block and enter the handoff action with McGusty, before dribbling into a ball screen from Walker.

This isn’t fixed spread pick-and-roll action. Miami has all five players on the floor moving and screening with one another before launching the ball screen action.

Of course, Wong is especially dangerous when he’s the target being used as the ball handler/finisher in the Miami action.

Wong’s in-between/hesitation moves are so damn good. He sells this stuff with his eyes, movement and little head fakes. Opponents must be wary of Wong’s step-back shooting capabilities, too, which he can leverage to open up all kind of creases to the rim.

Wong can also opt to just keep it on some of these looks — breaking off the action when he sees something to exploit. For instance, on this possession, Wong redirects and skips the ball to the corner for another Miller 3-pointer.

So far, Miller has proven to be an underrated addition for Miami last offseason, too. After three seasons at George Mason, the 6-foot-7 Miller has played superb basketball as Miami’s de facto stretch-4. Miller spaces the floor (39.4 3P%) and shoots an easy ball — one with a quick release and good rhythm.

There’s a solid back-and-forth with Miller and Wong or McGusty. Miller’s shooting helps space the floor and open driving lanes for the dynamic duo; in turn, Wong and McGusty can make life easy for Miller by driving to the hoop and passing out for open jumpers.

Miller is more than just a catch-and-shoot player, though. He can play with the basketball some, too, and he’s a super-active team defender: 2.7 percent block rate, 2.6 percent steal rate. Miller will fight like crazy to cause chaos on post entry passes and while chasing shooters around screens.

The synergy of Miami’s roster has been fun to chart this season. Isaiah Wong and Kam McGusty are great talents who can create decent looks at the rim on most trips down the floor. However, those two must be able to amplify the surrounding talent around them, while those secondary players also help ease the offensive pressure on McGusty and Wong.

Over the next two months, the schedule will start to pick up for Miami. Early on this season, the Canes struggled vs. tougher non-conference competition: defeats vs. UCF, Alabama and Dayton.

There are some defensive issues that will likely persist, too, due to roster construction, although more minutes with Miller and Walker as the 4/5 could help. Miami isn’t a good defensive rebounding team, but loading up on athleticism and speed could solve some of the troubles.

Regardless, it’s nice to see Isaiah Wong put together a strong junior season as Miami returns to the upper half of the ACC.

Miami up to No. 4 in this week’s ACC Power Rankings