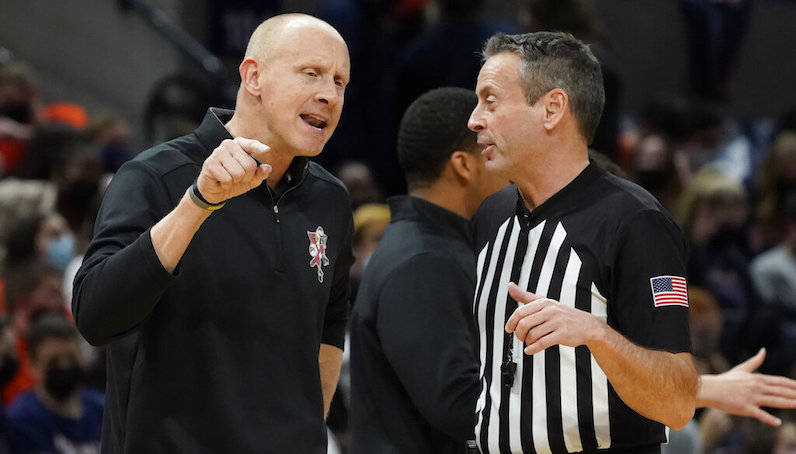 As expected, Chris Mack is out as the head basketball coach for the Louisville.

The decision comes two days after his final game with the program; Louisville lost on Monday to Virginia, 64-52. The coda for the Mack era was the team’s fifth loss in its last six games.

The University of Louisville’s Board of Trustees met on Wednesday to finalize the terms of Mack’s separation agreement.

Chris Mack is out as Head Coach at the University of Louisville.

We just spoke to him outside the athletic facility. Here are his comments. pic.twitter.com/XbPX7W0FiM

There’s a feeling of “Where did this all go wrong?” when it comes to Mack and Louisville. After a decade of success at Xavier, Mack was a welcomed addition to the program in 2018; it would be his job to advance Louisville beyond Rick Pitino.

Mack did plenty of winning while at Louisville; he won 64.8 percent of his games (68-37). During the 2018-19 season, his first with the Cards, Louisville climbed to No. 15 in the AP Poll. Jordan Nwora and Dwayne Sutton turned into stars. Louisville made the NCAA Tournament, but lost in the first round to Minnesota.

The following year marked the high-water mark for Mack. That year, Louisville went 24-7 and spent one week ranked No. 1 in the AP Top 25 Poll. However, with the NCAA Tournament cancelled due to the COVID-19 pandemic, there was no postseason for Mack and the Cards.

It’s expected that Mike Pegues will once again assume interim head coaching duties for Louisville. Pegues coached the first six games of this season, while Mack served a suspension for his handling of former assistant coach Dino Gaudio’s extortion attempt.

Mack wrapped things up by saying he has nothing but love for Louisville and it’s fans and of course, wishes the best for Mike Pegues. pic.twitter.com/EV0P79F2cN

Louisville will play next on Saturday — with the Duke Blue Devils coming to town.

More on the offensive progression of Virginia guard Reece Beekman