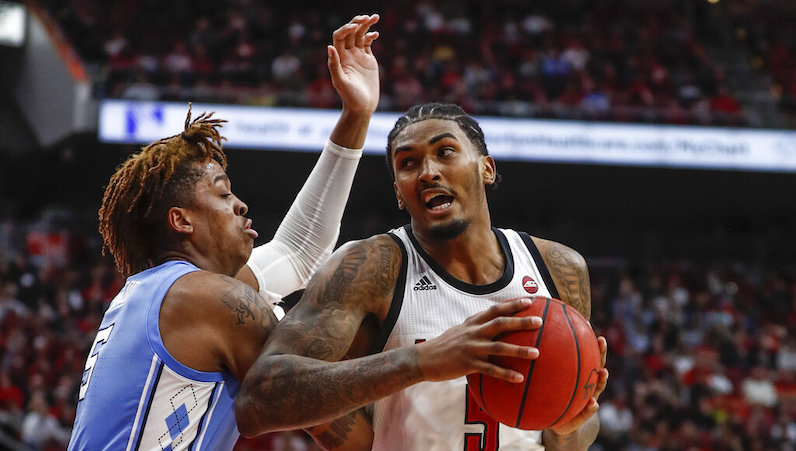 A bumpy senior season continues to unfold for Louisville center Malik Williams. The three-time team captain has been suspended for the North Carolina game, according to interim head coach Mike Pegues.

According to Pegues, who made the announcement on his weekly radio show, Williams “hasn’t met Louisville’s standard.”

Malik Williams is out for the North Carolina game, Mike Pegues said on his radio show. Says Williams hasn’t met Louisville’s standard and different times throughout the year. It’s an indefinite suspension.

Pegues has left the door open for Williams to return; however, the suspension could shift from indefinite to permanent, which would be an unfortunate ending for the longest-tenured player on the team’s roster.

In terms of the more immediate future, this is a key absence for the Cards vs. North Carolina.

The Tar Heels aren’t the same offensive rebounding force as years past, but UNC can still do damage on the glass. Led by junior center Armando Bacot, the Heels have rebounded 30.9 percent of their missed shots this season.

Bacot, however, ranks No. 41 nationally, according to KenPom, with an offensive rebound rate of 14.2 percent.

Williams leads Louisville in both scoring (10.0 points per game) and rebounding (8.7 per game). The veteran center is one of the top defensive rebounders in the country, too: 28.7 percent defensive rebound rate, a top-15 number in Division I.

Bacot is also an elite low-post finisher. According to Synergy Sports, Bacot has scored 1.11 points per post-up possession this season (55.3 FG%), which ranks No. 3 nationally (100+ possessions).

With Williams on the bench, that number balloons up to 114.2 points per 100 possessions.

Sydney Curry doesn’t have the length or stretch shooting capabilities of Williams. However, Curry has played good ball in recent weeks; the 6-foot-8, 260-pound forward/center should see more playing time. Curry has the power to compete for turf with Bacot.

He’s strong as hell, but also moves rather quickly on the low block. Curry’s shown flashes finishing out of the pick-and-roll. There are even some short-roll abilities, too. When he gets rolling with the left hand, Curry is really good finishing over his right shoulder.

Louisville could try more 4-around-1 lineups with Curry as the lone true big man on the floor; hybrid wings like Dre Davis, Matt Cross and Samuell Williamson offer some lineup variability.

With North Carolina primarily using stretch-4 Brady Manek next to Bacot, teams can look to play a smaller guy on Manek. This isn’t to say that Manek can’t take defenders to the post and score inside of 10 feet. Manek scores from multiple levels; however, the stretch shooting is the big concern. A smaller defender — like Davis, who is a dog defensively — can hang in space and run Manek off the 3-point line.

(I realize that Alondes Williams ends this possession with a spike at the rim, but Davis does a nice job standing up the post attempt from Wake Forest’s Jake LaRavia, another hybrid forward with a multi-layered game on offense.)

Pegues could also try these 4-around-1 lineups with Jae’Lyn Withers, a redshirt sophomore who has struggled this season. The Williams-Withers duo never quite worked together on offense, which was a concern of mine in the offseason.

During the 2020-21 season, Withers played a lot as a small-ball center; in those alignments, he took advantage of being the lone post guy/rim-runner on the floor with NBA guards Carlik Jones and David Johnson. Louisville no longer has that type of on-ball playmaking, but it’d be nice to see Withers find a groove, especially if he sees more time as the de facto 5-man.

The Cards could play Withers and Curry together, of course. Those two have shared the floor for only 44 minutes this season (Louisville -6). However, this an opportunity to see if those guys can develop some chemistry.

Freshman center Roosevelt Wheeler has appeared in 15 games this season, in a very limited role: 100 total minutes, 28 points and 26 rebounds. Wheeler is long and there’s intriguing defensive upside; the 6-foot-10 rookie has four steals and four blocks to his name.

In terms of pick-and-roll defense: when Wheeler starts with good initial positioning, he can be disruptive.

Like plenty of other young big guys, though, Wheeler can struggle in space or take a bad angle. Other times, Wheeler is there at the level of the screen, but it doesn’t even matter when the back-side rotations and tags aren’t there from his teammates.

Curry gives Louisville some variety in terms of ball-screen coverages. The lefty can hedge, show or play to the level. He’ll get more reps in the absence of Williams. So, too, will Wheeler, especially if Williams is gone for more than one game.

JJ Traynor was a legit part of Louisville’s rotation last season, but he’s played just 13 minutes this season. Additional playing time for Traynor would be nice to see, although the matchup with UNC’s bulk isn’t ideal.

There’s also Gabe Wiznitzer, but he’s played just 17 minutes all season. Wiznitzer has appeared in a game since the middle of December, too.

Obviously, the suspension of Williams has more to do with the intangibles: “the character and the integrity in our locker room,” as Pegues described it. Stuff like that goes beyond basketball, and matters beyond the remainder of the 2021-22 season.

In the meantime, though, no Malik Williams — for however long that may be — opens the floor up for new possibilities and could reinvigorate some of Louisville’s lesser-used frontcourt options.