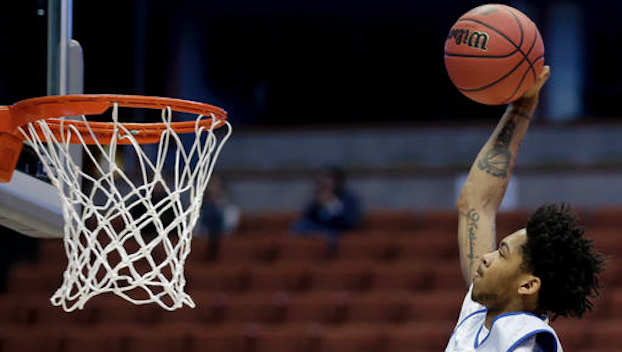 Brandon Ingram is expected to be the No. 2 pick in tonight's NBA Draft. (AP Photo)

DURHAM, N.C. – Following an All-America freshman season in which he established himself as a finalist for multiple national awards, Duke’s Brandon Ingram will enter the 2016 NBA Draft. Ingram announced his intentions on Monday morning in a piece published on The Players’ Tribune.

“Brandon Ingram was a special player at Duke this year, and his best basketball is still ahead of him,” Duke head coach Mike Krzyzewski said. “He is a no-maintenance player who loves the game, has a strong desire to get better and competes every time he steps on the floor. Brandon is also a creative and thoughtful young man who comes from a beautiful family. We’re proud that he’ll always be a member of the Duke basketball family as he pursues an exciting future in professional basketball. I have absolutely loved coaching Brandon.”

In addition to earning honorable mention All-America accolades from the AP, Ingram was also recently named the third USBWA Freshman All-American in Duke history, alongside Parker (2014) and Okafor (2015).

A second-team All-ACC selection and the 2016 ACC Freshman of the Year, Ingram averaged 17.3 points, 6.8 rebounds and 1.4 blocks in 34.6 minutes per game this season. He shot 44.2 percent from the floor and 41.0 percent from three-point territory.

With 624 points, Ingram finished the season as the third-highest-scoring freshman in Duke history, while his scoring average of 17.3 per game also tied for third-best by a Duke freshman.

Ingram’s eight double-doubles on the season were the fifth-most by a freshman in Duke history, and his 14 20-point games tied for the second-most ever by a Duke rookie. He had three 20/10 games on the season, and was the lone ACC freshman to record one.

One of the nation’s most versatile players, Ingram was the first freshman and only the second player – along with Shane Battier – in Duke history to make at least 80 three-pointers (80) and block at least 40 shots (49) in the same season. His 80 three-pointers on the season were the second-most by a freshman in Duke history, while his 49 blocks ranked fifth on Duke’s freshman chart.

Ingram’s 1,246 minutes played this season ranked third on Duke’s freshman chart, while his average of 34.6 minutes per game ranked fourth and was the highest by a Duke freshman since Tommy Amaker in 1984 (36.3).

Duke has produced at least one first-round NBA Draft pick in each of the last five years. Krzyzewski has mentored 31 first-round picks, including 20 lottery selections – both of which are the most among active coaches. The 2016 NBA Draft will be held on June 23 at Barclays Center in Brooklyn.