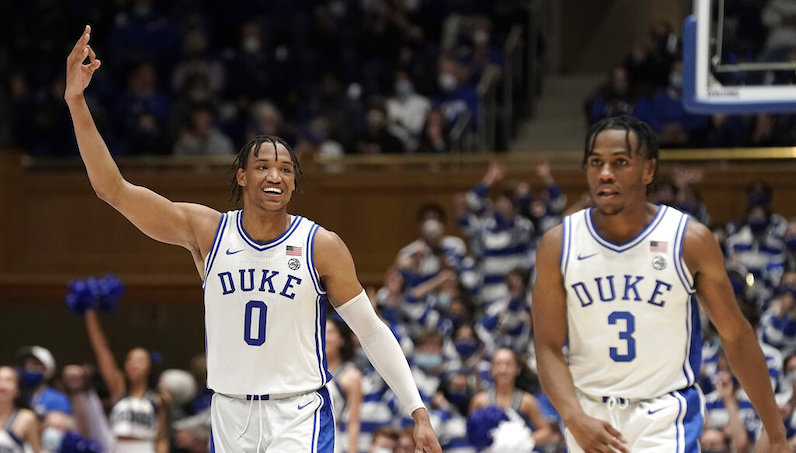 With a signature win over Kentucky, Duke is 3-0 to start the season. In the midst of this early undefeated start, the Blue Devils have flashed a fun style of play — with multiple playmakers on offense. Duke ranks inside the top 15 nationally in both offensive and defensive efficiency.

In his final season at the helm, Mike Krzyzewski has one of the top teams in the country. Let’s take a look into a couple early-season trends and new developments for the Blue Devils — start with Paolo Banchero and Wendell Moore Jr.

During the first two games of the season — wins over Kentucky and Army — Paolo Banchero played all of his minutes as Duke’s insanely-talented playmaking 4. Over that stretch, in 58 minutes with Banchero on the floor, he played with either Mark Williams (+11 in 39 minutes) or Theo John (-3 in 19 minutes), per Pivot Analysis.

In the Campbell game, though, Duke faced one of the top offenses in the Big South Conference. Campbell runs a spread motion offense, which includes plenty of high-post initiation from the center position. This makes it a tough matchup for the 7-foot Williams, who can play in space some but is far better when planted closer to the basket.

To counter all of the off-ball motion and cutting actions, Duke elected to play smaller: Banchero at the 5 and another guard/wing on the floor. In fact, Duke played the majority of the game with Banchero at center: +11 in 25 minutes.

While the Blue Devils have dabbled with selective switching with Williams and John, this approach allowed for more free switching on defense.

Banchero looks capable as a switch defender; he moves so well in space. On some possessions, Banchero switched multiple times — before closing things down with a block or rebound.

Coming out of a timeout late in the first half vs. Campbell, Duke started to utilize a weave action before launching into designed post-up looks for Banchero — with a spaced floor. While the quartet of Moore, Trevor Keels, Jeremy Roach and Joey Baker wove the ball around up top, one of the wings would sneak in on the underside of the play and set a little cross screen for Banchero.

Duke will occasionally mix in some weave action for its half-court offense. During a 2020 matchup with Louisville (the David Johnson game), the Blue Devils used the weave to launch spread pick-and-roll looks for Tre Jones.

Those cross screens may seem simple; however, it’s an effective instrument for carving out deeper post position. With the additional spacing around him, Banchero went to work.

There aren’t many player in college hoops that can handle Banchero 1-on-1 in the post. P5 brings a sensational blend of power and short-space skill to the table. Banchero can outmuscles players in the post or finish through contact, if not met with enough force.

When defending Banchero, simply keeping him away from the paint and further off the block isn’t enough, though. His shooting touch is quite good, especially in the short midrange area. (Banchero is also shooting a tidy 88.2 percent from the free throw line.)

Given his touch and free throw percentage, Banchero seems like a candidate to add a reliable 3-point jumper at some point in his career.

So far this season, on post-up and isolation plays, Banchero has scored a combined 1.41 points per possessions (80 FG%), according to Synergy Sports. These are monster numbers.

This is a gorgeous diagonal hi-lo pass from Moore; Banchero’s seal is solid, too. However, this is where the small-ball offense can really hurt opponents: with Baker and Keels spaced to the wings, look how much room Banchero has to operate.

As Banchero has flashed a variety of different tools in the toolkit this season, one really stands out: the stutter rip. In the Basketball Twitter Universe, no one is a more prominent proponent of the stutter rip than my guy PD Webb. In ACC Basketball circles, though, no one comes close to matching Banchero’s craft and force with this move.

The stutter rip is essentially a face-up shimmy move. A player will catch the ball out along the perimeter or face-up in the mid-post, bring the ball above their waist and below the head, and rock it quickly, back and forth, before looking to drive.

The stutter rip can be used to get a 1-on-1 defender on their heels and exposed for a downhill drive. Or it can be weaponized as a way to create space/separation before an off-dribble jumper.

Banchero has hit this move at least once in every game so far this season.

During the Campbell game, Banchero went to the stutter rip on multiple occasions. It’s another avenue for creating contact. Through the first three games, Banchero has drawn an average of 6.1 fouls per 40 minutes, according to KenPom.

As Duke continues to experiment with different matchups and lineup combinations, the small-ball looks with Banchero at 5 will be very dangerous.

If AJ Griffin could get to like 90 percent of his pre-injury talents and force, then Duke’s small-ball groups could turn into some of the best lineups in the country. That’s how this option gets fully optimized: Griffin in (near) full flight.

Regardless, the stutter rip could become Banchero’s defining move, going forward. It speaks to how his future NBA home will be able to utilize him, too. Banchero projects as a half-court hub of offense — a player capable of having actions run through him at the elbow or above the break.

Wendell Moore: More of Everything

Banchero is the headliner at Cameron Indoor Stadium; however, Duke’s quick start must also be framed within the context of a wildly important leap from Wendell Moore Jr.

A former 5-star talent, Moore is the only player left from Duke’s 2019 recruiting class. While there have been plenty of intriguing flashes during his time at Duke, including a solid finish to the 2020-21 season, this a different player.

Moore is leading this team and controlling the action on both sides of the floor. Part of his new playmaking package is an improved vertical burst. Duke worked with Moore on altering his footwork and running patterns over the offseason. Those adjustments, along with another year of player development (he always been pretty strong), have produced some profound results.

Over the course of his first two seasons at Duke, Moore recorded six dunks in 49 games. Through the first three games this season, Moore already has four dunks, including this gorgeous fake DHO keep vs. Campbell. Duke using these Pistol/21 concepts with Moore and Keels should do damage all season.

The Blue Devils poke and prod opposing defenses with multiple ball handlers. Duke starts four players capable of orchestrating offense: Roach, Keels, Banchero and Moore. It’s quite the luxury to be able to move the target around like this on offense; however, Moore is the unquestioned ringleader.

Moore ranks second on the roster in usage rate: 24.3 percent. He’s also one of only four ACC players with an assist rate above 33 percent (7.1 assists per 40 minutes).

This is big-time improvement. The numbers certainly look good, too, but WMJ as a primary creator passes the eye test as well.

There’s an ease — a comfort level — with his on-ball decision-making.

Moore is seeing things develop a step ahead and making layered reads with his passes. This isn’t the same guy who was thrust into a backup point guard role two years ago when Tre Jones missed a couple of games, although those reps certainly didn’t hurt.

With his improved athleticism and functional handle, Moore is touching the paint on a regular basis this season. Duke’s offense needs it. Outside of a Banchero post-up, that may be the best path for creating offense in a pinch.

When WMJ touches the paint, he’s finding teammates and distributing with precision.

With Duke’s multi-pronged offense, it’s important for each player on the floor to move when they don’t have the ball. As Moore has seen a major uptick in his usage and creation responsibilities, he’s managed to still cut and move with gusto while off the ball, too.

This is great half-court spacing from Duke, but look at how much ground WMJ covers to hunt this catch-and-shoot corner 3. It’s obvious that the game has really slowed down for Moore.

Moore has also dazzled this season as an open-floor passer in transition. During his freshman year, Moore played alongside Tre Jones, one of the great hit-ahead passers in recent years. Now, he’s looking to carry on that tradition. Moore’s long-range hit-ahead passes have been sensational through the first three games.

Obviously, Duke wants to run whenever the opportunities are present. Moore’s hit-ahead passes have been a super-charger for this type of transition activity.

The most efficient shots to take are dunks/layups and spot-up 3-pointers. Those types of looks become ever more valuable in transition. So far, Moore has gotten greedy in the best way possible when it comes to gunning for early fast-break offense.

Wendell Moore isn’t the only returning Duke player to make a leap of sorts, though. Before the start of the 2021-22 season, I wrote about the importance of Jeremy Roach. The Blue Devils didn’t need Roach to become a mega-watt creator for their offense. With plenty of ball handlers on the roster, Duke wouldn’t want a heliocentric approach for half-court creation — as was the case with Tre Jones in the 2019-20 season.

Instead, Roach would need to hit spot-up 3-pointers and drive the ball when the offense called on him for initiation. So far, so good: Roach has played well and kept the ship humming.

Roach is listed at 172 pounds, but he’s a physical driver when slashing to the basket. It’d be hyperbolic to describe Roach as a power driver, but he’s stronger than he looks and a durable finisher in traffic.

Roach has shown off some nice craft this season, too. He’s flipped in reverse and inside-hand finishes, which help him attack shot blockers in the restricted area.

According to Synergy, Roach has scored 0.92 points per pick-and-roll possession this season.

Roach being willing and able to take defenders on and get into the paint is a big deal for Duke. This type of advantage creation from Roach is meaningful: he has the ability to force defenses to bend and move.

When Roach is able to collapse the defense, it makes things so much easier for everyone else. Williams and John lurk as dangerous targets in the dunker spot when the opposing center steps up vs. Roach — either a drop-off pass or a lob. This look is there all season.

Of course, Roach can also kick it out to Keels or Moore for spot-up looks or closeout attacks. Either way, it’s good offense.